Could Maryland’s Road to the Final Four Go Through The Northeast? 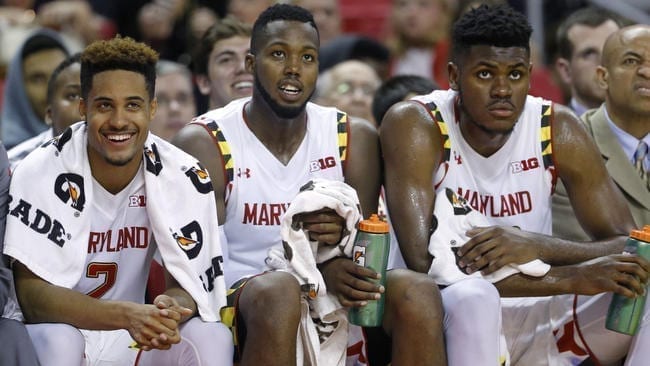 Every Maryland fan remembers the 2002 NCAA Tournament for obvious reasons. But what you might not remember is that tournament being the first year of the “pod system,” designed to keep the top 4 seeds in each region (the “protected seeds”) close to home for the opening weekend of the tournament.

In rare cases, a top team hits the lottery by getting a close-to-home pod for the first weekend and then they get to play in a regional that just so happens to be incredibly local. In the 2005 NCAA Tournament, the number one overall seed Illinois got to play the Sweet 16 and Elite 8 in their home state of Chicago after a short 118 mile trip to Indianapolis in the first two rounds. In 2008, the top overall seed North Carolina didn’t have to leave the state on its Road to the Final Four, playing the opening rounds ten miles from campus in Raleigh before the East regional in Charlotte. UCLA didn’t have to leave the state of California as 2 seeds in the 2006 and 2007 West Regions, going through San Jose and Oakland in 06 before Sacramento and San Jose in 07. And in a weird coincidence, 2003 featured a pair of 3 seeds who didn’t have to travel more than 350 miles in either of their two weekends of regional play; Syracuse got to play in Boston before the East regional in the capitol of its home state, Albany while Milwaukee-based Marquette got to go through Indianapolis and Minneapolis.

All six of those teams – 2005 Illinois, 2008 North Carolina, 2006/2007 UCLA and 2003 Syracuse and Marquette – made the Final Four. And Maryland has a real opportunity to join that group, as it could play its first and second round games in Brooklyn (220 miles from College Park) and then if it gets placed in the East Regional, the Sweet 16 and Elite 8 games would be just a two hour drive up I-95 to the Wells Fargo Center in Philadelphia (126 miles from College Park.)

It’s important to note before we dive too deep in to this that the Terps are still just a 3 seed in Wednesday night’s updated Bracket Project. However, they’re only projected to lose 1-2 more games in the regular season. That would leave them with just 4 or 5 losses going in to the Big Ten Tournament (and a possible conference title), where a deep run could lock up a 1 or 2 seed. That would obviously be ideal for pod purposes unless they luck out like Carmelo Anthony and Dwyane Wade did thirteen years ago.

I wrote a piece for Rush the Court two weeks ago that explored this year’s subregionals and the teams who might get to play at them. As it was two weeks ago, some of them are all but set in stone already. Oklahoma’s going to be playing in Oklahoma City. Iowa will play in Des Moines, Kansas will either join them there or go to St. Louis and Villanova will be in Brooklyn. Will Maryland join them?

As it stands, the Wildcats have a better resume than Maryland. They’re five spots better in RPI (2 vs 7), they have double the top 50 RPI wins (4 vs 2), as well as four more top 100 wins (11 vs 7) and they’re 6-1 in true road games while Maryland has only now peaked its head above .500 with last night’s win at Nebraska to get to 4-3 (oh and there’s that head to head victory for good measure.) Especially considering that Villanova can’t play on its home court in the East regional, I’m sure the committee will be extra motivated to give them their preferred opening weekend destination and that is surely Brooklyn.

The team who could steal the other Brooklyn spot away from the Terps? Providence. The Friars can’t play on their home court – which also happens to be a first weekend subregional – so if they’re a protected seed and the committee wants to keep them close to home, the only option is Brooklyn. There’s also the Kris Dunn factor. Surely the Barclays Center organizers would rather have the soon-to-be lottery pick running point in what might be his future NBA home for ticket selling and TV interest purposes.

Of course, that’s not to say that Maryland doesn’t have a large number of fans in the New York area or a special attraction point guard of its own but there are other palatable options for the Terps (Providence, Raleigh) that aren’t there for the Friars. But this likely will not come to pass, as Providence barely has a top 30 RPI and has failed to improve on the 5 seed it had on the Bracket Matrix when I wrote the RTC piece, despite adding the best win of the 2015-2016 college basketball season when it won at Villanova two days after that piece ran. The Friars somehow lost at DePaul this week and unless they complete their sweep of Villanova this weekend (or get red hot down the stretch/in the Big East tournament), they’re likely not a threat for a protected seed.

Unfortunately for Maryland, this year’s South Regional is in Louisville while the Midwest is in Chicago and there’s an absolute glut of teams in and around those areas who will end up as top seeds. Oklahoma, Kansas, Iowa, Iowa State, Xavier and Texas A&M will all be looking to play in one or both of those regions and as noted two paragraphs up, you can throw Villanova in to that pool. That means that North Carolina and Virginia – both of whom have campuses closer to Philadelphia than Louisville – are very real competition for the East Regional.

Maryland-Virginia-North Carolina are 7-8-9 in RPI in that order, but the Terps have just four regular season games remaining against RPI top 50 teams and none against the RPI top 25. On the contrary, every single game North Carolina has left on its schedule is against a top 50 opponent except for one (Boston College) and four of those are against top 25 opponents. It’s hard to see the Terps ending up with a better profile than the Heels unless UNC collapses completely. At least Virginia’s next three top 100 RPI games are on the road before two elite win chances in the final two home games of the season against UNC and Louisville but between that and what is sure to be a loaded ACC Tournament, the Cavaliers will probably eat enough losses to ensure they end up behind Maryland on the committee’s “s-curve.”

The good news is that it’s unlikely both the Heels and Hoos will end up ahead of Maryland on the committee’s “s-curve” if the Terps take care of their own business. That would probably require a UNC regular season title (they’re 2 games ahead of UVA) while Virginia wins the ACC Tournament while Maryland loses multiple games and/or exits the Big Ten tournament early. The other good news is that UNC is a virtual lock for Raleigh and Virginia could very likely join them there so neither looks to be a threat for Brooklyn unless Miami makes a serious push late to get Raleigh preference – and it’s hard to see Virginia remaining ahead of Maryland in the seeding pecking order in such a scenario (especially if Louisville – who would go to St. Louis – makes a push as well.)

Basically, the Terps have a great shot at one of the most ideal regional paths to a Final Four since the pod system was created in 2002. They appear to be clear favorites with Villanova to play in Brooklyn the first and second rounds of the tournament and while there are some teams and scenarios that could screw that up, they are unlikely. Better yet, Maryland looks to control their own destiny in terms of being the top seeded team on the East Coast – except for the one that can’t play in the East. As discussed, there’s going to be a bunch of Midwestern teams as top seeds and not all of them can play in the Midwest and South but the Northeast Corridor could very well be Maryland’s Road to the Final Four – and it could very well increase the Terps chances of making it to Houston if history repeats itself.