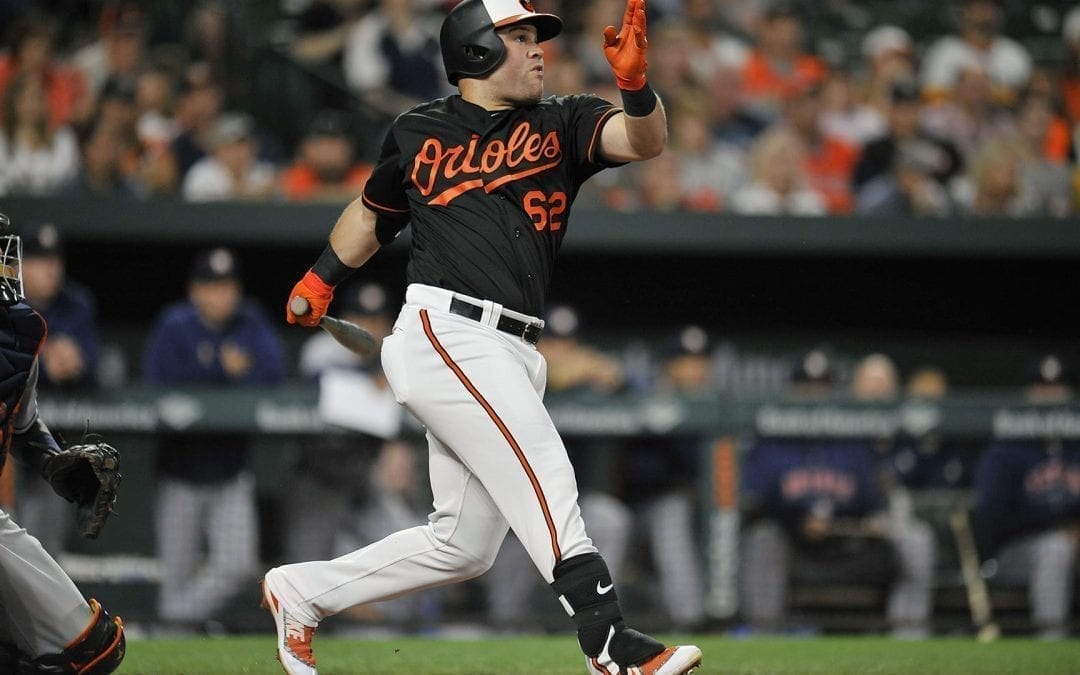 DJ Stewart is having himself quite the start to his 2019 season. Through 38 games and 161 plate appearances, Stewart is batting .285/.400/.562, which is good for a .406 wOBA and a 143 wRC+. Additionally, he has a higher walk rate (15.5%) than strikeout rate (14.3%). Except for batting average, Stewart leads all qualified Norfolk batters in basically every offensive category (including having the lowest strikeout rate), while also having the lowest BABIP of those same hitters. Stewart started off slow in April, hitting .202/.356/.345 in 24 games, however May has been an entirely different story, as to date he’s hit .435/.482/.957 in 14 games. That’s not a typo, he’s SLUGGING .957! Obviously, he’s not going to keep hitting as well as he has in May, but I think it’s time to send him up to the major leagues for an extended period of time to see how he performs.

Stewart was the Orioles first round pick in 2015, drafted 25th overall. At the time it wasn’t seen as necessarily a great pick (although not really a bad pick either). Stewart was generally seen as a player with a decent bat and on base skills, but he came with concerns about how much his power would play in the big leagues, as well as where he would fit defensively. Those concerns may still exist, although given that AAA is now using MLB baseballs (i.e. more dingers), the potential lack of in game power may not be as relevant as it once was. Stewart is the type of player for whom a “juiced” ball would benefit, and just looking at his career home run rates, it would be foolish to think that the ball didn’t have at least something to do with his 2019 power increase.

As I mentioned, while the AAA ball may be flying farther than ever, it’s the same ball that’s being used in MLB, so the power concern may not be as valid anymore, as long as the balls in MLB don’t become “un-juiced” all of a sudden. In fact, looking at the above table again, Stewart is hitting home runs at a rate in 2019 that is very similar to his rate during his brief time up with the Orioles last year. It’s probably more of a coincidence, but it’s worth noting.

As one would expect, Stewart’s HR/FB rate is also elevated compared to his minor league career levels (18.2%), though it’s comparable to his time at AA in 2017 (16.5%). Adding to that is the fact that he’s hitting more fly balls more than ever, except during his brief call up to MLB last year). This slight change in batted ball profile is encouraging, as Stewart should be hitting the ball in the air as much as possible, especially when considering the current nature of the baseballs being used in AAA and MLB. Adding in his ability to draw walks and put the ball in play, and the Orioles may have a decent player on their hands. However, they won’t be able to truly find out until they call him up. Fortunately, the Orioles are in a position where they can call him up and give him a long look in the big leagues. Unfortunately, there isn’t necessarily an obvious spot to put him.

Despite Baltimore having an (expectedly) abysmal season, the Orioles outfielders haven’t been all that bad. As a group, they’re tied for 19th in fWAR (1.3), and tied for 18th in wRC+ (98). Orioles outfielders have been “ok”, which is relatively good compared to the rest of the team. The one weak spot in the outfield has been in center, where DJ Stewart should not be playing for defensive reasons (not to mention the fact that Stevie Wilkerson is currently getting his audition in CF). The way I see it, there are two ways DJ Stewart can get regular playing time in the big leagues at the moment.*

1) Designate Chris Davis for assignment. This moves Trey Mancini to 1B and opens up a corner OF spot for Stewart.

2) Designate Renato Nunez for assignment. This moves Davis to full time DH, Mancini to 1B, opening up a corner OF spot for Stewart.

3) Option Rio Ruiz to AAA. Have Nunez be the primary 3B, move Davis to DH, Mancini to 1B, and Stewart to a corner outfield spot

*As much as optioning Joey Rickard should be considered an option here, doing that leaves the Orioles with only one person who can play CF (a person who had never played CF until a few weeks ago).

I don’t think Option 1 happens…yet, especially with Davis performing a little bit better lately. I also don’t think Option 3 is a great solution as Ruiz has been Baltimore’s 5th best hitter (and someone who also warrants an extended look in the big leagues). Unless the Orioles see something in Renato Nunez that the results haven’t shown, Option 2 is the best bet, as Nunez has been well below replacement level in 2019 and in all likelihood wouldn’t be missed if claimed on waivers by another team.

It’s entirely possible that the Orioles continue to let Stewart get regular at-bats in AAA until there’s either an injury or a trade that opens up a regular spot for him on the major league roster. That would be a defensible move for the organization, but I think it’s defensible to call him up sooner than that. Not only does his performance warrant it, but he’s already 25 years old. Stewart probably won’t be a part of the next good Orioles team, but it’s important that the organization determines whether he can be a productive major leaguer. And while they don’t have a direct opening in the corner outfield for him at the moment, there are number of different roster moves they could/should make in order to get him in the major league lineup. It’s the only way they’ll find out.