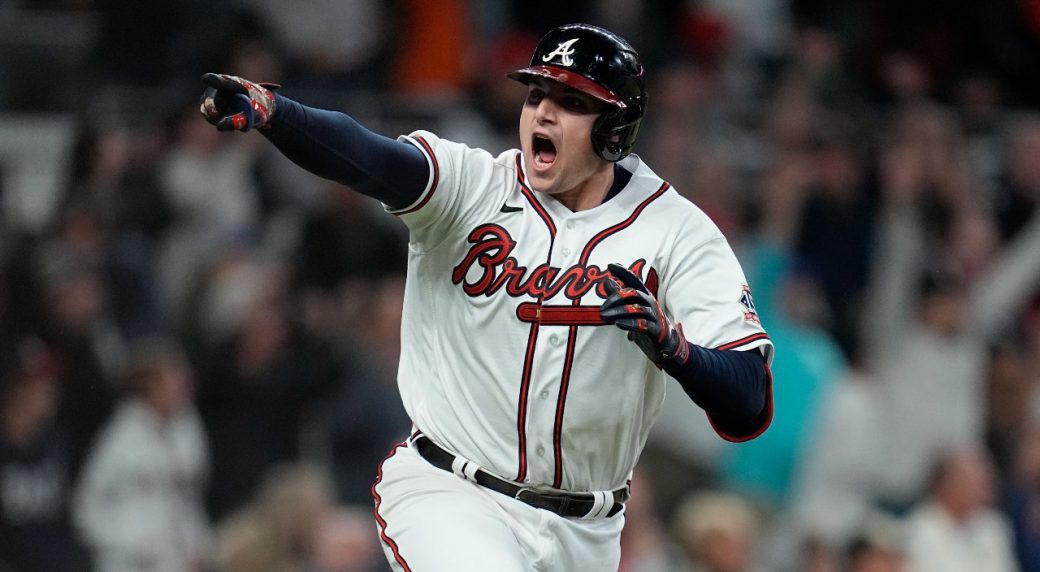 We generally focus on the Orioles around here, as you might expect from a website with the name Baltimore in it, but the end of the season is approaching there’s a lot of interesting stuff going on around baseball worthy of discussion. Some of it has to do with the Orioles too, so we won’t forget about them entirely.

The contracts website Cots Contracts doesn’t go far enough out to keep track of all the Braves extensions, but in 2027, five years from now, Atlanta will still have all those same players under contract.

The wisdom of all these deals is pretty simple. Only Matt Olson, who was 28 when he signed, was above age 25 when signing the deal. The Braves are buying seasons for what they consider to be above average players between the ages of 25 and 35. Those, generally speaking, are the seasons you want. The oldest any player will be when the Braves have to pay them is 35, so they’re not doing the typical thing of eating late 30s seasons because they want the mid-20s seasons. Instead, they’re getting the early 20s seasons and they’re doing it all at a discount on what those players would make were they on the free agent market.

There is absolutely some risk here for Atlanta. If one of these players fails to perform up to expectations, the team will be on the hook for a good amount of money and for a lot of seasons. While most bad contracts, even the ones we joke about being un-tradable, are moveable in the right situation, that’s typically when there are only a few seasons remaining. If Olson goes downhill, or Harris doesn’t continue playing well, or whatever, the Braves are going to be stuck with those players and the financial obligations that come with them for a long time.

That all said, this is absolutely a model the Orioles need to explore right now, starting with Adley Rutschmann. There will be many more opportunities as players come up. Teams that lock up young, good players longterm and both get to keep them and avoid paying them free agent prices are going to extend their competition window.

Aaron Judge is Going to Make Someone Pay

Aaron Judge is unreal. The Yankees outfielder very publicly turned down a contract offer from the Yankees for seven years and $213 million this past off-season. At the time it looked like an offer he should’ve accepted.

Consider that in his career Judge has struggled with injuries, averaging 129 games played per season (if you exclude both his first season of 2016 and the 2020 season which was shortened by Covid). He’s been fantastic when on the field though, posting a very good OPS+ of 150 prior to 2022.

This season his OPS+ is 199. He leads the majors in batters WAR and wRC+. He’s a good defensive right fielder who didn’t look out of place when the Yankees were forced to put him in center field for a bit.

And yet, it’s going to be difficult for the Yankees to give Judge the deal he wants. I mean, sure, they could just do it. But Judge will be 31 next season. Any long term deal is going to take him into his late 30s and likely very close to 40. This is the opposite of kind of long term deal that the Braves have been handing out.

An older player with a history of injuries having a career year? That’s the exact opposite of the kind of player you want to give a big money deal to.

And yet… how can the Yankees *not* sign Judge? It’s an impossible situation in which there’s really no right answer. The smart thing to do from a dollars-per-win model is probably not to re-sign him, but this is the Yankees. They don’t have to be smart. They just have to be good.

Thanks to Judge’s incredible season though, they’re going to pay out the nose for it.

Are The Yankees That Good?

Every team hits a skid now and again, but Judge’s New York Yankees have been in a skid since  early July. After beating Boston twice in a row on July 7th and 8th, the Yankees have gone 12-23. Their divisional lead has been cut by a third and they’ve lost the top spot in the AL to Houston.

In the last 30 days their pitchers have a 4.11 ERA, and rank 18th in baseball. Their hitters are six percent above league average, which his still good, in that same stretch, but it’s hardly outstanding and consistent with the way people were talking about the 2022 Yankees.

Part of the lack of offense is the injury to Giancarlo Stanton, but the rest is probably just a downturn in the season, a low point, an off bit. This Yankees team was never an all time great team. They weren’t the ones to post a .750 winning percentage, so this was probably inevitable. But that doesn’t mean they’re not good enough to win the World Series.

Sadly for fans of just about every other team, they still are, even after a bad month.

It’s always strange when a team makes a bunch of all-in type moves and then decides shortly thereafter to make changes to management, but that’s where the Texas Rangers are. Last off-season they added Jon Gray on a four year deal, Marcus Semien on a seven year deal, and Corey Seager on a 10 year deal. In total, they handed out over 20 years and $550 million in contracts and at the moment they find themselves at 53-65.

So, after granting GM Jon Daniels the authority to spend that kind of money, take that kind of chance, and make that significant long-term impact on the organization, they fired him six months later. They also fired their manager. Because sure, why not?

Daniels had been in Texas a long time and not with a ton of success. He was probably past his due date there and the organization was definitely ready for some new direction. So why then did they let Daniels open up the purse strings and drop half a billion on new contracts?

Oddly, none of the contracts look like disasters at the moment. The problem hasn’t been Seager, Semien, or Gray, but the rest of the Rangers roster.

Hey, at least the new GM will have something to build around, right?

Despite trading Trey Mancini and Jorge Lopez, the Orioles find themselves 2.5 games out of a Wild Card spot and with only the Minnesota Twins between them and the current Wild Card holders, Toronto and Tampa. Yes, both Sox are just behind Baltimore, but both seem to be having more than enough trouble just keeping their heads above water, so neither seems to pose an immediate threat at the moment (though the Red Sox will be in Baltimore for three games starting today, so maybe someone will wake them up).

The point is, we’re talk about shocking the world here. The Orioles making the playoffs would be one of the least expected outcomes of any baseball team in any season ever. The Orioles began the 2022 season with playoff odds of zero percent. That’s how they started the year! Nobody outside the 410 area code gave the Orioles so much as a 1-in-1,000 shot.

And yet here they are, in shouting distance, with the ability to make everyone everywhere eat all their words, including their own front office who supported them so much they dealt away the face of the franchise and the team’s best relief pitcher!

It’s going to be an exciting final month and a half of baseball, and it could be something we haven’t seen in Baltimore for a very long time and something we’ve never seen anywhere else.