MLB playoffs: On to the LDS 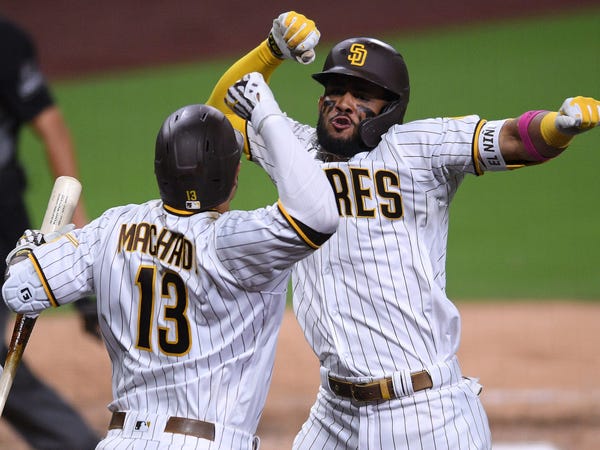 Well we survived the first round of the MLB playoffs. At least I think we did. Hello? Everybody OK out there? Any of you have playoff fatigue yet? No? Good. On we go!

The first round had its wrinkles – and naturally most of my predictions were wrong. I’m just going to chalk it up to small sample size. I’ve talked about my distaste for best-of-3 series with the fellas over at The Warehouse, and I will continue to do so if anyone cares to ask. I also take comfort in knowing that in a best-of-infinity series, I would have been right eventually. Maybe.

Anyway, enough of that nonsense. Let’s look at some interesting things to know about the LDS.

While it kind of stunk that baseball pretended not to exist over the weekend, it did serve a purpose in allowing the remaining teams to shuffle off to their neutral sites for the next round. The Dodgers and Padres will meet in Arlington, Texas, and the Braves will take on the Marlins in Houston. Meanwhile, it’ll be Rays-Yankees in San Diego and A’s-Astros at Dodger Stadium.

The best thing? Once they get started, there will be no off-days, with the two ALDS starting Monday, the NL following on Tuesday. That means potentially four games per day, Tuesday through Friday. How cool is that? At the latest, the round will wrap up with two NL Game 5s on Saturday.

For the teams that move on, the NLCS will be in Arlington starting Oct. 12, the ALCS in San Diego beginning Oct. 11. The World Series is scheduled for Arlington, Oct. 20-28.

We have some interesting matchups in the LDS, beginning with Houston vs. Oakland. A’s starter Mike Fiers was the guy who spilled the goods on the Astros cheating scandal, and while Oakland manager Bob Melvin claims it was a coincidence that Fiers just happened to miss the Astros every time they met in the regular season, there is a chance he will pitch this round. The thing is, Fiers has not been good. So if he does pitch, it’ll probably be later in the series.

Meanwhile, you have to love Carlos Correa somehow turning he and his teammates into victims in this whole thing, as well as his supremely logical take that beating the Twins twice somehow absolves them of everything.

I really didn’t think these two teams would still be around at this point, but here we are. I guess the AL Central wasn’t that good after all.

The other AL series features the Yankees and the Rays, two AL East rivals that weren’t terribly fond of each other this season. On Sept. 1, Aroldis Chapman threw a 101-mph pitch near the head of Tampa Bay’s Mike Brosseau, leading to the infamous quote in which Rays manager Kevin Cash said ominously: “I’ve got a whole damn stable full of guys that throw 98 miles an hour.”

Perhaps more important than the machismo, the Rays absolutely dominated the Yankees during the regular season, going 8-2 and outscoring them 47-34. That doesn’t mean the same thing will happen in this series, not with the Yankees’ bats coming to life while scoring 22 runs against Cleveland in the first round. But you have to think the Rays’ pitching depth gives them an edge in a best-of-five series with no off days — and the Yankees only having one Gerrit Cole.

I said the Marlins “could” win their first-round series and they did. I consider this close enough to being a correct prediction. If you disagree you can take it up with our complaints department.

Anyway, one thing about Miami is that they have some good pitching, with young starters like Sandy Alcantara and Sixto Sanchez, and a very nice and solid veteran bullpen. They’ll take on the Braves, who received some amazing pitching themselves in tossing 22 scoreless innings against the Reds.

The Braves don’t appear to have the pitching depth to last in an extended series, but they are facing a lineup of guys you’ve never heard of, and they do have Freddie Freeman and a great lineup of hitters. The Marlins “could” win this series, too. But I don’t think they will.

THE WEST IS BEST

I’m so glad we got Padres vs. Dodgers for this round. Not because I have anything against the Cardinals. They’re a fine bunch of players with a fine manager who always seem to play at their maximum potential.

But this is the series you show if you want to attract potential young baseball fans to the sport.

On the one hand, you’ve got the Dodgers, who have been MLB’s best team all year. They’ve got well-known stars like Clayton Kershaw, engaging personalities like Mookie Betts (worth every penny, Red Sox), Cody Bellinger and Kikè Hernandez, and a young flame-thrower named Brusdar Graterol who could be the closer-in-waiting.

On the other hand, you’ve got the Padres, the exciting newcomers who mash homers with such infectious joy, not to mention a complete lack of fear, that they actually make the game … you know … fun.

The big question here is the Padres’ pitching staff, which not only became a patchwork affair after injuries kept Mike Clevinger and Dinelson Lamet out of the first round, but which was worked over pretty hard in the three-game victory over the Cardinals.

Clevinger and Lamet have played catch, but it’s uncertain whether either will be able to play vs. the Dodgers. That will make it tough for San Diego to advance.