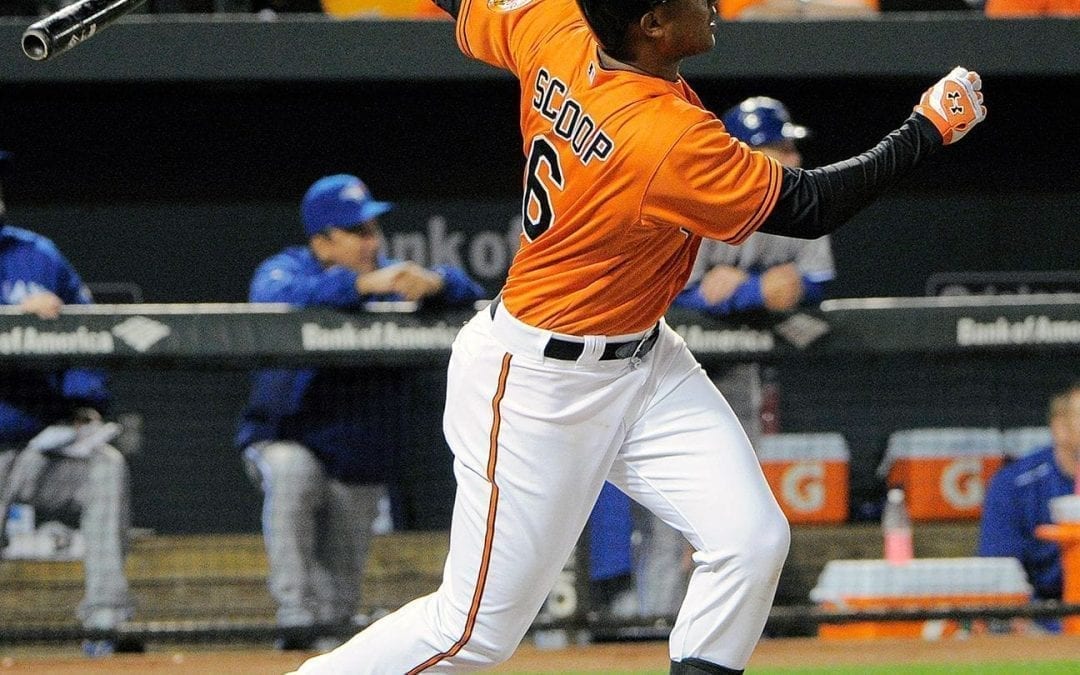 A fast start in the Grapefruit League (.349 AVG, .953 OPS) is only fanning the flames of excitement on Jonathan Schoop for 2016. He popped 16 homers in 481 plate appearances back in 2014 and bested that pace last year with 15 in 321 plate appearances. Who knows what he might’ve done if Pablo Sandoval hadn’t taken him out on a slide and cost him two-plus months of time?! But thankfully he finished the season on the field, smashing bombs. He hit 12 of his homers after returning and had a 26 HR pace over a full season. With all the buzz – especially in fantasy baseball circles – it’s worth wondering what a breakout season might look like from the 24-year old second baseman.

We’ll look at four different facets of his offensive profile:

Schoop is a career .238 hitter in the majors over 774 at-bats (814 PA). His biggest sample (the 455 AB in 2014) delivered a vomit-inducing .209 average which has severely weighed down the average. Last year he was at .279 in 305 at-bats. His batting average on balls in play (BABIP) underscores the sharp disparity in the two batting averages.

In 2014 he was at .249 – well below the .299 league average (even looking at just 2B, it’s .292) – which looks unlucky even in light of his plate discipline considering how hard he hits the ball. But if we’re going to give him something of a pass for 2014, we have to acknowledge that his .329 BABIP from last year was high even considering that he hit the ball even harder in ’15.

It’s tough to rely on him for a positive batting average given his plate approach to date (more on that in a bit), but he was solid throughout the minors (.268; routinely young for his level, too). And again, when you smash the ball like he does (which we also get deeper into here in a moment), you can out-run some of the other factors and simply slug your way to a good batting average. Chris Davis is hardly anything like a 1:1 comp for Schoop thanks to 4x the walk rate, but his strikeout rate (career 31%) can leave him susceptible to a bad batting average in a given year, but he regularly hammers his way to useful average, topping .260 in four of his last five seasons.

A breakout season from Schoop likely don’t go much beyond last year’s .279, but doing it over a full season should be considered growth. The high-end batting average I can see for him is probably about .295 which isn’t that big of a difference from what he did in 2015. His full-season pace would’ve yielded 161 hits in 575 at-bats. A .295 average in the same allotment of time is 170 hits. But again, it’s a whole lot different to do even a .260 for a full season than it is to do .279 for half a season so while it might feel like modest gains for this hypothetical breakout season, it would actually entail a sharp improvement.

This is where folks begin salivating because we don’t really have to dream on his power. We’ve seen it. We haven’t seen a full year yet, but we’ve seen it in sustained runs and it’s evident that the power facet of his game is the most developed of his hitting profile. Even in a mostly ugly 2014 he popped 16 HR in 481 PA – a 20+ HR full season pace (assuming 650 or so PA). His .145 ISO from ’14 doesn’t jump off the page, but it was still well above the .113 league average for second basemen.

His 35% Hard contact rate in ’15 was six percentage points above the league average and nearly 10 above the 2B league average. He also charted well on batted ball distance, coming in eighth behind power luminaries like: Nelson Cruz, Jose Abreu, Kyle Schwarber, Paul Goldschmidt, Pedro Alvarez, Chris Davis, and Giancarlo Stanton. Even in ’14, he slotted 47th which is still pretty good, especially considering that it wasn’t a great year all told (just a 64 wRC+, where 100 is average). It’s easier said than done, but if Schoop has the breakout that I and many others believe he can have, then it likely entails a full season of his 2015 work, so a .200+ ISO and approaching 30 homers.

Schoop has 23 career walks; Joey Votto had 23 or more walks in each of the final four months last season (23, 26, 38, and 28 Jun-Sept). Meanwhile, he has 203 strikeouts in his 817 PA, more than Buster Posey has in his last three seasons combined (191 in 1823 PA). Now those are two of the best players in the game so I’m not saying Schoop has to be like them, just using them to highlight his less-than-stellar marks in those categories so far. However, there is reason for hope.

He didn’t have such a free-swinging, no-walk approach in the minors and given he’s just 24 years old, he should start moving closer to that approach as he matures in the majors. He had 2017 plate appearances coming up through the minors posting a 16% strikeout rate and 8% walk rate, both fantastic marks. A lot of times the minor league rates don’t fully transfer, but Schoop has definitely been an outlier to be so far from his MiLB rates with his 25% strikeout and 3% walk rates in 817 MLB plate appearances.

The tradeoff of course has been the power. He is selling out for it as a major leaguer resulting in tons of swings and misses. While he never had a .200+ ISO in the minors, Schoop still maintained respectable K and BB rates in his two power-spike seasons. Neither is standout, but the 18%/6% combo he had in 2013 when he posted his career-best (to that point) .182 ISO would be sharp improvements on what we’ve seen in the bigs. Even pushing toward those marks would leave him less BABIP-reliant and shouldn’t force him to sacrifice much or even any of the power we’ve seen from him.

One area where he could really improve is when he gets behind in the count. Granted, that’s a big area of opportunity for tons of hitters – young and old. The league only has a .535 OPS when the pitcher is ahead, but Schoop ranks just 211th out of 269 batters (min. 400 PA) with a .473 OPS and his 43% strikeout rate is well above the 34% average. His .136 ISO beats the average (.106), but if he can cut down the strikeouts when behind, that can help stabilize his batting average and be another key factor in making him less BABIP-reliant.

Expecting him to reach his minor levels all in one fell swoop is wildly unrealistic, but even something like a 5-6% walk rate and 21-22% strikeout rate would be a substantial jump forward and put him well on his way toward becoming at least league average in both categories (8%/20%). If he does have the dream breakout season this year, my guess is that the strikeout rate would show bigger improvements than the walk rate. So maybe a stretch goal is an 18-19% strikeout rate, though still just a 4-5% walk rate. With the way he smashes the ball, increased contact is more important than more walks.

Stealing bases has never been a huge component of Schoop’s game so I don’t have any lofty expectations for him there even in a breakout season. His career high was 12 SBs back in 2011 and that came on 19 attempts for a paltry 63% success rate. A full season where he’s just clicking on all cylinders probably yields 5-6 SBs, nothing special.

Adding it all up, the dream breakout season for Schoop might look a little something like: .285 AVG, 30 HR, 85 R, 95 RBIs, and 5 SBs. There have only been five such second base seasons in the last decade so it’s definitely lofty, but if Dan Uggla and Aaron Hill can do it, so can Schoop. The other three to reach those heights are a lot less surprising: Robinson Cano, Chase Utley, and Brandon Phillips.

For comparison’s sake, I looked at Schoop’s 90th percentile projection at Baseball Prospectus: .282-25-68-77-3. So I’m not too far off when you consider that “dream breakout” is more of a 99th percentile kind of season. The biggest differences are the R/RBI totals which I understand since Schoop has always batted low in the order, but if he has the kind of season we’re talking about here, then he will likely move up the batting order at some point in the season, which will add to those counting stats.

Paul Sporer is currently a contributor to FanGraphs / RotoGraphs. He has worked for/still works for Rotowire, Baseball Prospectus, Rotogrinders, The Fantasy Fix, Draft Day, and PaintTheBlack.com – his own website centered around pitching. Additionally, he’s written for several Baseball Prospectus Annuals, contributed to Rotowire’s 2015 magazine, and spoken at a couple of BaseballHQ First Pitch Arizona events. His popular starting pitching guide is available at paulsporer.com.