What Is Too Much For Chris Davis? 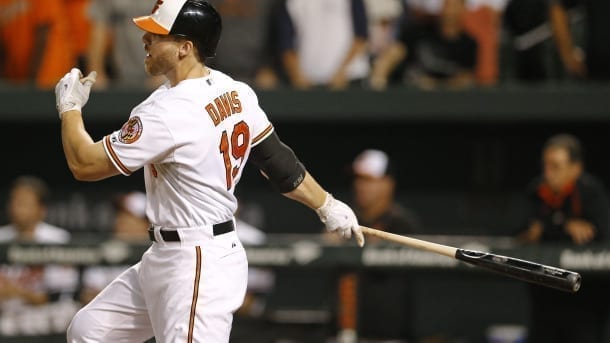 The news (as reported by Ken Rosenthal / FOX Sports) earlier today was that the Baltimore Orioles have offered Chris Davis a contract possibly as high as 7 years, $168M.

(EDIT: The latest news per ESPN’s Buster Olney is that the O’s have pulled their offer to Davis. That they would negotiate further if Scott Boras and Davis come back to the O’s with a counter, but that Baltimore is currently turning their attention to starting pitching and Justin Upton.)

At our message board, that has led to a new round of discussion about what constitutes too much for the slugger.  (You can discuss this further at the BSL Board here.)

I guess we all have our own individual standards.

The issue for me, is not the Annual Average Value ($25M) of that sought deal, but the 8th year. Ideally to me, you would be able to sign him to a 5 or 6 year contract.

That’s not going to get it done. In my opinion, the final contract becomes 7 years, $175M.

What do you think, is this too much?

Would you be excited about having Davis back, but worry about how that deal will impact the Orioles in years ahead?

Do you think the Orioles would be better off turning away from Davis, and setting their sites on Justin Upton, or Alex Gordon?

Let’s discuss all of this further here.

As we illustrated yesterday, if the Orioles sign Davis or Upton or Gordon to a contract with an AAV of $21M, and then added a starting pitcher at $10M and above; the Orioles would be looking at a 2016 team salary of approximately $150M.  That would represent a $30M +/- increase over 2015 spending.

It seems reasonable to believe that the O’s total payroll will only increase over the horizon of the 7 years we are talking about with Davis here. Thus the percentage of total team salary tied to Davis only figures to decrease during the length of the contract.

Only if Davis provides equal or greater value back during the duration of his contract.

Davis’ DOB is 3/17/86, meaning he will be entering his 30s to begin his new deal. So, he’s signing a deal several years past the established prime years for any player.

You can’t pay for what he (or any player) has done prior. You have to pay based on what you expect the player to provide going forward.

By many aspects, Davis is the definition of the Three Outcome Player (Walk, K, Homer). Those players have traditionally not aged well.

Is there reason to think Davis should be different?

It’s my perception (perhaps an inaccurate one?) that most TTO players are traditionally lumbering 1st base / DH types, who are relatively poor athletes.

If he struggles with contact like he did during 2014 and into the beginning of 2015; him having some decent wheels for a big man, and being solid defensively is not going to matter. If he’s at his 2012 levels offensively though, having a more well rounded game than other TTO sluggers could make him more valuable in comparison.

Still, when the question is what will Davis provide going forward, the answer will clearly remain primarily tied to his bat.

What should we expect him to provide offensively from the start of next Spring through the 2022 season?

Is it possible that Davis could collapse, and that this deal could go South quick? Sure it could.

My expectation though is that Davis will provide equal or greater value to a $175M deal during the length of the contract.

Going into the 2014 season, FanGraphs had calculated the cost of a win at $6M.  I’ll go with the idea that during the duration of Davis’ contract (again, using 7 years $175M as our projection); that the average cost of a win will be $8M.

During the last three years, Davis’ average fWAR is 4.46.

If that occurred, Davis would have provided equal or better value for the 7 year deal, in the first 5 years alone. Meaning anything he provided in years 6, and 7 would be a bonus.

Maybe you don’t agree with Davis providing an average of 4.46 fWAR over the next 5 years. Let’s say he does that for the next 3 seasons, and regresses 10% annually there after.

Overall, what I’m illustrating is that I feel pretty good about Davis providing equal or greater value to a 7 year $175M deal.

The next question would become, is this the best allocation of salary the O’s could choose?

The answer to that is probably not.

I had been scared off by Heyward due to the headlines I had read about a degenerative back condition. As pointed out by BSL poster Mike Weber, it appears that Heyward’s condition is not exactly degenerative.

If someone wants to make the case for the O’s going all in on Heyward, I can see that. He’s at the ideal age, he’s a superior athlete. He’s a tremendous defensive talent, and base runner. There is upside with his bat (that would probably play very well at OPACY).

I don’t see the O’s going down that path though, and I’m still not confident that Heyward would ever pass an Orioles physical.

So if the O’s do not reach an agreement with Davis, it currently seems likely that their attention will turn fully to Justin Upton, or Alex Gordon.

I’m not going to fully revisit the arguments for and against Upton and Gordon here. (Discussed just yesterday here.)

What I will say is that if the O’s decide they are comfortable going to $25M annually for Davis, I don’t think that contract should be trashed, while the prospective deals for Upton (7 years $150M), and Gordon (5 years, $105M) lauded for being vastly superior values.

Yes, there is a major difference overall between Gordon getting $105M over 5 years, vs. Davis getting another 2 years, and another $70M.  Annually though, it’s $21M vs. $25M for those first 5 years. That’s not huge savings. That’s a veteran middle reliever.

Same thing with Upton, except there you wouldn’t even be saving in total years.

What has Upton done over the past 4 years to show he’s a better player than Davis?

Is he a better athlete?  I think many would say yes, but again – Davis isn’t some lumbering slugger.

It’s not like the metrics show Upton to be a great fielder.

Upton should give consistent production, and there is certainly a good chance for him to again have an elite season or two like he last did in 2011.

If you have a $150M salary, you can easily afford to pay Davis / Upton / Gordon  $21-$25M annually. Also, if the O’s jump their 2016 salary $30M over 2015, it seems safe to assume the overall team salary will only increase during the length of the contract they give out.

There are limits to everything, and everyone has different limits they are comfortable with.