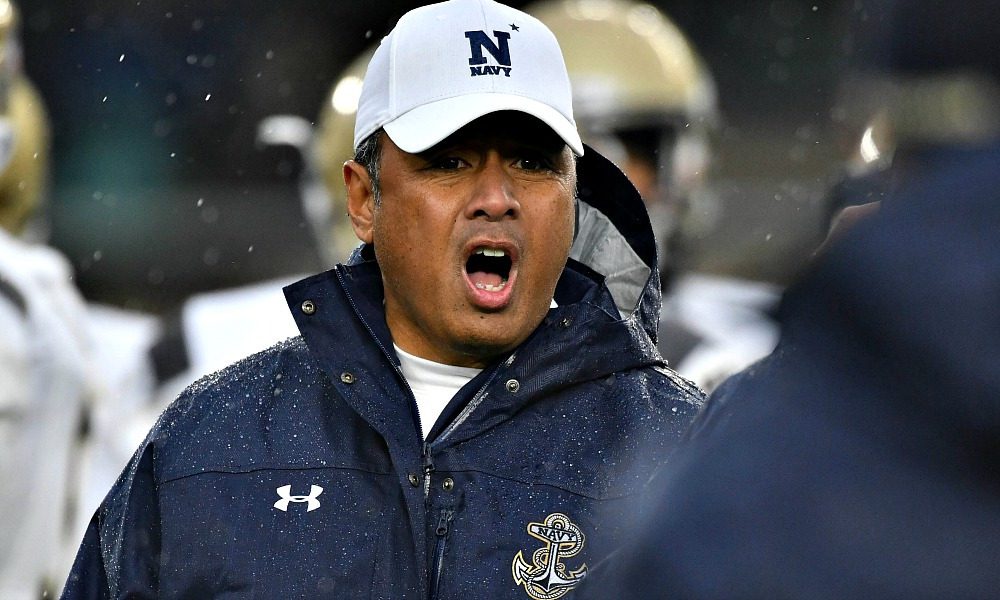 Coming off of an embarrassing Week 1 performance against the Marshall Thundering Herd, one would call Navy’s 41-7 loss a “humbling experience.”

This is their second straight loss in the season opener and this new look Midshipmen squad is already showing signs that this may be a tough season up ahead. Nonetheless, now Navy looks ahead to Week 2 as they face off with rival Air Force in hopes of winning bragging rights and taking back the Commander-In-Chief trophy.

In this article we will take a look at the good, the bad and the ugly for the Midshipmen coming off their tough Week 1 loss. We will also look ahead and preview their rivalry game against Air Force as they hope to bounce back in a major way.

If there is one thing that the Navy Midshipmen know how to do, it is run the football. Despite being completely outplayed by Marshall in the passing game (363 passing yards to Navy’s 61), Navy returned the favor on the ground.

The Midshipmen dominated time of possession as they had the ball for nearly 42 minutes on 92 plays to the tune of 337 rushing yards. In the backfield Navy had four players get double-digit rushing attempts and six players rushed for 20+ yards.

Headlining the rushing attack for the Midshipmen were senior fullback James Harris II and sophomore quarterback Xavier Arline. These two combined for 156 yards on 27 carries and senior fullback Isaac Ruoss also chipped in with 63 yards of his own on 15 carries. This should not come as a surprise though as Navy has always had a dynamic run game.

Even back in 2019 when Navy had one the most talented dual threat quarterbacks in program history in Malcolm Perry, they were still a run first team. When Perry was named AAC Offensive Player of the Year, he had only thrown for just over 1,000 yards on the season. He was more known for his ability on the ground as he recorded 2017 rushing yards for 21 touchdowns.

So again, the Midshipmen will always have a prolific running game. Unfortunately for them, in Week 1 it only took the Thundering Herd 19 minutes to put up points in a hurry and made the game uncompetitive by the start of the second half.

If Navy is going to continue relying on this “slow and steady” formula with heavy doses of the run game, they have to be able to limit their opponents’ big plays. The Midshipmen clearly do not have the kind of offense that can afford to get into a shootout which puts more pressure on the defense to get stops and keep games close.

Navy Just Could Not Punch It In

If you were to only take a look at the box score stats, all signs point to Navy having the perfect recipe for a Week 1 victory.

They out rushed Marshall by over 200 yards. They ran 29 more plays and had the ball longer than the Thunder Herd by double the time. They even only had four penalties for 22 yard to Marshall’s five penalties for 47 yards.

But in this case the box score stats are as misleading as it gets. Navy head coach Ken Niumatalolo made it very clear postgame that it was indeed his team that was actually outplayed despite what the numbers may tell you.

“We got our butts whoops in all facets – coaching, offensively, defensively and special teams. No excuses,” coach Niumatalolo said. “We were prepared. We didn’t look like we were prepared, having penalties to start drives and inexplicable things happening. Delay of game on the punt. Kicks blocked. It is the worst that we have been on special teams in a long time. We got our butts whooped.”

One of the biggest things that hurt Navy in this game aside from the blocked kicks that flipped field position was their inability to finish drives. Despite controlling the ball for most of the game, the Midshipmen entered the red zone five times and only finished one drive with points.

In opposition, Marshall’s freshman quarterback Rasheen Ali led the charge in his first collegiate start as he led the Thundering Herd into the red zone six times and scored touchdowns on all six trips. This was easily the defining factor in this game as Navy left up to 28 points on the board which could have potentially swung the outcome of the game.

“You have to finish drives. A team like that is so potent on offense. We have to be able to finish those drives to stay close to them,” said Niumatalolo. “When you don’t finish those drives, that is hard. I feel like we moved the ball, but it doesn’t matter if you are not finishing and scoring. We killed ourselves and killed ourselves in the red zone. Against a team like that who is so potent on offense, that can’t happen.”

Can the Midshipmen convert long drives into points? It really is that simple. As an offense in Week 1 that proved that they could move the ball and put together long drives, their only real flaw is leaving points on the board.

If this team can finish out drives, they will be a tough out every week as teams will be forced to play up-tempo and desperate to make up the time of possession deficit that Navy’s offense creates. The Midshipmen have the talent to do so, but they have to show that they are capable of executing and getting the job done on the field.

In what has been a long-time rivalry spanning back to the early 1960s, the smash mouth style of the Navy vs. Air Force game has become a staple of what college football is all about.

In this series Navy is at somewhat of a significant deficit with a record of 22-31 against the Falcons. They also are coming off of a loss in the rivalry series. The last time Navy faced Air Force it was back on October 3, 2020, in which Air Force went on to win 40-7.

The Midshipmen were held to only 97 yards rushing for the game. They were held scoreless in all but the second quarter where slot back Tyger Goslin filling in for quarterback Dalen Morris (out due to illness) connected with Myles Fells for a 73-yard touchdown. Surely a tough day for Navy fans and a game that coach Niumatalolo and the Midshipmen would like to put behind them.

Interestingly enough when looking at this series over the last couple of years, a notable pattern has occurred in the games between these two teams. Dating back to 2013, the Midshipmen have won every other matchup year after year. Navy is an even 4-4 in the last 8 years and if the pattern holds up, then Navy should feel good heading into this game as they are due for a W in this rivalry series.

Air Force is coming off of a 35-14 victory against Lafayette in which they had two 100+ yard rushers in Brad Roberts and Micah Davis. Roberts acting as the bruiser out the backfield took a large amount of the carries with a team-high 25 carries for 111 yards. Then there is Davis who is more of the home run hitter in the wide receiver spot who had 101 yards on the ground along with two touchdowns on only four carries.

Air Force also got solid play at quarterback from junior QB Haaziq Daniels who threw for 50 yards and rushed for 72 yards and 3 touchdowns on 19 rushing attempts.  This will easily be a game of clock management and a war in the trenches as the team who puts the most pressure on the opposing team’s running game will come out victorious in this one.