NFC Stories Heading Into The Draft 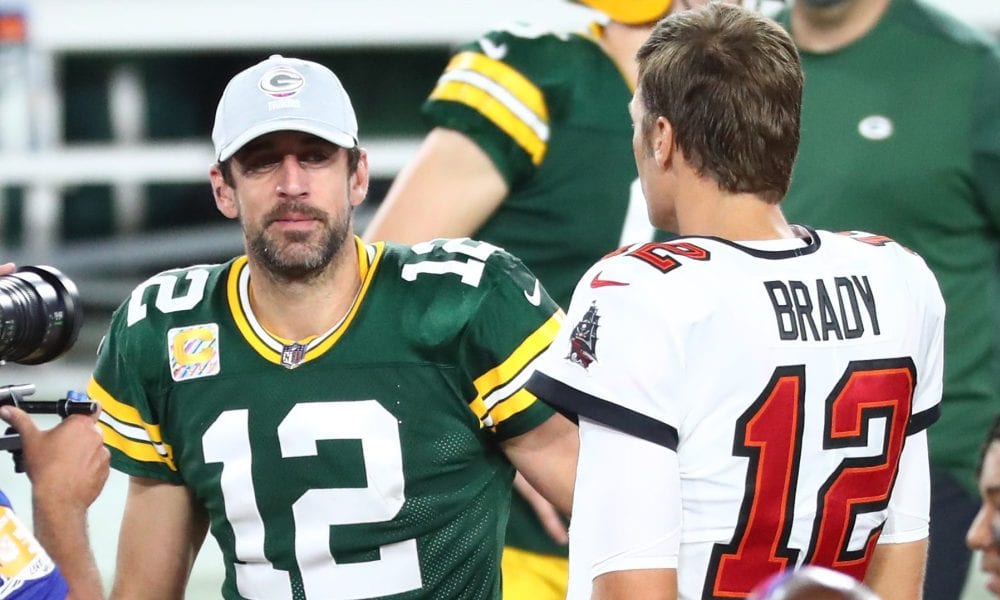 Where did the time go?

Seemed like it was just last week when Tom Brady bored the football world once again by winning his seventh Super Bowl ring. And look at where we are now. Less than a week from the NFL Draft. And things have changed somewhat since early February.

So, let’s take a look at some lingering offseason storylines, NFC style.

Will the Packers and Aaron Rodgers continue their cold war?

So, what’s the problem in Green Bay? It’s hard to say. Apparently Mr. Rodgers wants the organization to make a long-term commitment to him, but the front office hasn’t responded. In fact, they’ve gone so far as to say Rodgers’ big contract prevents them from landing quality free agents. And then Rodgers went on “Jeopardy!” for a two-week run as a guest host and suddenly rumors were flying that Aaron is angling for a full-time job on the legendary game show.

The level of passive-aggression here is so thick I want to spread it on toast and eat it. If the Packers really want to up the pettiness, they should draft another quarterback next week. That way they can antagonize Rodgers and his backup Jordan Love.

Everyone needs to calm down. Rodgers is coming off an MVP season that ended in the NFC Championship Game. The Packers would be foolish to cut him loose right now. Then again, Tom Brady left New England, so anything is possible.

Getting the band back together in Tampa

Speaking of Tom Brady, here’s another thing that is just annoying. The Buccaneers have had an excellent offseason as they were able to keep all of their big pieces that could have left in free agency.

Their three big defensive priorities? No worries, DT Ndamukong Suh, LB Lavonte David and LB Shaq Barrett all signed new deals. On Brady’s side of the ball, Rob Gronkowski and Leonard Fournette are staying put and Chris Godwin got the franchise tag. Even Tampa’s special teams are secure as kicker Ryan Succop signed a three-year contract.

So can we pencil in the Bucs for another Super Bowl appearance? Barring injuries, there’s no reason to doubt they’ll be there come February. Ugh.

The Cardinals had some bad luck to end the 2020 season as an injury visibly affected Kyler Murray’s progress and the team missed out on the postseason. Something lit a fire under Arizona’s front office because, wow, they got after it.

It started with the signing of JJ Watt, which would have been enough to keep most teams satisfied. But they weren’t done. They added receiver A.J. Green and cornerback Malcolm Butler via free agency and traded for center Rodney Hudson and guard Brian Winters. They did lose star corner Patrick Peterson, but the team’s willingness to part with him tells me they don’t have much faith in what’s left in his tank.

Here comes the hard part. For head coach Kliff Kingsbury, the pressure is on him to put all these new parts together and at least reach the postseason. If the Cardinals fall short, expect management to part ways with Kingsbury and find another option.

It was encouraging to see Dak Prescott back on his feet and working out. There’s no reason to doubt that he’ll be under center in Week 1. However, the reason the Cowboys finished 6-10 last season wasn’t all because they lost their quarterback to a devastating injury.

The defense in Dallas was a disaster in 2020. They tried to address some gaping holes by adding safety Keanu Neal, cornerback Jourdan Lewis and defensive linemen Brent Urban, Tarell Basham and Carlos Watkins in free agency. All of them have solid resumes, but it’s hard to argue that any of them are game changers.

That leaves us with the draft. Here’s hoping Jerry Jones and his son Stephen have some defensive talent earmarked, because they need all the help they can get.

Uhh, what is going on here?

The Bears got sick of Mitch Trubisky, so they did the smart thing by signing Andy Dalton. Yes, that’s right. They signed Andy Dalton.

Let’s just move on, shall we?

Jimmy G might be doneski in the Bay Area

Just like the Rams tired of Jared Goff and sent him away, it seems the 49ers are doing the same with Jimmy Garoppolo. Remember, he was in the Super Bowl less than two years ago, but Kyle Shanahan is seemingly washing his hands of him.

San Francisco traded up to get the No. 3 pick in the draft and the scuttlebutt from the draftniks has the team taking Alabama QB Mac Jones at that spot. That seems like a fine decision, but there’s one problem: Jimmy G is still on the team. So they’re either going to keep Garoppolo around so he can play for a few weeks of the season before they ditch him for the rookie, or they’re going to move him after the draft.

Either way, it can’t be fun to be Jimmy right now. There’s nothing worse than being dangled by an employer, even if you are making a nice paycheck.

Numbers game: So, the NFL did a cool thing this week by opening up jersey numbers for players. Soon we’ll be able to see a linebacker or a receiver wear a single-digit number, just like in college. There’s nothing wrong with that, right?

Wrong. Mr. Tom Brady — who has really been grinding my gears this week — has a big problem with it, posting on social media that this will lead to “bad football.” Sigh. Apparently, he feels that linemen won’t know who to block if jersey numbers are all over the place. If I was blocking for Brady, I’d feel pretty insulted. Their quarterback clearly feels his lineman are too stupid to study film and figure which player is wearing which number.

Tom will get over it. He watches so much tape anyway that he’ll quickly figure things out.

Not yet, Baker: The Browns finally did pick up the fifth-year option on Baker Mayfield’s contract, but they haven’t jumped to give him an extension yet. Knowing Mayfield, he will no doubt use that as fuel for the 2021 season. I’m not a betting man, but put some money on him to post some big numbers.

New day in Indy: Things didn’t end well for Carson Wentz in Philadelphia. He got benched in favor of Jalen Hurts and reports were that he became something of a malcontent in the locker room. But those stormy days are behind him. Wentz is with the Colts now and the early notices are positive.

“It’s been good. He’s comfortable in his own skin,” General Manager Chris Ballard said. “He’s got a great sense of humor. He doesn’t take himself too seriously. He’s dialed in. He works.”

He better work. If he messes things up here, you can call it a career.

Sitting this one out: NFL players are choosing en masse to sit out voluntary workouts and they should be applauded for doing so. One of the more irritating facts of NFL life is coaches saying things are voluntary and then throwing shade when players don’t show up. There’s no reason they need to be at the facility to run around in shorts and helmets. They can accomplish everything that needs to get done from home. Why take a chance at someone getting hurt at this part of the calendar? Makes no sense.

Draft predictions: I predict that Commissioner Roger Goodell will announce a name every 10-15 minutes on Thursday night. Then again on Friday and Saturday. We will hear about what every player selected will bring to their new team and how they can provide an instant impact. Fast forward two years and 75 percent of the players drafted will be out of the league. The end.