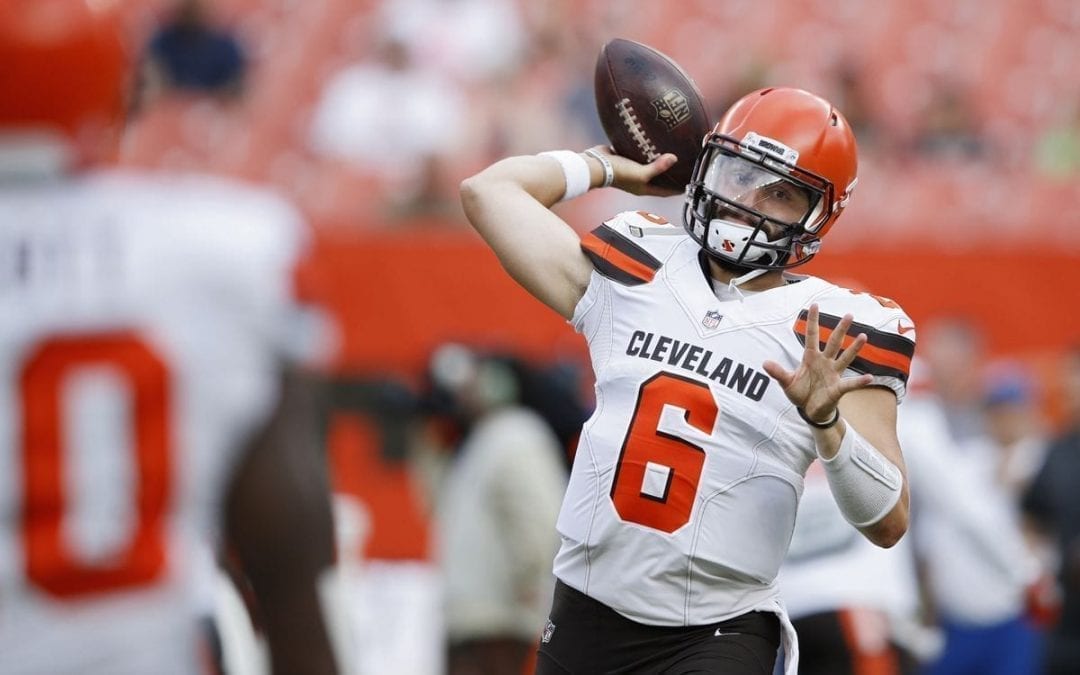 Many men have attempted to guide the Cleveland Browns out of their quarterbacking hell since the franchise returned to the NFL in 1999. All have ultimately failed. I can’t help but think that all of those names, from Tim Couch to Tyrod Taylor, are somewhere with a swelling rage inside their souls.

Because all those poor signal-callers were never given the riches that Baker Mayfield will enjoy this fall.

It’s clear the Browns have found their franchise quarterback in Mayfield and are now doing the right thing by loading their guns, so to speak. They already had wide receiver Jarvis Landry and tight end David Njoku. A burgeoning running back in Nick Chubb sits in the backfield along with Duke Johnson, and just for fun, the team went out and added Kareem Hunt. Their offensive line was already a top-five unit in the NFL when it comes to pass-blocking.

History is littered with the corpses of teams that won the offseason with splashy signings. And this move by the Browns could ultimately go down in flames. It’s no secret that Landry and Beckham are very fond of having the ball thrown to them as often as possible and there’s only one football to go around on each play. There are also a lot of personalities on the offensive side of the ball under the watch of an unproven head coach in Freddie Kitchens.

But why worry about that right now? Remember, this is an organization that went 0-16 in 2017. Fan enthusiasm was moribund, at best. But a season of promising play from Baker Mayfield and a free-agent splash later, things are looking up. Check out some of these reactions on Twitter:

“I can’t put into words how much this means to me.”

“Drop the jersey! Take my money!”

There were also a huge collection of memes and Jonah Hill GIFs to along with the comments. Trust me, people are happy along the Cuyahoga. And that makes me happy. I love it when teams that make a living finishing in last place finally pull themselves out of the muck. And Browns fans are way more loyal than they should be. They deserve to feel good.

And Baker Mayfield, if he fails at this quarterbacking thing, can’t say that the team didn’t do enough to put talent around him.

What the hell happened this week? It’s like the NFL watched last year’s NBA offseason and said “hold my beer.” I, for one, loved it. From Monday on, the deals came at a fast and furious pace. Names switched teams so often, breaking news reporters probably still haven’t slept.

Let’s break down some of the moves I liked.

The Patriots landed the veteran pass-rusher and a seventh-round draft pick in a trade with the Eagles. Now, while Bennett seemed to disappear for long stretches during games last season, Pro Football Focus still lists him as a solid option at the position.

And there’s no better place for him to land. The Patriots will free him up to do what he does best. And I have no doubt that he’ll make big plays in 2019.

Antonio Brown to the Raiders

While some are giving credit to Jon Gruden for landing a solid target for QB Derek Carr, I’m lauding this as as solid move for Pittsburgh. People seem to forget that the Steelers have a knack for knowing when to let wide receivers walk.

Brown is 31-years-old and while he undoubtedly has the potential for at least two more peak seasons, the Steelers are free to get younger at the position. They’ll find someone in the draft. They always do. Meanwhile, they’ve been able to rid themselves of a disruptive force in their locker room.

The safety is coming off three straight Pro Bowl seasons and the Giants decided they didn’t want to use the franchise tag on him, which would have been reportedly worth around $10 million. Huh.

Well, it’s their loss as Washington swooped in and gave Collins a six-year contract worth $84 million with $45 million guaranteed. Did they overpay him? Maybe a little, but that’s OK. What the Redskins are getting is a “set it and forget it” defensive back from a division rival. That’s worth a few extra dollars.

We all knew he was done in Seattle. If his attitude didn’t tip you off, maybe the middle finger he flashed the Seahawks sideline while he was carted off with a knee injury last season sealed it. It’s all good though. People sometimes need a fresh start.

And he got that in Baltimore, to the tune of a four-year, $55 million contract. The Ravens had an opening at safety after Eric Weddle was released and Thomas is a perfect fit. He’s a smart, rugged veteran who can deliver the punishing hits that will most likely make him a fan favorite.

Anthony Barr has a change of heart

The linebacker was all set. The free agent agreed to a contract with the New York Jets and was ready to ride into his future. Then, something happened. A sudden twinge of guilt, perhaps? A heartbreaking one last look at the Vikings locker room?

Whatever it was, Barr decided he just couldn’t quit Minnesota. So, since he agreed to the deal before the actual start of free agency, he backed out. Changed his mind. Went back on his wo … well, that’s too harsh. Instead he decided to accept a five-year, $67.5 million deal with the Vikings that could be worth up to $77.5 million.

That’s a lesson for the kids out there. It’s not always about the money. There’s nothing wrong with staying in a place that makes you happy.

Now, let’s break down some the moves I didn’t care for.

I’m not blasting the Ravens for letting this happen. They pretty much didn’t have a choice with Mosley as their salary cap situation wasn’t good and the linebacker was sure to score a ton of money on the open market. And he did, getting $51 million guaranteed from the Jets. He might not be ‘elite’, but he’s very good, even with oft-mentioned pass-defense issues. He’s also been dependable, and high character. That’s not easy to replace.

And when it comes to Suggs, there’s nothing wrong with allowing the veteran to leave for Arizona. The man has played 16 NFL seasons and at some point, the team had to move on from him. But still, what a bummer. T-Sizzle is on the Mt. Rushmore of great Ravens defensive players and it would have been nice to see him end his career with the team.

Yes, Bell is quite the star. And yet, I feel the Jets would have been better served to also spend big on their putrid offensive line. It helps that they landed guard Kelechi Osemele in a trade with the Raiders, but will his presence be enough?

Who knows, the team might still target some other free-agent linemen and there is still the draft to come, but Le’Veon Bell won’t be able to help much if he’s getting smacked in the backfield.

The Broncos have gone from Peyton Manning to Brock Osweiler to Trevor Siemian to Paxton Lynch to Brock Osweiler again and then Keenum. But Elway wasn’t done. To put the cherry on the top of the incompetence sundae, he traded for Joe Flacco.

I know Elway is a god in Denver and he does deserve credit for being an executive that put together a team that reached two Super Bowls with one victory under his watch, but come on. The gold standard for quarterbacks as a player can’t get a damn thing right as a scout.

This is who Miami was able to reel in during free agency thus far: tight end Dwayne Allen and cornerback Eric Rowe. I don’t know how this franchise still has fans.

And after all their issues at quarterback, are they really going into the 2019 season with Ryan Tannehill? It seems like their options are running out.

Dee Ford to the Bay Area

The 49ers deserve credit for landing the excellent linebacker in a trade with the Chiefs for just a 2020 second-round pick. And they immediately signed him to a five-year, $87.5 million deal.

Wait, Sid, why don’t you like this move? Duh, I’m a Rams fan. And it’s not just the Ford deal that has me worried. The Niners also got their hands on LB Kwon Alexander, versatile RB Tevin Coleman and cornerbacks Jason Verrett and Jimmie Ward.

What are they doing? The Giants signed Odell Beckham Jr. to a big contract last offseason, claimed they had no intentions of trading him and then changed their minds and dealt him to the Browns. OK, that’s fine. Now, they’ve turned around and spent potentially $37.5 million on free agent wide receiver Golden Tate. Now, Tate is a fine player, but … why?

What a relief: Tight end Jesse James spent the first few seasons of his career in Pittsburgh, but he just signed a free-agent deal with the Lions. And while it’s true Detroit isn’t exactly a perennial winner, the man says he’s “glad to get away” from all the drama surrounding the Steelers. Can’t say I blame him. And he doesn’t have to worry about drama with the Lions. Or media attention. Detroit might as well be Mars in in the NFL world.

Russell can’t stop: Seahawks quarterback Russell Wilson is back in the news, as he’s heading to spring training for the Yankees. The man has to scratch that itch every year, I guess. It’s all fun and games until someone takes a line drive to the eye, just saying.

Awkward? The Falcons signed running back Kenjon Barner to a one-year deal. Barner, who played for the Patriots and Panthers last season, is the same man who got leveled by Atlanta punter Matt Bosher on a return. That should make for some interesting locker room chatter.

Chiefs get defensive: Kansas City made two solid moves this week, signing safety Tyrann Mathieu and pass-rusher Alex Okafor. New defensive coordinator Steve Spagnuolo has a big job in front of him, fixing a defense that was at the bottom of the NFL last season. These two pieces will help.

Of course they did: WR Cole Beasley has a new home as the former Cowboy agreed to a four-year deal with the Bills. Good for him. Here’s an interesting nugget: The Patriots were reportedly interested in him and did make an offer. That should come as no surprise to anyone and New England is the Valhalla for white wide receivers.