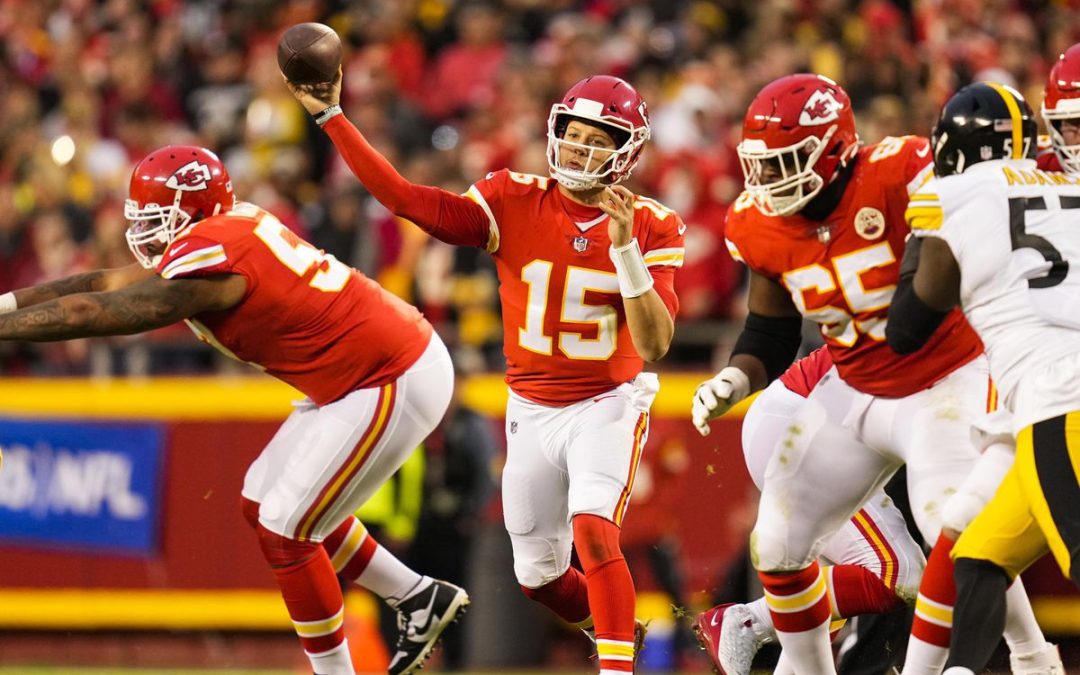 It may be hard to believe, but the 2021 NFL season has just two weeks remaining on the schedule.

What may be even harder to believe is that 24 teams are still in the mix for a playoff spot with two games remaining.

Let’s take a look at the scenario for each team still in playoff contention.

1. Kansas City Chiefs (11-4) Believe it or not, the defending AFC champs are the ONLY team to have secured a postseason berth through Week 16 of NFL action. Well, home field advantage at Arrowhead Stadium might soon follow, as the Chiefs can secure home field advantage with a win over the Bengals and a Titans loss. When you take into consideration that the Chiefs have won 8 consecutive games and straight-up molliwopped the Pittsburgh Steelers without Travis Kelce… The Chiefs look like the frontrunner to win the AFC crown for a third consecutive year.

2. Tennessee Titans (10-5) On one hand, you have to applaud the job Titans Head Coach, Mike Vrabel, is doing with a shorthanded offense. Even without Derrick Henry, the Titans were still able to muster up enough offense with A.J. Brown, who torched the 49ers secondary with a career-high 11 receptions for 145 yards and a score in Thursday’s comeback win. The Titans can clinch the AFC South title with a win against the Dolphins or a Colts loss to the Raiders.

3. Cincinnati Bengals (9-6) If you started Joe Burrow in your fantasy lineup last week, then congrats on the win. As Joe Burrow absolutely dismantled a depleted Ravens secondary on Sunday, throwing for 525 yards and four scores in what felt like a statement win from the Bengals. However, Burrow can’t light up a victory stogie quite yet, because in order to clinch the AFC North this week the Bengals will need to beat the Chiefs and a Steelers loss to the Browns in order to secure the division.

4. Buffalo Bills (9-6) Speaking of statement wins, Josh Allen finally beat the Patriots in a meaningful game for both teams. However, the job isn’t finished quite yet. The Bills hold the tiebreaker over the Patriots but with their records being identical, one misstep versus the Falcons or Jets could open the door for Bill Belichick to retake control of the AFC East.

5. Indianapolis Colts (9-6) Here’s where things begin to get interesting. The Colts are still very much in the mix for the AFC South crown, but also face a Raiders squad that has refused to pack it in this season. Jonathan Taylor is rightly in the MVP conversation and can help the Colts clinch a playoff spot this Sunday with a win against the Raiders.

6. New England Patriots (9-6) Three weeks ago, the Patriots looked to be on their way to re-establishing their dominion over the AFC East. However, after two consecutive losses the Pats now find themselves in need of a win to avoid a late season collapse and missing the playoffs altogether. Mac Jones will have the opportunity to square off against fellow rookie quarterback, Trevor Lawrence, as the Pats can clinch a playoff berth with a win over the Jaguars and Raiders loss or a loss by the Dolphins.

7. Miami Dolphins (8-7) Speaking of the pesky Dolphins, Brian Flores is building quite a case for the NFL Coach of the Year award. Miami has simply pulled off one of the most impressive midseason turnarounds in NFL history. After a 1-7 start, the Dolphins have rattled off 7-straight wins and now find themselves in control of their playoff destiny with two games remaining. However, the Dolphins have one of the toughest remaining schedules in the league. As the Dolphins will have to face off against the Titans and Patriots the final two weeks of the season.

Other AFC Teams Still in Contention

Baltimore Ravens (8-7) The Ravens dropped to 1-2 without Lamar Jackson in the lineup and are losers of four straight. Unfortunately, the task doesn’t get any easier over the next two weeks, with the Ravens needing wins against the Rams and Steelers and potentially some help to nab a playoff spot. The Ravens have overcome a number of significant injuries all season long, but if the Ravens can’t get Lamar Jackson back close to 100% in Week 17, they may finally succumb to the injury bug in 2021.

Los Angeles Chargers (8-7) Of all the hopeful playoff teams last week, perhaps no team suffered a more gut wrenching loss than the Chargers. The Houston Texans, who are playing for absolutely nothing at this point in the season, stunned the Chargers by scoring 41 points at home and picking off Justin Herbert twice to knock the Chargers outside of the playoff picture. The Chargers will have to find some wins against the Broncos or Raiders and some help. Otherwise, the talented Bolts squad may be watching the NFL playoffs from home.

Las Vegas Raiders (8-7) Speaking of the Raiders, this team simply refuses to die in 2021. As the team has won their previous two games by a combined total of six points to stay in the playoff picture. Their remaining schedule of the Colts and Chargers isn’t exactly ideal but the Raiders resiliency in the midst of a tumultuous season means they shouldn’t be counted out quite yet.

Pittsburgh Steelers (7-7-1) Of all the teams still in contention, the Steelers outlook looks the bleakest. Pittsburgh got stomped by the Chiefs, were on the verge of getting blown out by the Vikings and have playoff odds that currently sit around 10%. They will need to win their final two games in order to have an outside shot of making one final postseason run with Ben Roethlisberger under center.

Cleveland Browns (7-8) The Browns loss to the Packers all but sealed their postseason fate. However, if the Browns win their final two games against the Steelers and Bengals, they will have an outside shot of making the postseason for a second straight year.

Denver Broncos (7-8) So you’re telling me there’s a chance? The Broncos need just about everything to go right in order to make the playoffs. Currently, they sit at less than 1%.

1. Green Bay Packers (12-3) Fortune seems to favor the reigning league MVP at the moment. Aaron Rodgers and the Packers are in the driver’s seat for home field advantage in the NFC. They don’t play a team with a winning record over the last two weeks and can clinch the number one seed with a win against the Vikings and a Cowboys loss in Week 17.

2. Dallas Cowboys (11-4) Well, so much for a struggling offense… The Cowboys sluggish offense exploded on Sunday night against their division rival. Dak Prescott threw for 330 and four scores in three quarters worth of action to help clinch the NFC East crown. While home field advantage isn’t completely out of the question, the Cowboys will likely have to settle for a home playoff game and try to hold off the Rams and Bucs for the two-seed in the NFC.

3. Los Angeles Rams (11-4) Sean McVay and the Rams secured a playoff berth with Sunday’s win against the Vikings but the next two weeks will determine whether the Rams will be playing the Wild Card round at SoFi Stadium. The Cardinals are only one game back and the Rams have two teams fighting for their playoff lives, Ravens & 49ers, left on the schedule. However, the Rams can outright clinch the NFC West with a win and Cardinals loss on Sunday.

4. Tampa Bay Buccaneers (11-4) The defending Super Bowl champs clinched the NFC South title for first time since 2007 with Sunday’s dominant win over the Panthers. Technically, the Bucs are still in the mix for the top seed in the NFC, but what is a more likely scenario would be the Bucs winning out against two teams already eliminated from postseason play in an attempt to climb the NFC standings to secure a higher seed and potentially two home playoff games.

5. Arizona Cardinals (10-5) The Cardinals are in a full blown collapse at the moment. If you rewind the clock back a month, the Cardinals were looking like a shoe-in for the top seed in the NFC, but after three straight losses, Arizona has now lost control of the NFC West and are likely to start their postseason on the road. If the Cardinals have any chance of taking back the NFC West, they will need a win against the red hot Cowboys this upcoming Sunday.

6. San Francisco 49ers (8-7) This is where it starts to get interesting in the NFC. The 49ers blew a 10-point halftime lead against the Titans and now find themselves still in danger of missing the postseason. On paper, the 49ers have a winnable matchup against the Houston Texans this Sunday, but as the Chargers learned in Week 16, this team should not be taken lightly. If the 49ers lose to the Texans, they may face a win or go home scenario against the Los Angeles Rams in Week 18.

7. Philadelphia Eagles (8-7) The Eagles swiped the 7th and final playoff spot in the NFC from the Minnesota Vikings with Sunday’s win over the hapless New York Giants. And in true NFC East fashion, the Eagles will have to go through the Washington Football Team and the Dallas Cowboys over the final two weeks in order to punch their ticket to the postseason.

Other NFC Teams Still in Contention

Minnesota Vikings (7-8) The Vikings close call losses in 2021 might just cost this team a trip to the playoffs. When you look ahead to a Week 17 matchup against Aaron Rodgers and the Green Bay Packers, who are undefeated at Lambeau Field this season, it doesn’t exactly feel like the Vikings are going to make up ground in the wild card race. A win would go a long way to keeping Mike Zimmer’s team in the mix for a postseason berth.

Atlanta Falcons (7-8) Despite some tough losses during the 2021 season, the Atlanta Falcons are still in the mix for a playoff spot. However, they will need to win their final two games (Bills & Saints) along with some help in order for Arthur Smith to make the playoffs in his first season as Head Coach.

New Orleans Saints (7-8) Fresh off of a humiliating loss on Monday Night Football, the Saints chances of making the postseason are becoming increasingly more difficult. Now, the Saints have a schedule that could see them win their final two games (Panthers & Falcons) but they will still need help from the 49ers, Eagles and Vikings in order to make it inside the NFC’s top seven.

Washington Football Team (6-9)Which brings us along to a team that is currently three games below .500 but still mathematically in play for a postseason spot, the Washington Football Team. Ron Rivera’s squad will finish out the season against two divisional opponents (Giants & Eagles), which are winnable games, but will require a ton of outcomes playing out perfectly in order to see the Football Team make the postseason for a second straight season.