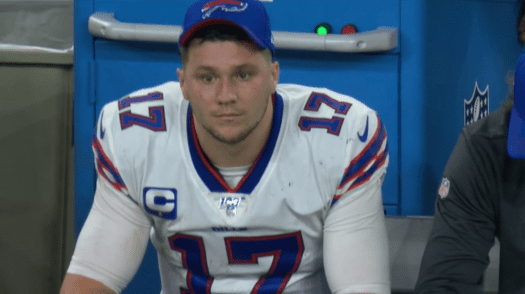 The Buffalo Bills and Cincinnati Bengals both overcame double digit deficits in regulation, only to lose in overtime.

The Baltimore Ravens, Pittsburgh Steelers and Washington Football Team nearly snatched victory from the jaws of defeat after trailing by 20-or-more points, only to come up short.

So what is the common trait amongst these five losing efforts? Desperation.
The Bengals scenario changed drastically after squandering a three point lead in OT, which not only cost them the lead in the AFC North, but now has them on the outside-looking-in at the AFC playoff picture.

Similar to Cincy, the Bills can no longer worry about winning the AFC East, and instead must focus on salvaging a postseason berth. As Buffalo has now lost three-of-their-last-4 and are clinging to the final wild card spot.

Although, this playoff picture could change drastically depending on the health of Baltimore Ravens quarterback, Lamar Jackson, who suffered an ankle injury during Sunday’s loss to the Cleveland Browns, most of these teams mentioned mostly control their own destiny.

However, the teams sitting inside the Tater’s Top 5 after Week 14 of NFL action, have no such postseason worries at the current moment.

Tater’s Top 5
1. Cardinals – Although this team may be reintegrating the likes of Kyler Murray and DeAndre Hopkins back into the fold, they are still a force to be reckoned with on both sides of the football.

2. Buccaneers – This team is starting to get healthy on both sides of the football. Shaq Barrett is beginning to resemble the man we saw during the Bucs Super Bowl run last postseason. Tom Brady is continuing to play at a league MVP level and this team will welcome back Antonio Brown in the near future. The defending champs’ arrow is pointing up at the right time of the season.

3. Packers – Although it wasn’t a pretty start against the Chicago Bears on primetime football, the Green Bay Packers certainly finished strong at Lambeau Field. Unfortunately for Chicago, Aaron Rodgers’ 341 passing yards and four touchdown passes still suggests that he does indeed still own this team.

4. Chiefs – Their 3-4 start to the season is way behind them at this point. And it’s not the vaunted Kansas City offense that has been resposible for their 6-game winning streak. Believe it or not, the Chiefs defensive unit has held their opponents to less than 10 points in their last three games. Sunday’s 48-9 victory over the Las Vegas Raiders was their most impressive of the season.

5. Patriots – Although idle in Week 14, it’s still hard to believe the Patriots beat a playoff caliber team by throwing the ball a grand total of 3 times. Wow.

Who’s your daddy… and what does he do??? It’s pretty simple. Aaron Rodgers owns the Chicago Bears. Think about this, the Bears had a 10-point lead, got two first half touchdowns from Jakeem Grant and took a 6-point advantage to the halftime break… and still lost by 15. Acceptance isn’t always easy, but Rodgers four scores, 314 passing yards and no interceptions might be the perfect way for him to say goodbye to his division rivals if this his last go-round in a Packers uniform.

Bum shoulder? No problem: Dalvin Cook’s 205-yard rushing performance in a must-win game on Thursday Night Football is already impressive enough. Throw in the fact he scored two touchdowns while playing through a separated shoulder… Now you are talking about a career defining performance.

Chiefs vs. Chargers – To quote the great Ric Flair, “To be the man, WOOOOOO, you got to beat the man.” The Chargers have the opportunity to take the lead away from the team that has owned this division since Patrick Mahomes became the starting quarterback. If Justin Herbert wants to make a statement that the Chargers are for real, he’ll have his chance to go toe-to-toe with the defending AFC champs on primetime football.

Packers vs. Ravens – The health of Lamar Jackson will need to be monitored but the Ravens find themselves in need of a win to fend off the Bengals and surging Browns in the AFC North. The Packers however, are still in the hunt for the number one seed in the NFC and could capitalize on a potentially wounded Ravens’ offensive unit, if they are without the most electrifying player in all of professional football.