NL Central Thoughts As The 2nd Half Begins 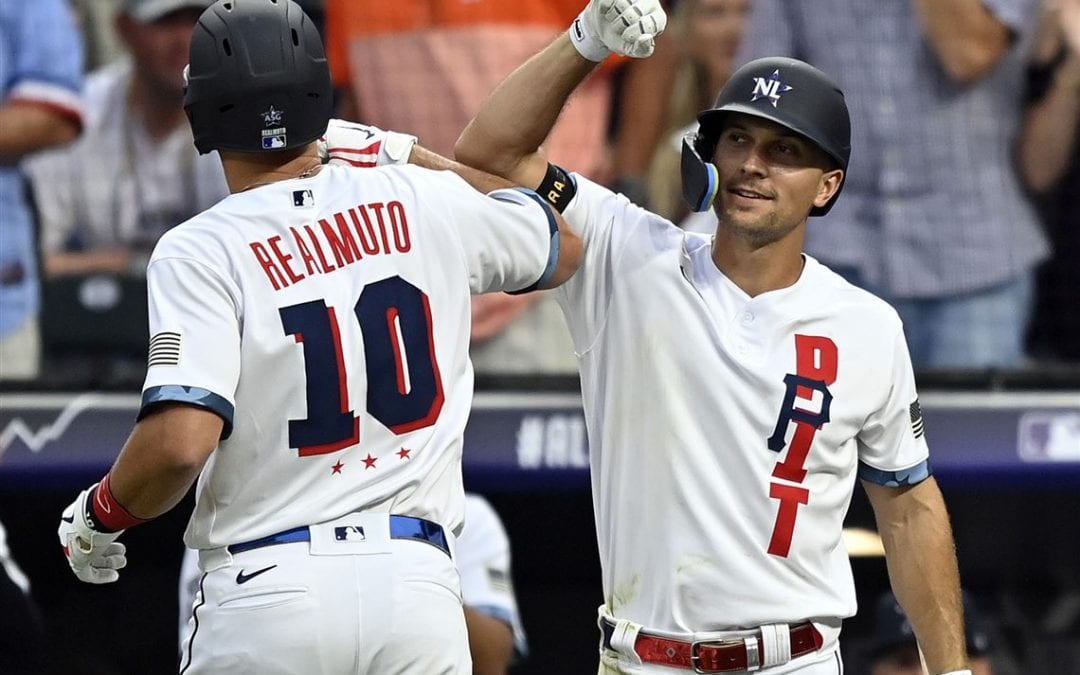 When you turned on the 2021 All-Star Game on Tuesday night, were you expecting two members of the Pittsburgh Pirates to be starting for the National League?

In a lineup with stars like Fernando Tatis Jr. and Freddie Freeman, a pair of Buccos were also in the lineup: center fielder Bryan Reynolds and second baseman Adam Frazier. Based on the numbers, it was hard to argue that they weren’t deserving.

After posting a .749 OPS through his first five seasons across 510 games, Adam Frazier has boosted his OPS to .860 through 89 games in the first half this year. Frazier’s .330 batting average is third in MLB, with Vlad Guerrero Jr. leading baseball with a .332 figure.

Looking at the Statcast data for Frazier paints a fascinating portrait. His approach at the plate doesn’t generate hard-hit balls but he does an excellent job at putting the ball in play and avoiding strikeouts. Frazier’s walk rate is also slightly below average, further showing he’s an antithesis to the three true outcomes approach very common in baseball.

If Frazier is notable for his unique approach to hitting, then Bryan Reynolds stands out for who he replaced in center field: Andrew McCutchen. Reynolds not only has been tasked with replacing McCutchen but he was also traded for him in January 2018, when the Pirates bid farewell to one of their most iconic players by sending him to the San Francisco Giants.

Reynolds had a strong rookie season in 2019, finishing fourth in Rookie of the Year voting with a .880 OPS. However, the 2020 pandemic season was very harsh on him, seeing his OPS drop to .632 with an average under .200. A return to normalcy in 2021 meant a return to productivity for Reynolds, with a .906 OPS. He’s also walking at a higher rate and striking out at a lower rate than he did in 2019.

While I doubt anyone expects Reynolds to be McCutchen 2.0, it feels very encouraging for the Pirates knowing that replacing the production of McCutchen in center field has been going very well this season.

The rest of the Pirates roster has had its struggles but it shows that even during a frustrating season of a rebuild, stars can still emerge.

Meanwhile, the Chicago Cubs are looking very likely to bid farewell to one of their biggest stars in a trade. Kris Bryant is unlikely to remain in Chicago after the trade deadline, with the Cubs sitting eight games behind the first-place Milwaukee Brewers. The Mets look like the leading candidate to acquire the former MVP and he’d be an especially valuable hitter against left-handed pitching. The Mets rank 22nd for OPS against southpaws and would instantly get a boost from Bryant’s 1.148 OPS across 78 PAs this year.

Bryant’s departure from the Cubs would signify the end of an era at Wrigley. From 2015 to 2020 they made the playoffs five times in six years including their historical 2016 World Series victory, providing the most successful era of Cubs baseball since the 1900s.

While 2016 will be more than enough to last Cubs fans a lifetime, it still feels like they could’ve achieved more. In 2018, they lost a one-game playoff against the Brewers at Wrigley for the NL Central title and then got eliminated from the postseason when they again lost at Wrigley, this time against the Colorado Rockies in the Wild Card Game. More recently, their 2020 NL Central title in the shortened pandemic season didn’t amount to anything, getting eliminated by the Miami Marlins in a three-game series.

The 2016 Cubs will forever be one of the most legendary World Series champions but with Bryant’s days in Chicago likely coming to an end, it feels fair to wonder if the Cubs should’ve been a dynasty instead of just a one-off.

So far I’ve looked at the last place and third-place teams in the NL Central so it’s probably time to look at the first-place Brewers.

In Milwaukee, the story of the season has been excellent pitching. Brandon Woodruff, Freddy Peralta and Corbin Burnes have all provided ERAs under 2.40 across 50 combined starts. Burnes has been especially excellent at producing strikeouts while avoiding walks, with an 8.53 K/BB ratio that only trails the godly Jacob deGrom for pitchers with at least 80 innings pitched this year. Meanwhile, in the bullpen, Josh Hader continues to be one of the best relievers in baseball with a 1.49 ERA, a WHIP under 1.000, 15.6 K/9 and just one blown save in 22 chances.

I’ve already highlighted four excellent players on the Brewers and none of them have been Christian Yelich. That feels odd but looking at the outfielder’s numbers this year, it’s pretty reasonable.

While Yelich hasn’t been a disaster, his production has been rather pedestrian. His 112 OPS+ means he’s been just 12 percent better than the league average this year, a sharp dropoff from his 2018 OPS+ of 164 and his 2019 figure of 179. If you’re looking for a Brewer who has been having a career year, let me direct you to catcher Omar Navarez. His .865 OPS leads all catchers with at least 250 PAs.

The NL Central doesn’t quite have the star power of the NL East or a budding new rivalry like the NL West, but it still has storylines worth following in the second half.