If Nothing Else, The Orioles Starters Are “Available” 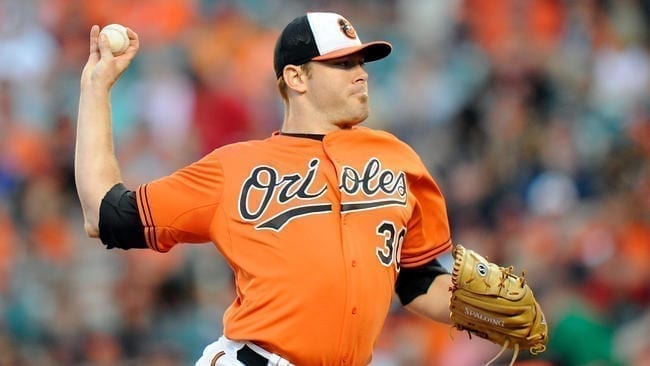 In a recent article, I talked about how I feel the AL East race is going to be close throughout the season and I broke it down, unit by unit, to show why I feel that. When talking about the rotations, I pointed out that an advantage the Orioles had was health. In this article, I will look at that further.

I feel that one of the most underrated things in sports is availability. It isn’t often that your back up players are as good or better than your starting players. Yes, there are cases where a player can perform well in short stints or you have a young player that just explodes on the scene but for the most part, those guys are back ups for a reason. Ravens fans have grown accustomed to availability when it comes to Joe Flacco and we saw the consequences of what happens when he missed games for the first time in his career this season.

The Orioles rotation is filled with middling starters that are almost always available and that is very important for a team that, right now, can only really go 6 deep (this includes Worley) in the rotation. Yes, we have a few other pitchers we can put out there but they aren’t guys you want starting in the majors for any real extended period of time.

The Orioles likely rotation is Tillman, Gallardo, Gausman, Jimenez and Gonzalez, in some order. With the exception of Gausman, who is just now becoming a full time the starter, the other members of the rotation have shown that they are durable pitchers that Orioles manager Buck Showalter can feel confident in taking the ball every 5th day.

Chris Tillman became a full time ML starter in July 2012. In the 3 full seasons since that happened, Tillman has started anywhere from 31-34 games. In 2013 and 2014, he throws over 200 innings. Last year, he only threw 173 innings. Part of that was that he threw a few less starts and part of it is because he had a bad year and didn’t go as deep into games as he had in the previous seasons. After averaging over 6 IP per start in 2013 and 2014, his average fell to 5.5 innings per start.

New Orioles starter, Yovanni Gallardo, has thrown 30 or more starts in 7 straight years. His innings total has never fallen below 180 IP but it’s also only been over 200 twice. Now, part of that could be the NL rules he played in and being pulled for pinch hitters. That obviously won’t happen here but still, he isn’t a guy who eats a ton of innings but he is a guy that is consistently taking the ball every 5th day.

Ubaldo Jimenez has started 32 or more games in 7 of the last 8 years. The exception was 2014, his first year in Baltimore. He pitched poorly and had 5 stints out of the pen and had an “ankle injury” that caused him to miss some time. He got a few minor league starts in his “rehab” assignment that year as well. Like Gallardo, he doesn’t eat a ton of innings but he is usually good for 180-200 IP in any given season.

Miguel Gonzalez became a starter in the majors in 2012. Since then, he has had 6 bullpen stints but overall, he has been a full time starter. Since becoming a full time major leaguer in 2013, he has started 26 games twice and 28 another. Like Tillman, he went from averaging over 6 IP per start to 5.5 in 2015. And, like Tillman, part of that was because he pitched poorly. He had an injury in 2015 and the team has played with his options and sent him down a few times. He has also been a guy that they will skip every once in a while, since he seems to pitch well with a little extra rest. But, for the most part, he has been a reliable guy to take the ball every 5th day.

We will see how Gausman fares but he had 31 starts between the majors and minors in 2014 and last year, he had 20. He also had 8 bullpen stints, as the Orioles screwed up his development some and then he had an injury and that kept him out of the majors for around 6 weeks. How many innings the Orioles allow their best pitcher to go this year will be interesting to me and its a shame they didn’t have him starting from day 1 last year, as he probably could have at least another 40ish innings under his belt from 2015.

With the exception of Gausman, this isn’t a spectacular staff but this is an available staff and that isn’t something to overlook. I know the joke can be, well who cares if they are available if they aren’t good and that’s a valid point but these guys have shown that they can be league average type guys and being available and league average is very valuable.

The Orioles boast one of the AL best bullpens and while it is a pen that can eat innings and its a pen that is accustomed to pitching a lot of innings, putting a little less stress on them would obviously be a good thing.  Combine that with the idea of not having to go to pitchers who shouldn’t be starting major league games and the idea of availability becomes increasingly more valuable.