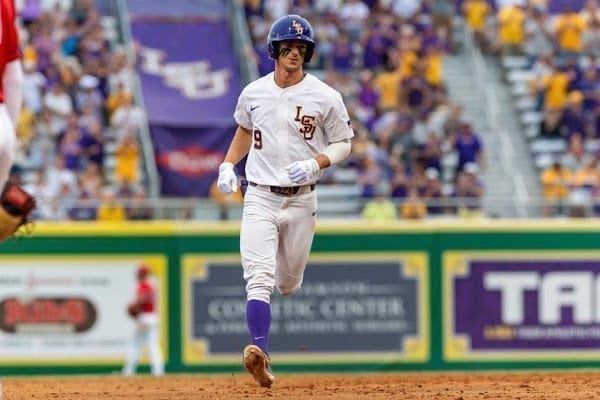 Another day, another eight more prospects added to the Orioles’ system. While the first day was filled with two big values for the team at #1—Adley Rutschman—and #42—Gunnar Henderson—Day 2 was filled with players who could make signing those first two picks possible. Despite the obvious cost savings, a few of these players additionally offer some intriguing upside to the team’s farm system.

Following Stowers, the Orioles picked another toolsy outfielder eight picks later in Zach Watson. Out of LSU, he has a much better chance of sticking in center field than Stowers, grading out as potentially a plus-plus defender and plus-plus runner. He isn’t a power hitter—ISO of .173—but it is playable, especially considering that his exit velocity numbers suggest he has more power to give. Where he lacks—and what keeps him from rising even higher in the model—is his plate discipline. Watson walks very little—6.5% in his college career—while striking out over 2.5 times as often.

Watson’s DRAFT score came in at 0.72, good for 81st in the rankings. This is comprised of a 36.2% chance of reaching the majors and 4.72 RAR assuming he reaches the majors. At the time of the pick, Watson was the 14th-best player available who was plausibly signable.

Young—Hasn’t turned 21 yet—shortstop—second only to shortstop on the positional difficulty scale—plus defense and doesn’t strike out. So why isn’t he higher on the DRAFT board? He has limited power—don’t let this season’s .290 ISO fool you—his .450 BABIP is untenable in the minors let alone the majors, and he walks a little over 7.5% of the time. His profile portends a utility player, and his DRAFT score agrees.

Ortiz’s DRAFT score came in at 0.286, good for 554th overall Note: A mistake in inputting the data had Ortiz’s score at 947th place with 0.226 in previous articles. However, the model gives him a 43.8% chance of reaching the majors, but an expected contribution of 2.01 RAR. This screams utility player, or a defensive substitute with limited impact unless he improves on his current evaluation.

Another young shortstop with a light bat. There is question about if Hernaiz will stick at shortstop, with some thinking that his ultimate home will be second base. It’s hard to say if the slot value of $402,000 will get Hernaiz to forego his commitment to Texas A&M, but considering his Baseball America rank of 439 would imply that it’s possible. The DRAFT model had Hernaiz’s score at 0.197, good for 1220th overall. However, it’s important to note that Hernaiz may represent a blind spot in the current model—lower-ranked high school players—due to the lack of overall information able to included in the model.

Handley’s best tools are his plate discipline—he carried a 12.2% walk rate against a 16.5% strikeout rate in college—and his defensive ability—reputed to be a good framer and caught 10/15 attempted basestealers this season. His bat isn’t overly impressive in terms of bat-to-ball nor power, which will be what determines his future in the game. The DRAFT model gives him a 31.3% chance of reaching the majors, putting up 3 RAR should he get there, combining for the 414th-best score of 0.321.

A well-traveled—Louisiana Lafayette to JuCo to TCU—Senior outfielder, Rizer doesn’t have any loud tools or major performance calling card. He has some power—.216 ISO this year—walks a little—10.8% walk rate in college—and doesn’t strike out too much. However, these numbers and lack of major tools as a Senior sinks his DRAFT score significantly. At 0.141, Rizer comes in at number 1570 on the DRAFT board, with a 7.6% chance of reaching the majors.

Formerly a Little League World Series star, Mclarty wound out at the College of Charleston in the Colonial Athletic Association. Mclarty is an intriguing prospect from a performance perspective, if not from pure stuff. 10.1 K/9 and a 2.6 BB/9 over his career, his Junior year saw him put up a 1.87 ERA in 101 IP. Had 1st-round pick George Kirby not been in the same conference, Mclarty would have been the top pitcher in the CAA. His DRAFT score of 0.315 lands him 437th on the board Note: Due to an error in compiling the data, Mclarty was left of previous articles and lists based on the DRAFT model.

Similar to Mclarty, Gillispie represents a performance over stuff player. 108 strikeouts, 21 walks, and a 2.58 ERA in 80 IP will get you noticed, even if you don’t have the best stuff. He didn’t face the strongest opposition, plays in an extreme pitchers park, and doesn’t have a long track record against wood bats, but his fastball-slider combination gives a decent bullpen backup plan. His DRAFT score of 0.399 comes in at 244th overall on the board, right near where he got picked at 258th.

Cannon has taken a winding road to being drafted. He showed up at Sam Houston State as a two-way player, coming out of the bullpen and playing behind the plate. After taking a year off from catching in 2017, Cannon became exclusively a catcher in 2018-2019. His Senior year was impressive, but a .372 AVG was likely boosted by a likely unsustainable .413 BABIP. In addition, there isn’t much pop in the bat—.151 ISO—and the plate discipline isn’t stellar—34 career walks and 84 career strikeouts. Cannon’s DRAFT score doesn’t predict much success, coming in 1470th with 0.156.

Early next week, after having some time to process the final day of the draft and seeing how some of the signing bonuses shake out, we’ll have a final discussion about the Orioles’ draft this year. In addition, we’ll take an early look at the 2020 Draft, as it’s likely that the Orioles will be in a similar position to this year.