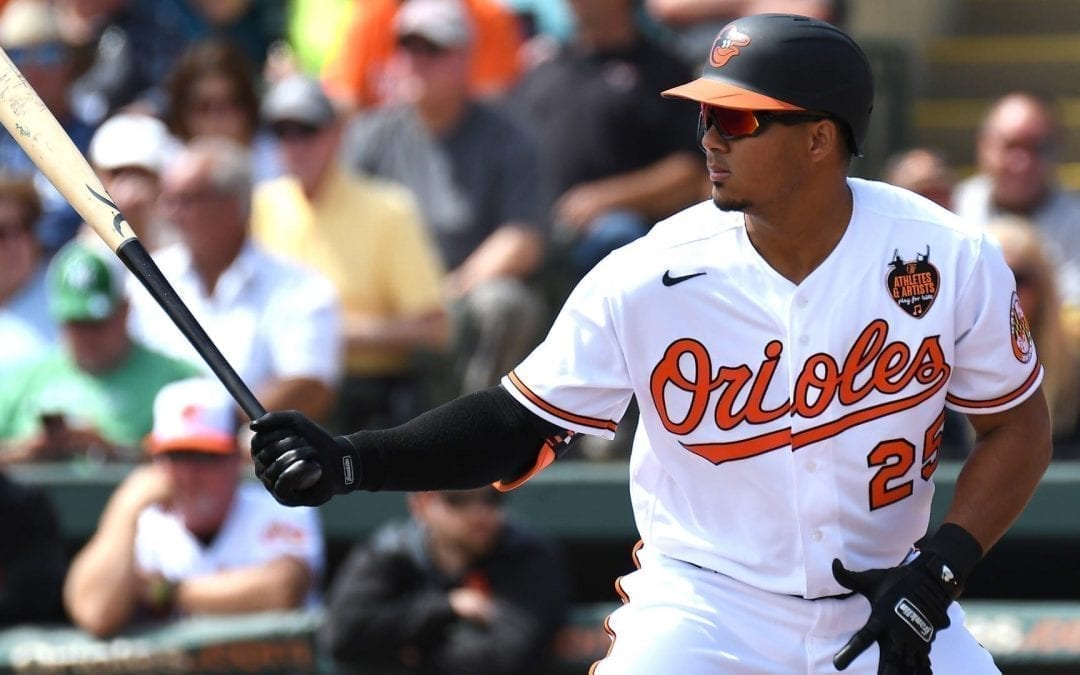 The Toronto Blue Jays are leaving Baltimore having swept the Orioles in a 3 game series. The Orioles have now lost their last 4 games overall, and are 12-12 on the season as they await the arrival of the Boston Red Sox tomorrow night.

Here we give 25 thoughts on the Orioles prior to the first pitch of Game 25.

1) The Orioles have overachieved in-regards to the expectations the baseball world had for the O’s entering the season. It’s made for an enjoyable product. They aren’t some juggernaut, but nor have they been the complete abysmal embarrassment of ’18 and ’19. They’ve been competitive, representative, and have been swinging-up. You respect that they’ve played with some pride.

2) I’m slow to change opinions, so 24 games isn’t going to get me to deviate from opinions I had before the year. The player on the Orioles roster (currently injured) I’m still most excited about is Austin Hays. Hays struggled in his 69 ab’s over 19 games prior to going to the injured list. Struggling over +/- 70 ab’s doesn’t concern me. I’m still very confident Hays can be the long-term answer in CF.  He does have to prove it though, and the injury – fluke or not – does raise an eyebrow. He has to show he can stay in the lineup. Would be good to see him get back soon, and finish strong.

3) So I just said I remain most excited about Hays on the current roster (including the IL). Santander might make me eat those words though. Santander has a .701 Slugging Percentage. He’s showing major pull power, combined with the strength to take pitches out the opposite way. He’s playing a very livable RF.  Santander had a brutal September ’19. Great to see him rake right away here in ’20. His floor at this point is a productive role player. His ceiling is showing to be pretty high.

4) I enjoy watching Alberto play. Maybe because in this 3 True Outcome era, he stands out. He showed more pop last August, before tailing off last September. Here in ’20, he’s already put up 12 doubles in his 102 ab’s. Playing only 2nd, I think he looks better around the bag, and more confident. (Public metrics don’t match my eyes yet.)

5) Most Orioles fans seem ready to write of DJ Stewart as a possible contributor. Him being horrible over 14 ab’s (8 k’s) means nothing to me. He looked really bad. While he was taking walks, his overall approach was poor. He was trying to hit the Warehouse with every swing seemingly. That said, it was 14 ab’s. He’s not as versatile, but offensively I believe he can be like a Steve Pearce type of talent. That type of production, when the player is controlled, and costs very little – has value. I’d like to see Stewart back up.

6) I don’t think much needs to be said about Davis. It feels like piling on at this point. I will say if the Orioles want him gone, it’s on them, it’s not on Chris to make that decision for them. They should want to pull the plug, the money is spent. Even with an extended roster, he’s hurting the team. Thank him for his past performance, and move on.

7) The 2020 rules are helping Baltimore. The expanded rosters (30 to start, 28 currently) are helping the O’s mitigate their primary weakness (starting rotation) with one of their strengths (the bullpen). A shorter-season, means the rotation isn’t as exposed. Obviously easier to get through 60 games than 162.

8) Glad Tate has returned to the pen. Hoping Harvey joins him soon.

9) Tanner Scott really does have significant ability. Lot to ask him to be a BJ Ryan, or an Andrew Miller; but he has that type of upside.

10) Since Ruiz came back up in the 2nd half last year, he’s shown more pop. Has changed his launch angle. Overall that’s good, he does need to be able to hit for some power. Last year, I thought he had a lot of good ab’s, often without results. I think he’s capable of hitting for some average, if he is willing to utilize all fields, and spray the ball some. Despite his 6 homers, he’s hitting just .217 currently. Also only 2 doubles. I like Ruiz. He plays quality defense. I think he has a chance to be regular over a several year period; but I sense he’s fallen into the trap of trying to pull everything for power. Let’s see what adjustments he can make the rest of the way.

11) Nunez’s future on the Orioles – or elsewhere – is as a DH, who occasionally gets time at 1st or 3rd. The power is real. The exit velocity is real. When he squares, he hits balls hard and long. The defensive issues are also real. When he’s hot, he can carry a team for multiple nights. With the NL having the DH this year (and seemingly going forward), there are more teams that could use him. He shouldn’t be completely written off as multi-year option here in Baltimore either.

12) Dwight Smith would be a fine reserve OF if he was an average ish OF, especially if he had the ability to play CF. Since he doesn’t, and he plays the OF like Geronimo Berroa; he’s exposed over extended playing time.

13) Why weren’t / aren’t Zac Lowther, and Alex Wells at the alternate camp at Bowie?

14) LeBlanc isn’t ‘good’, but he’s better than his current near 8 era.  Milone has been effective. Wojciechowski surprises with his swing and miss ability. They are giving the rotation some stability, and I particularly like that Milone isn’t walking guys. I still don’t really want to watch them start because they aren’t long-term options. But if you had Akin and Kremer starting, gaining experience; it would be nice to have Milone and Wojciechowski coming behind them as tandem-starters.

15) Sulser is older than you’d think, he’s walking too many guys, and I don’t really buy him as a closer – but I like his mentality. Short memory. Tries to attack. Nice under-the-radar addition.  Not sure I’ll ever be super comfortable with Castro in high-leverage situations, but continue to love the arm. Armstrong has been good as well. I’d like to see a bit more of him.

16) Givens is having the start to the year you’d want to see from him, if you want to trade him prior to the deadline. He’s got the additional year of control. If he’s dangled, he should bring back a decent return. I’m not of the opinion you have to move him though.

17) Carroll missed basically all of last year. Given that, and him probably having a lot of adrenaline going in his outings this year… I don’t want to completely bury the guy. But all I can currently see with him is a right-handed Brad Pennington. Big arm, no idea where it’s going. High velo, not a lot of movement. Phillips was up and down last year. He’s back at Bowie now. There is some ability there. 7 walks in 7.2 innings isn’t going to work though.

18) Alex Cobb is under contract for ’21, and he’s owed some deferred money as well. With him missing most of ’19, and the money owed; my assumption was he wouldn’t be able to do enough prior to the deadline to be moved. And if the Orioles were able to move his contract, that would limit any return. He’s pitching well enough right now, and there are enough starting pitching injuries throughout the game, where moving him is possible. If the O’s agree to pick up his remaining dollars, and someone offers more than expected player wise – sure move him. With the expectation the return would be minimal, I’m completely fine with him being back for ’21, and having his experience help lead what would figure to be a younger rotation. Could also still move him mid-’21.

19) Most importantly, our condolences to John Means on the death of his father. It has to be a difficult time for Means. The O’s surprising so far, and Means having only thrown 7.2 innings is a real surprise. His velocity gains are interesting. Have to watch his secondaries. Those velocities are also up. Does he lose movement? His change was excellent last year. Couple that with the velo gains, and he really becomes interesting. Finish strong.

20) While we’re all waiting for the beginning of the Adley Rutschman era, Pedro Severino and Chance Sisco are giving the Orioles a lot of production at the Catcher position.

21) Jose Iglesias has hit the IL. His nearly 2,800 career ab’s say he’s a below average offensive player. However, while he only had a .724 OPS last year, he did have 35 xbh’s and a .288 average. This year he has 9 doubles in his 55 ab’s. At the minimum, he looks like a legitimate Major Leaguer, and obviously his calling card is his defense.

22) The Orioles did a good job with the Valaika, and Velazquez additions. Both have a sub .600 OPS, but they have position versatility, and the ability to play a quality SS. I’ll never forget that ’08 season, when the O’s used Citron, Bynum, Fahey, Hernandez, and Torres at SS, and seemingly none of them could play the position at the ML level.

23) Why is Ryan Mountcastle at Bowie? The Orioles have gained the additional service time. They shouldn’t even have to ‘worry’ about him obtaining Super 2 status at this point. He should be gaining the experience available to him now, and facing ML competition.

24) They might as well promote Yusniel Diaz with him.  Diaz can take over LF (or RF if you prefer him there vs. Santander). Mountcastle can take over 1st. Nunez DH.  At the minimum Diaz will play a better OF than Smith. If Diaz has to go back to the Minors to begin ’21, that’s fine. He should still be getting competitive ab’s now.  If you don’t want to bring up Diaz now, bring back Stewart with Mountcastle, and Stewart and Mountcastle can split 1st and LF.

25) The news about Trey Mancini continues to be encouraging. He seems very confident he will be ready to go to begin ’21. Out of sight, out of mind to a degree; but we shouldn’t forget that last year’s Most Valuable Oriole had a .899 OPS, and 75 xbh’s. Let’s say Mountcastle and Diaz came up tomorrow, and Diaz does enough you want to pencil him into starting on an OF corner to begin ’21. Then you’ve got Mancini, Mountcastle, and Nunez for 1st and DH. Depth, options.  Those are good things.