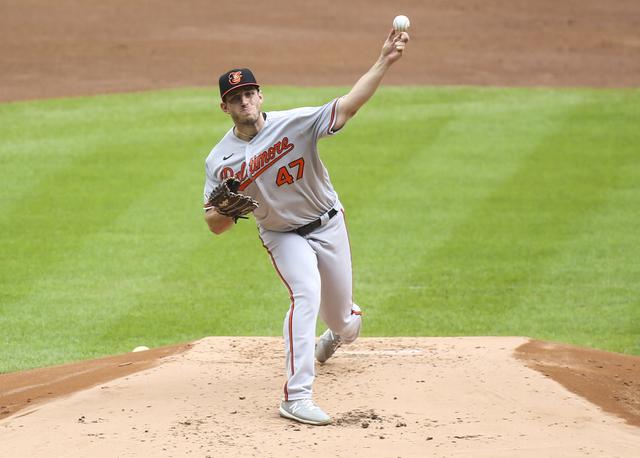 Every week that we have baseball this season, and enjoy every single one because it could disappear at any given moment, I will be taking note of the three hottest Orioles and the three coldest.

It appears 2019 John Means is back. The increased velocity at the start of the season was nice to see and is usually an indicator of better results but it was clearly effecting his control. The speed of his off-speed pitches also increased and especially his change-up flattened out to become much more hittable. The past couple outings Means has dialed back his velocity a tick or two (sitting between 92-94 in Sunday’s start) and his command has improved with it. The weapon that was his change-up isn’t all the way back but it is improving and he is mixing in his improved curveball more often while using his slider less. The spin rate on all of his pitches are up, especially his fastball which is sitting in the top 7% in baseball. That could explain why his average launch angle is way down from last year. Unfortunately that hasn’t stopped some mistake pitches being hit over the wall behind him but it is a good indicator moving forward. I’m sure settling into a routine hasn’t hurt either and it will be interesting to see how he does in his last two or three starts of the season.

I’m sure there will be a week at some point in his career when Mountcastle will show up on the 3 down side of this list (or at least not show up at all, somewhere in the middle) but this is not that week. He continues to show off his hit tool, batting .333 or higher against every single pitch type (fastballs, breaking balls, and offspeed). His speed is surprising for someone of his size but its in the top 20% of MLB players and it has helped him put pressure on the defense and register a few infield hits. The most surprising part of his early success continues to be his plate discipline. It was funny and ironic that the guy known for being Adam Jones-esque in his approach at the plate started off his career with a walk and had a couple in his first few games. But he continues to lay off pitches outside of the zone and hover around a 10% walk rate which would be an amazing development for a guy who can hit the ball with authority to all parts of the field. As highly anticipated as Mountcastle’s debut was you truly couldn’t ask for a better start to his career. He has quickly become the best player on the team with Anthony Santander out for the season and is already hitting in the premium spots in the Orioles’ lineup.

Stewart really fell off this week after a Barry Bonds style weekend against the Yankees upon being called back up. His OPS dropped by over .800 points to instead give him a week more akin to a Mike Trout. In all seriousness it has been great to see him continue his new found success after figuring things out at the alternate site in Bowie. It speaks highly of the O’s player development capabilities that they were able to figure out why he was struggling and fix it that quickly. It also speaks to Stewart’s willingness and ability to go out and do it. He had almost the same exact statistics from the week before but just over more at bats. At one point he had six homeruns over six games and they weren’t cheapies. His exit velocity, launch angle, barrel percentage, and walk percentage are all well above league average. He must really be feeling confident because he even made some really nice plays out in right field this week which is much different from last year when he slipped running in for a ball and had it bounce off of his head.

I can admit when I’m wrong. I stated on this exact spot of last week’s ‘3 Up, 3 Down’ article that Wojciechowski could be good coming out of the bullpen. At least in his first two appearances appearing in relief that is far from true. He is getting lit up and giving up homeruns in bunches. At this point I would be surprised if he makes it through the offseason to remain with the team. Unless there is no interest elsewhere and he signs with the Orioles on a minor league deal with a spring training invite. He served his purpose the past couple seasons by eating some innings but the wave of young arms with big league potential is just about to crest. He has two weeks to try and show that he can be a valuable bullpen piece but it is getting harder and harder to believe that is the case.

It was only a matter of time before this happened. The only real signing of significance that the Orioles made in the offseason was getting Iglesias to agree to a one year contract with a team option for 2021. He was brought in to stabilize the infield defense at one of the most important positions on the field. He is known as a slick fielding singles hitter who can give you a solid batting average but doesn’t walk or hit for much power. Instead he came out of the gates scorching hot, hitting around .400 into early September. That sounds so much more impressive if you don’t know the season didn’t start until the end of July but it is impressive nonetheless. Most of his games have come from the DH spot because he has been dealing with lower leg injuries all season including a brief IL stint. The easiest decision of the off-season will be to exercise that option. Its only for $3.5 million and you have to expect that he will be at full strength next spring training to provide the defense we signed him for. If he gets off to another hot start next season he will be a trade asset but even if not he will help the young pitching prospects get their feet wet.

Whenever Alberto has a slump I’m always worried that the bottom has fallen out of his Cinderella story of a guy who bounced from organization to organization until he is finally given a chance and never looks back. He has always seemed more David Newhan than Melvin Mora to me. But every time it happened last season he would bounce right back and keep slapping singles all over the diamond. What we know to be true is that he has great plate coverage and ability to make contact if the ball is anywhere near the plate. He rarely strikes out and almost never walks. Even though he makes a lot of contact it is amongst the worst in MLB when it comes to how hard. His exit velocity, hard hit percentage, and barrel percentage are all in the first percentile of the league. Bare minimum he is a solid bench player who hits lefties extremely well (.361 this year, .398 in 2019) and can play a solid if not spectacular second and third base. Most likely he will once again make me eat my words when he finishes the season with a .450 average over the next two weeks.

An auxiliary member of the MMAJA, Bob used to run the baseball blog ‘The Oriole Report’ before transitioning to podcasting about movies, TV, Video Games, and MMA. ‘The Redbox Report’ movie podcast was started in 2013 followed by ‘The Redbelt Report’ MMA podcast in 2016. In 2018 they were merged into ‘Phelan to Communicate’, a podcast that can be found on iTunes and a blog that can be found at http://PhelanToCommunicate.wordpress.com. Bob has also written for Konsume.com and BaltimoreSportsReport.com and delivers mail for a living in Baltimore County. Follow him on Twitter @TheOrioleReport.