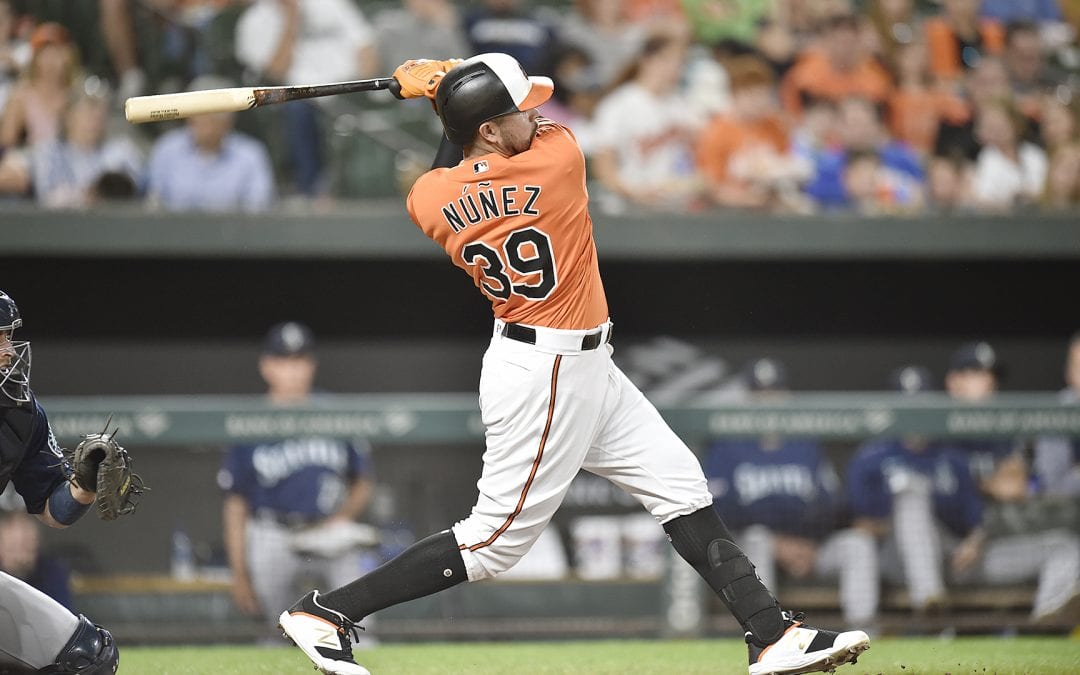 In a not completely unsurprising move, the Orioles designated Renato Nunez for assignment. The move saves Baltimore somewhere between $2-$4 million depending on what they would have had to pay him through arbitration, and opens up a spot on the team’s 40 man roster. The Orioles promptly filled that spot and a few others as well when they promoted Rylan Bannon, Yusniel Diaz, Michael Baumann, Isaac Mattson, Zac Lowther, and Alexander Wells to the 40 man roster.

That’s the bones of it, no more Renato Nunez – probably! – but there’s a lot more to discuss. For example, why did they do this? Nunez has some skills and he’s about to turn 27 in April, relatively young for a major leaguer. More vitally, he’s coming off a 2019 season that saw him hit 31 homers and a 2020 season where he hit 12 homers in 52 games, a 37 homer pace if he played all 162 games of a normal season. Nunez has power, and that’s a valuable asset, especially in a young player. Plus, there’s always a chance Nunez could take another step forward and become an even bigger power hitter. But step forward or not, guys coming off of two 30 homer seasons (effectively speaking) aren’t typically getting DFA’d. So what happened?

Well, there are some downsides to employing Nunez. For one, he’s not an especially good defender. The defensive metrics don’t like him much at third base and neither does the eye test. The Orioles seem to agree because after playing him at third in 2019, they moved him to first base for the majority of the 2020 season. The problem is, Nunez doesn’t really hit like a first baseman. He’s got power, yes, but he doesn’t really take walks or hit for average, so his on-base percentage is always pretty low. The end result is a lot of dingers, but not much else. To be worth something to a major league baseball team you have to bring more than just one skill to the table. If Nunez was an average or above average third baseman, for example, you wouldn’t be reading this article. But we are because homers alone, great though they may be, aren’t enough. Combine that with the positional inflexibility that Nunez, well, “offers” is maybe the wrong word, but let’s go with that anyway, and you can see that his employment in Baltimore was on shaky ground.

Another part of this move isn’t so much on Nunez himself as it’s on the Orioles roster, specifically Chris Davis and Trey Mancini. Davis still has two more years on his deal at $23 million per season, and despite the fact that the Orioles should probably just cut him (he hasn’t been good since 2016 and he’s been actively hurting the team for the past three seasons), for what ever reason they don’t seem inclined to do so. As long as Davis is on the roster, that takes up a spot (first base/DH) that could also be occupied by a guy like Nunez. Mancini’s had a rough run of luck, but reports indicate he’s finally healthy, cancer-free, and should be available whenever the 2021 season starts. When he comes back, great as that will be, Mancini will further complicate the roster construction. He could play some corner outfield, but he won’t be good at it, and given his health issues and the fact that he wasn’t ever a great defender when he was younger and healthier, he’s probably a first base/DH going forward. That’s another guy with the same defensive profile as Nunez. How many guys can you hold on your roster who play the same positions? I don’t know but three is probably too many.

The other aspect to this is cost. Yes, Nunez was only going to make around $3 million in 2021, but unlike Mancini who wasn’t going to be cut and Davis who is on a guaranteed contract, it was $3 million the Orioles didn’t have to pay. Cutting Nunez relieves Baltimore of the burden of that requirement. That’s now $3 million Baltimore can spend on pitching (more on that in a future article!), on some other free agent, or, sure, $3 million more the owner can put to his fueling his yacht. This is the real world, after all, and that’s how these things work sometimes. Hopefully though it’ll be reinvested back into the team. Either way though, cutting Nunez is money saved, whereas the team was going to pay Davis and Mancini either way.

So it looks like the Renato Nunez Era in Baltimore has come to an end. The Orioles took a shot on Nunez, and over 261 games for the franchise, he gave them 1.8 WAR. While it’s not nothing, it’s also nothing great and, honestly, nothing particularly worth keeping. Don’t feel badly though. This was not a failure. The important thing wasn’t what they got from Nunez, it was that they took the chance on him at all. The Orioles were in position to spend a roster spot on Nunez, they recognized his potential, took advantage of his availability, acquired him for free, and they did what all rebuilding teams should do: they gave him a shot. That it didn’t work out isn’t a negative. Instead, it speaks well of the organization that they tried at all. Not all good ideas bear fruit, but repeat the process enough times and you will find what you were looking for.

As for the 2021 Orioles, this likely means Trey Mancini will be back, healthy (at least initially) and expected to play a role. Ditto for Chris Davis, at least for now. And the young guys I mentioned in the first paragraph who are now proud owners of a 40 man roster spot, well, you could see them play a part in 2021 and subsequent seasons as well. Losing Nunez means keeping one of those guys, too.

As for Nunez himself, it’s not impossible he figures something out and turns into Nelson Cruz or name your preferred reclamation project, or just a better more rosterable version of Renato Nunez, but that’s probably a small probability. The far, far more likely outcome here is that Nunez gets another shot with another organization, does more or less what he did with the Orioles, and is out of baseball in two or three seasons. That’s the way these things tend to work.