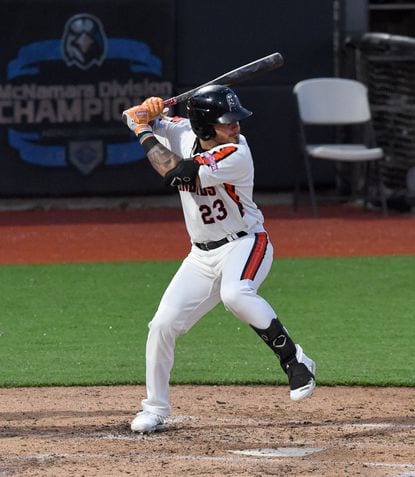 Baltimore Orioles General Manager Mike Elias only has two draft cycles under his belt, but one of the bigger takeaways from his drafts in Baltimore is that he places a heavy emphasis on adding strength up the middle. The early portion of his 2019 draft was dominated by these picks, and it continued with half of his six picks in the 2020 draft being up the middle bats.

It’s way too early to to evaluate whether or not this strategy has been successful, but the early returns have been highly positive and one of the most entertaining aspects of the 2021 minor league season has been the play of a handful of these draft picks, specifically one shortstop who I don’t think very many people saw coming.

2019 second-round pick Gunnar Henderson finished his first month of full-season affiliate ball with a .313/.391/.613 slash line, six home runs, an MiLB leading 30 RBI, and a 169 wRC+, while 2020 Competitive Balance A pick Jordan Westburg slashed .366/.484/.592 with three home runs and a 194 wRC+ with Delmarva before being promoted to High-A after Delmarva’s game on May 30th. Both of these top draft picks are highly regarded prospects in the Orioles system, with Gunnar Henderson being a recent addition to Top 100 prospects lists, and Westburg sure to be in the mix soon with his early play.

But go further down the list of Orioles top prospects and you will find plenty more shortstops, all performing fairly well so far in 2021. Adam Hall (11th ranked prospect) has gained some momentum after a dreadful start, upping his average to .250 with six stolen bases. He had just three hits through his first seven games and now has nine over his last seven. Anthony Servideo (24th ranked prospect) has a .489 OBP with at least one walk in 17 of his first 19 games, and Darell Hernaiz (28th ranked prospect) is showing more consistency at the plate. The 19-year-old even flashed his strength with this opposite-field home run the other day.

All of the excitement surrounding this group caused me to completely forget about Maikol Hernandez, the 19th ranked prospect in the Orioles system and one of two international free agents who received a signing bonus over $1 million from the Orioles a few months ago, and had comps like Manny Machado, Alex Rodriguez, and Carlos Correa thrown at him.

Add in guys who are predominantly second basemen in Terrin Vavra and Jahmai Jones, and the Orioles possess a truly talented group of middle infielders who are forcing some early promotions with their standout play.

The one name Orioles fans should be paying more attention to, however, is former New Mexico State standout Joey Ortiz.

Ortiz, 22, was a fourth-round pick back in 2019, with scouting reports high on his glove but a little more hesitant on his bat. He hit .342 with a .912 OPS, 15 home runs, 38 doubles, and 18 triples in college, but playing at 3,900 feet above sea level in Las Cruces, New Mexico has its perks. It was hard to question his college numbers too much though, seeing as Ortiz hit .304 with a .381 OBP in two summers playing in the Cal Ripken and Northwoods Leagues. The power numbers weren’t there, but the average was, his stolen base ability shined (27-32), and he walked just as many times as he struck out (34), while holding his own with a wood bat in the Northwoods League.

Unfortunately, it was a bit of a rough start for Ortiz as a professional in 2019. In 56 games for then Low-A Aberdeen, Ortiz slashed .241/.345/.267 with just three extra base hits (one home run). Despite the rough hitting numbers, Ortiz did walk at a 13 percent clip and struck out just 16 percent of the time, giving him something to hang his hat on going into a 2020 season that never happened. But at the end of the day, Ortiz seemed to have the profile of a defensive-savvy middle infielder you keep around as depth within the upper-minors of your system.

Fast forward to 2021 and Joey Ortiz wasn’t considered a Top 30 Orioles prospect by most outlets, but a few quotes from Baltimore Orioles Director of Player Development Matt Blood just before the start of the season raised a few eyebrows.

From MLB Pipeline’s minor league spring training report, “Ortiz has gotten stronger, the bat has gotten louder,” Blood said. “He’s always been a really good defender, he’s a true shortstop. Now he’s added more noise to his offense. That’s elevated him to another level. I think he’s an every day Major League middle infielder. He’s a good baseball player who could do all the things before but the bat was light. The bat is no longer light. That completely changes his profile.”

No more light bat, indeed. Ortiz started the season with High-A Aberdeen, hitting .289 with seven doubles, two triples, and a 139 wRC+, a notable improvement from his 2019 numbers. He showed enough in his 19 games to earn himself a promotion to Double-A Bowie this past weekend. He has also now cracked the the Orioles Top 30 prospects list on MLB Pipeline, sitting at number 30.

Like I mentioned last week when talking about Bowie’s pitching staff and the dominance that is going on there, my excitement for RHP Kyle Bradish is pretty high right now after watching him pitch and seeing his promotion after just three starts, in an organization that has been adamant about not promoting prospects until they have nothing more to prove at their current level.

The promotion of Ortiz wasn’t just to fill a hole in Bowie’s roster and to do it after 19 games in High-A after posting a .612 OPS in 2019? I’m highly intrigued. The story of Ortiz becomes even more intriguing knowing that his 2020 quarantine consisted of just a tee and a net, as he told MASN’s Paul Mancano back in January. No live pitching, no workouts at fancy labs, just old school training with a tee and a dream.

We don’t get the luxury of watching Aberdeen home games on MiLB TV (or really any coverage of this team through radio/social media), so when their select road games are on TV, my main focus has been on their pitching staff, with Grayson Rodriguez (now with Bowie), Garrett Stallings, Kyle Brnovich, Drew Rom, and Blaine Knight (also in Bowie) all pitching very well this season. Ortiz wasn’t someone I paid as much attention to as I wanted, so I made sure to watch closely on Sunday, his first action with the Bowie Baysox.

Joey Ortiz did not disappoint. After Michael Baumann allowed a first-pitch double to Victor Robles (on a rehab assignment), Ortiz collected two ground balls and recorded two quick outs to give him an early taste of playing shortstop at the Double-A level. The first play was the most telling, as Ortiz bobbled the transfer, but remained calm and made a strong, accurate throw to get the runner at first.

Just a couple of innings later, he showcased his range, glove, and arm all in one very smooth play.

Ortiz played second base for game two of Sunday’s doubleheader, where showed off more of his range on defense.

Playing in just his second game at the Double-A level, and first at second base, Ortiz could have backed off and let one of the two veterans in Robert Neustrom or JC Escarra, two good defenders in their own right, make the play, but Ortiz took charge and made the play himself without hesitation.

At the plate, Ortiz went 2-6 with a double and two walks across both games, making it an all around solid AA debut for the 22-year-old. He flashed his patience at the plate that he showed off in 2019, worked a few deep counts, and showed a very relaxed approach at the plate for someone making what is arguably the biggest jump in the minor leagues.

The possible emergence of Joey Ortiz as a legitimate prospect is pretty exciting. This is the depth you want to see in this organization and the growth you want to see from players while working with this player development staff in place. There’s no need to worry about how you fit in Ortiz, Henderson, Westburg, Vavra, and hopefully a Coby Mayo all onto the same field right now, and if a Brady House or one of these high-profile high school shortstops is available at five in this year’s draft, you take him and add him to the mix as well. This is how the Orioles emerge from this rebuild on top.

Find me another 30th-ranked prospect on another team’s list who is being talked about like Joey Ortiz and being described as an “everyday Major League shortstop”. I’m genuinely curious if there is anyone else, as watching four levels of Orioles affiliates most nights doesn’t leave a lot of time to watch more minor league baseball, as much as I would love to.

Get out to Bowie and get a glimpse of Joey Ortiz yourself. I promise you won’t be disappointed.