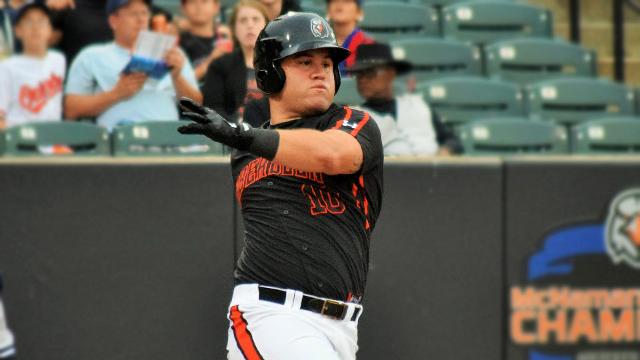 With the “break-camp” rosters set and games just about to start, Zach Spedden and I wanted to take time to review players to keep an eye on this season, be it good or bad. Most of the players have been covered at BSL via player reports or general articles.

Adrian Marin, SS – Bowie Baysox (AA)
2016 is an important one for the young shortstop. After several seasons of lackluster offensive performance, Double-A will be a true test for the young hitter. Hitting just .235/.279/.342 in Frederick over the past two seasons, I want to see Marin show why the Orioles drafted him in the third round. I still don’t believe shortstop is in his long term future, but at 22 years old, there is still time for a position change. Although scouts will point to his age and give him a free pass, it’s time the Orioles see what they have with the young infielder.

Hunter Harvey, SP – Frederick Keys (A+)
Harvey is a household name for any Orioles fan. However, due to injuries, his stock has taken a hit. After fracturing his fibula during Spring Training in 2015, and then was shut down with elbow discomfort, Harvey has pitched in a real game since 2014. Alas, Harvey will start the 2016 season in Extended Spring Training, but should be in the Carolina League by mid April after suffering a groin injury during a minor league game at the end of March.

When healthy, Harvey can be in the upper-90s with his fastball and has an above-average curveball that can get most hitters out. For 2016, the hope is that the 21-year-old righty can continue to develop his change-up and stay away from the injury bug that follows Baltimore’s top pitching prospects around.

David Hess, RHP – Bowie Baysox
David Hess took a huge leap in 2015 – starting right after the All-Star break while with the Frederick Keys. After his promotion to Bowie, Hess showed very little signs of slowing down, helping lead the team to an Eastern League Championship. I have Hess ranked fairly high as far as pitching prospects go within the organization and a full season at Bowie will only grow his ceiling. Fans could see Hess on the same path as current Oriole Mike Wright.

With just two regular season starts under his belt in Bowie, expect Hess to continue to develop his secondary pitchers, with an emphasis on the change-up. One thing Hess worked on last year was mixing pitches during at-bats when the hitter had a favorable count. In order for him to continue to move up, this will be a big factor.

D.J. Stewart, OF – Delmarva Shorebirds (A)
The early returns for Stewart last season were discouraging, as he hit just .218/.288/.345 after being selected in the first round out of Florida State University. While it would be easy to write him off because of that performance, there are reasons for optimism.

For starters, the Orioles have tweaked his stance, as Stewart has ditched his former crouched approach in favor of a more upright stance. That adjustment should allow him to see the ball more clearly, and create a more level swing that maximizes his bat speed. Another factor that could help Stewart is his move to the South Atlantic League, which tends to be hitter-friendly than the other circuits in the farm system. While Arthur W. Purdue Stadium, his home park, is not the best ballpark for home runs, its short dimensions down the lines and spacious power alleys could give Stewart a chance to boost his extra-base hit totals. It’s worth noting that Stewart had a .501 OPS is 31 home games last summer, compared to a .757 mark in an equal number of road contests, so perhaps he never quite adjusted to Ripken Stadium.

Chris Lee, LHP – Bowie Baysox
Lee may seem like an odd choice, given that last year was, in many ways, a breakout season. After all, the left-hander went from being a relative unknown to becoming one of the system’s top prospects after posting a 3.29 ERA over 145 innings pitched among three levels.

Though that was good enough to earn Lee a spot on the O’s 40-man roster, it’s easy to see where he could be even better in 2016. A major point of focus for him this season will be improving his control, and mixing in more change-ups. Given that his fastball routinely hits the mid-to-upper 90’s, Lee profiles as a big leaguer, but the ability to hone the rest of repertoire will be the difference between him making it as a starter or a reliever. As he returns to Bowie, look for Lee to make adjustments in these areas, and to perhaps reach Baltimore by September.

Jon Keller, RHP – Bowie Baysox
Listed at 6’5,” 210 lbs., Keller stands out as one of the most intriguing relief prospects in the system. His three-pitch offering is highlighted by a fastball that runs in the mid-90’s, which he combines with a slider and a change-up.

His control leaves something to be desired but, like Lee, it is easy to see where a return to Bowie will help him to make those adjustments. If Keller is able to refine his offerings and develop a more consistent delivery, he might emerge as one of the system’s best late-inning relief prospects.

Reggie Yinger has spent the parts of five seasons as a Player Development Coordinator for the Baltimore Orioles. He has extensive experience in computer programming and baseball.