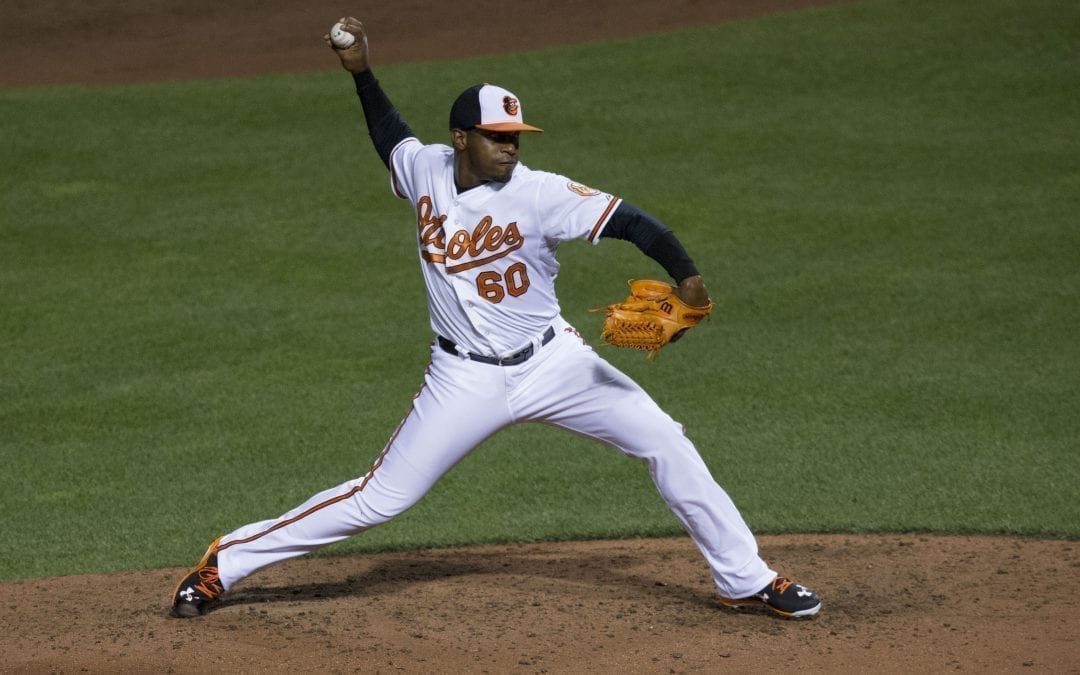 Right-handed pitcher Mychal Givens figures to play an important role for the Orioles in 2016 and beyond. After giving up hitting and focusing solely on pitching in 2013, Givens has provided a huge boost for a very good Baltimore bullpen.

If you happened to catch him pitch in the minor leagues, you knew the Orioles had a special reliever that could help at the big-league level. Offering a fastball (95-98 mph), a slider (83-85 mph) and a change-up (84-86 mph) while throwing from a low arm slot.

How is Mychal Givens attacking hitters? Below is a breakdown of his pitches and percentages:

Mostly with fastballs and sliders – mixing in the occasional change-up.

Below is a zone break-down for all pitches against RHH and LHH:

Once the ball leaves his hand, he’s primarily a swing-and-miss pitcher – in addition to generating ground balls. For strikeout percentage, he struck out 32.5% of all hitters faced in 2015 and generated a ground-ball percentage of 39.4%. Givens only appeared in 30 innings at the big-league level, but his 32.5% strike-out rate ranked him the the 14th best pitcher among all MLB pitchers in 2015 (min. 30 innings).

Primarily using his change-up against left-handed hitters, the pitch has serious fade away from the hitter, dropping out of the zone. In fact, his change-up generates a swing and miss percentage of 17% against lefties (20% to both RHH and LHH).

Additionally, Givens doesn’t allow home runs or walks – which is not only important for all pitchers, but especially those in high-leverage situations. The walks were a concern early on during the transition period from hitter to pitcher in the minor leagues, but have since been improved due to mechanical fixes.

Overall, Givens provides a nice segue to the later inning guys like Darren O’ Day and Zach Britton. With the starting rotation projected to be one of the worst in the American League, the quicker they can get to the bullpen in the sixth inning, the better off they will be, as the Orioles have one of the best bullpens in the game.

Reggie Yinger has spent the parts of five seasons as a Player Development Coordinator for the Baltimore Orioles. He has extensive experience in computer programming and baseball.