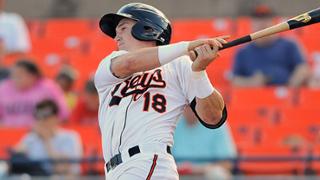 Now that we’re well into June, the way the Orioles prospects are performing are no longer just streaks or a bad start or two, there is a body of work that can be evaluated. Every season, prospects surprise and disappoint and it has been no different in the O’s farm system. There have been some outstanding performances during the first few months of the minor league season, and some that well…leave you scratching your head. Let’s dive into six prospects that have seen their stock either rise or fall given their performances this spring.

The Orioles 2016 third round pick out of Jacksonville University impressed in Aberdeen last season and has now pushed his way to Double-A thanks to his tremendous play with the Frederick Keys. At 22 years old, Hays is a college outfielder that came ready to compete with lower level minor league talent. He’s got a muscular build and above-average athleticism that flashes when he’s on the field. He can hit for average, power, steal some bases and play all three outfield positions if he needs to. In Frederick, the right-handed hitter finished with a .328 average, 15 doubles and 16 long balls in just 64 games with the Orioles High-A affiliate. Now he swings with a lot of effort, which lead to strikeouts and a few boneheaded plays. But, Hays is an all around ballplayer who can do a little bit of everything, and he has been the breakout star of the Orioles farm system in 2017 thus far.

Signed as an amateur free agent out of Australia, the 20 year-old has not seemed to be challenged in the minors over the past year and a half. Like Hays, Wells was clearly above the competition in short season ball with Aberdeen IronBirds in 2016. Now this season, he’s brought that same kind of dominance to the Delmarva Shorebirds in the South Atlantic League. Wells currently has an ERA just below 3.00 in 13 starts this season. However, the left hander doesn’t have overpowering stuff. He fastball sits at 87-88 mph and doesn’t rack up the number of strikeouts you would expect given how good he has been as an O’s prospect (he only has 53 K’s in 70 innings). What Wells does do is control the strike zone and work the corners with his entire arsenal. Wells command is advanced given his age, and he works the corners with a curveball that can play as a potential average offering at the major league level. He also brings to the table a changeup that he frequently places low in the zone. Wells is a pitchability guy that will limit the mistakes and not hurt himself on the mound. He only has allowed 9 BB’s almost three months into the season. He won’t blow fastballs by you, but he’s an advanced starter for his age and should make his way up to High-A at some point this season. He’s been a certain bright spot for an organization that struggles producing quality starting pitchers.

Though there are some other more high profile players that could be highlighted, I really like what I see from the O’s former 13th round selection in 2015. Coming off spring training where he caught Buck’s eye, Mullins has continued that momentum in Double-A this season. Mullins is a smaller guy, listed at 5’8’’, 175 lbs. However, don’t let his size fool you, the center fielder packs a punch with the bat. Mullins hits for more power than you would think because of how he uses his entire body at the plate. He turns on velocity well, and should rack up the doubles in the years to come. Numbers have backed up these tools, as he’s hit for a batting average over .300, while collecting 7 homers as well. While his offensive game is nice, Mullins standout tool is without a doubt his speed. This guy can fly around the bases, and will make pitchers cringe in frustration in his ability to produce those infield singles. He’s stolen just five bases in 29 games this season, but he’ll start to get things going again now that he’s back from his hamstring injury. Mullins isn’t a surefire starter at the next level, but think of him as a more powerful Joey Rickard, who’s probably a bit faster than the current Orioles outfielder.

As the Orioles first round pick just a year ago, people expect a lot out of Sedlock. He showed relatively well in Aberdeen in 2016, but the right hander’s true first test would be in the rotation for the Frederick Keys in his first full season.  It’s fair to say that the 22 year-old has experienced some difficulties at High-A ball. So far, Sedlock’s ERA is north of 6.00, with his K-BB ratio at a concerning 2-1. That’s not what the O’s expected him when they made him their first selection last June. After watching Sedlock this season, it’s clear that he has a few issues in his mechanics that need to be worked out. He has excess movement in his delivery and doesn’t seem to be holding his fastball late into his starts. Coming into the organization, Sedlock was throwing a 94-95 mph sinker. Now that pitched has ticked down to 90-91. Perhaps it’s just that Sedlock isn’t used to throwing this much or often as he was only a starter one year at Illinois. He’s struggled with his command this season as well, frequently missing his spots all around the zone during the two times I saw him. There’s no doubt that Sedlock has the talent it be a starting pitcher. He’s got a mature frame that looks like it should hold up, and uses a sinker that is very tough to drive in the air when Sedlock is on his game. We’ll have to see if the high draft pick makes any adjustments in the second half of the season given his struggles, but he’s certainly not going to be up to the big leagues quick because of this blip in the road.

The first Triple-A player mentioned, Lee was expected to be a potential rotation option down the road this season. However, his play has eliminated him from that conversation right now, even with the Birds’ current starting pitching situation. The 24 year-old left hander was originally acquired from the Astros for some international bonus slots prior to last season, immediately vaulting him to becoming one of the better pitching prospects in a rather barren Orioles farm system.  Lee definitely has the profile that will intrigue you a little bit. His fastball can touch the mid-90’s, although he’s more comfortable sitting 89-91 mph, in addition to a potential swing and miss slider and playable changeup. His ability to throw strikes is in question, as you can see by his over 4.0 BB/9 IP in Norfolk. This has led to an ERA that sits in the high 5.00’s. It’s also concerning that Lee’s strikeout numbers are not so good. If you can’t throw strikes and can’t get hitters to swing and miss, how can you be effective? There’s reason to believe that Lee profiles better in the bullpen, but he’ll continue to get the opportunity as long as the Orioles lack close to the majors arms in their system.

Peralta has always intrigued me because of his youth and plus fastball velocity. At 6’5’’, 195 lbs. the 20 year-old from the Dominican Republican has some upside and projection to him that makes you at least a little excited about what he can eventually become. But, Peralta has taken a big step back with the Frederick Keys this season. While he’s still striking out over one batter per inning pitched, Peralta has struggled mightily in throwing strikes. He also lacks a quality third offering, which he needs to develop if he wants to stick in the rotation moving forward.  Peralta has some tools, but there is a reason that he has regressed, which is because he’s facing better talent and they can take advantage of Peralta’s weaknesses over the course of a start. I’m still high on Peralta because of his arm talent, and he will make an above-average reliever if he does make that switch in the near future. But if he wants to become a reasonable starting option for the O’s, he needs to tighten up his mechanics and focus on further developing his secondary stuff outside that mid-high 90’s heater.

Greg Goldstein is a scout/contributor covering the Eastern, Carolina, South Atlantic and NY Penn Leagues for Baseball Prospectus. Greg also is a contributor for the FanSided general baseball blog, Call to the Pen. Having graduated from the University of Maryland, College Park in May of 2017 with a Bachelor’s degree in Communications, Greg was a beat reporter for the SB Nation blog, Testudo Times, covering the Maryland baseball team during their 2017 season.