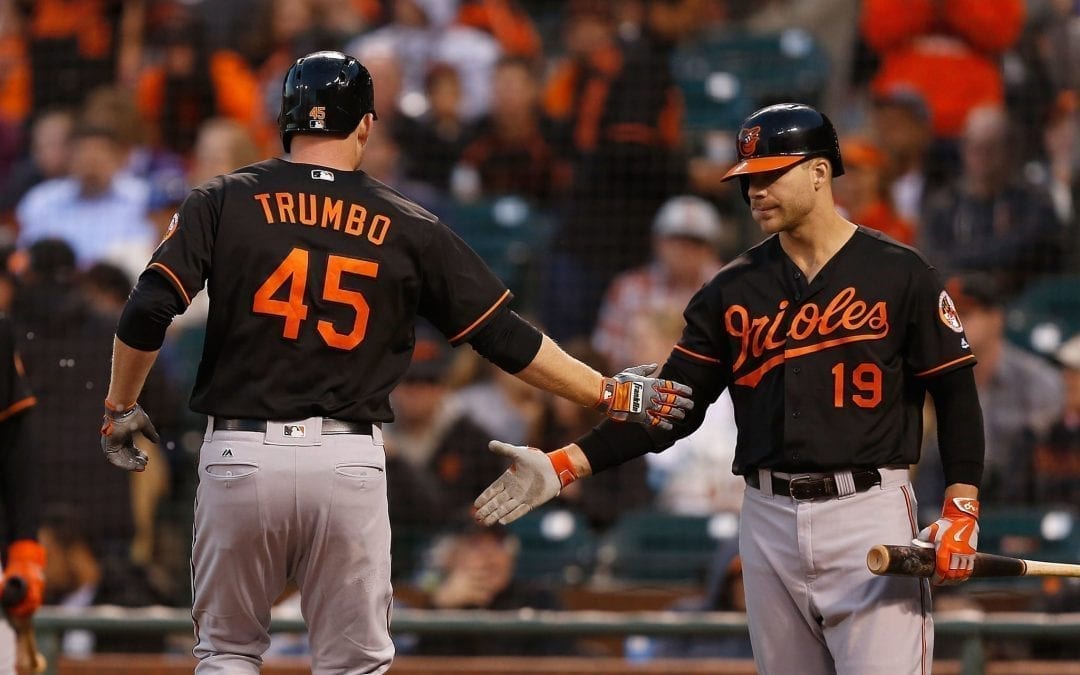 Mark Trumbo is progressing in his rehab, and apparently moving closer to rejoining the Baltimore Orioles.

(Not a slap at Martin, who is progressing as a hitter. Just perspective that the Rule 5 player, who had never played above AA before this year, and was completely overwhelmed to start the year has a higher OPS at this point.)

There is no reason to spend an inordinate amount of time on either. Trumbo’s numbers vs. RHP the last 3 years (’16-’18) are solid. If a team needs help at DH or 1st, and doesn’t have to play him in RF; he can probably help. ’16 was a career year for Trumbo. ’17 was a career worst. ’18 was at his career averages.

After his 0 for to start the year (actually carried over from the end of ’18); Davis rebounded with some good ab’s. He worked his OPS up to a season high .666 on May 12th.  Since then, he has 5 hits in 48 ab’s, with only 2 doubles, and no homers. In that stretch he has 30 k’s vs. just 2 bb’s. Maybe this slump was driven by the hip inflammation and then off-timing after his return from the IL.  Either way, his overall numbers are brutal.

Trumbo’s contract is over at the end of 2019. If the O’s bring him back, and he shows anything, they can probably move him for some very minimal return – if they eat at-least a portion of the remainder of his contract.

Davis is under contract through 2022 ($17M per year), and will be getting an additional $42M in deffered payments through 2037.

My thought is that it’s time to pull the plug on both, and neither need to play another game in an Orioles uniform. Even if Trumbo looks solid in his return, and the O’s pay full freight on his contract; I don’t think there is much reason to believe he brings back anything of value.

At some-point the Orioles are going to part with Davis. They are going to eat that contract. If being out from that contract clears his mind, and he goes on to look like a facsimile of his old self somewhere else… that’s just the way it goes.

Nunez entered the year with arm trouble, and that coupled with Rio Ruiz’s excellent defense at 3rd means Nunez has to get his ab’s at DH.

DJ Stewart is on the 10 Day IL with his injured ankle, but he’ll be back soon. He needs to play.

Dwight Smith Jr is on the 7 Day Concussion list, but he’ll be back soon. He needs to play.

Davis and Trumbo on the roster – even if it’s just the next 4 to 6 weeks – would just complicate things.

Trey Mancini’s future in the Majors is ideally going to be at either 1st or DH. In the OF he hustles, and his arm is better than you’d expect; but he has poor range. At 1st, he looks like he belongs.

Ryan Mountcastle has cooled off a little at AAA (he’s 11 for his last 46, a .239 baa); but he has a .865 OPS overall. The O’s might want to see him close his walk-to-k ratio (7 to 56), and they might not be excited about starting his service clock now…. but he’s very close to ML ready at this point. Since they have moved him to 1st, there isn’t going to be much focus on his glove. It’s now solely about his bat, and it’s going to be hard to argue he needs a lot more work there.

Austin Hays is clearly being positioned to take over CF in Baltimore shortly. Him being moved off a corner OF position (if he shows he can handle CF in the Majors) alleviates some of the O’s future Corner OF / 1st / DH log-jam.

So far, ’19 has not gone according to plan for Yusniel Diaz. He had a slow start, followed by an extended IL trip, and has only gotten back playing recently. After 6 games in Frederick, he’s back at Bowie. My expectation is that he’s going to earn his way to the Majors and take over RF by this time next year. When that happens, that may* force other decisions.

*The decision I’m specifically thinking about here is what happens with Smith and Stewart, but may is the optimal word. Smith is on-pace for 59 xbh’s, and 102 RBI, but we don’t definitively know what he is. He might continue to hit the rest of this year, and make you feel he’s now part of the Orioles plans going forward. He might fizzle out (.238 baa in May, 3 for 19 in June) and be mostly an afterthought by October.  Same thing for Stewart in general terms. The development was a bit slow, but he produced in the Majors last year in that limited sample, and earned his way back to the Majors this year after doing work at AAA.  Like Smith, he’s a former 1st rounder, that maybe becomes a piece for you going forward. He’s going to determine that by his production, and consistency in the opportunities he gets the remainder of ’19 and into ’20.

If you wanted, you could also include Mullins into this conversation. Mullins had a poor 64 ab’s with the Orioles, and then has compounded the negative vibes with his rough 166 ab’s with AAA Norfolk. Still, it’s possible he could rebound, and get himself into the LF discussion for ’20. He’d have to be a strong on-base guy, with plus range (making up for his mediocre to below-average arm, and mediocre pop); but it’s plausible.

So, if you were to cut-bait with Davis and Trumbo now, for the remainder of ’19 you are looking at something like:

You have to let the on-field results dictate what happens next. Maybe Nunez is able to move back to 3rd in ’20? Maybe Ruiz (who has a lot of good ab’s), winds-up hitting enough, that when combined with his glove – has locked down 3rd going into the off-season? We’ll see.

We also don’t know if over the next Month some team out there is going to make an offer the Orioles can’t refuse on Mancini. Probably not going to happen, but it could.

By this time next year, I expect we’re looking at something like:

You’ve got some flexibility there with your existing internal options. Let the production of those players dictate the utilization.

The remainder of ’19, and ’20 is largely going to be about further evaluation of what you have. Hanging on to Davis and Trumbo any further will just impact that evaluation. Thank them for their prior contributions, and move on.