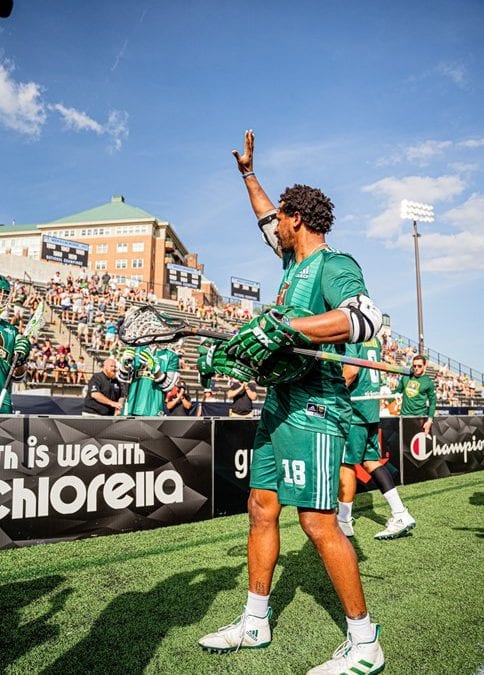 After a week off, the PLL was back in action this weekend at Homewood Field on the campus of Johns’ Hopkins University. They played another five games, beginning Friday night with the Whipsnakes vs Atlas. Both teams who played Friday night suited up again on Sunday, one thing that proves to be an advantage for their opponent in the Sunday afternoon game. Plenty of hometown kids were in action in plenty of games throughout the weekend, beginning on Friday night.

The Whipsnakes came into the game on one of the longest winning streaks in professional lacrosse history, and they were tested throughout this one by the Atlas, who have been playing better after a tough weekend in Boston. The #1 pick in this year’s College Draft, Jeff Teat, made his debut and disappointed quite a bit as he only had two assists but five turnovers. Jake Carraway’s five points (St. Mary’s) and Bryan Costabile’s three (Mt. St. Joe’s) led the way for the Atlas who had the Whipsnakes on the edge all game.

The Atlas led 8-5 after the first half but had a 15+ minute scoring drought in the second half that allowed the 2x defending champions get back into the game. The Whipsnakes held a late lead before Mark Cockerton pulled out a dangle and tied it late. The 2019 MVP Matt Rambo found himself one on one in overtime and dodged to his strong left hand to end it and move the Whipsnakes winning streak to 11.

Kyle Harrison’s retirement tour continued on Saturday afternoon with his last ever game on Homewood field as his Redwoods had two scoreless quarters including getting outscored 4-0 in the fourth to allow the Chaos to get their first win of the season. This was another back and forth game and both teams had seven different goal scorers on the afternoon. The difference was Chaos goalie Blaze Riorden who piled up 14 saves on a 61 save percentage to lead his team to their first win. Despite rookie TD Ierlan winning 77% of his faceoffs, the Redwoods were unable to capitalize on their 39 shots, only scoring nine and having their potential game tying two pointer blocked by Mark Glicini to end the game.

Harrison finished the game 0/3 shooting but had family and friends from the area there to support him in his last game on Homewood. After starting 2-0 the Redwoods have quickly fallen to 2-2 which might put them in a must win situation next weekend against the Waterdogs.

After a 2-0 weekend in Atlanta, the Waterdogs fell again against the PLL’s best team at the moment, the Archers. Sitting at a +25 scoring differential after three games, the Archers seem to be unstoppable so far this season, as they won in dominant fashion, 17-8 in a chippy contest. The Archers took a 9-3 lead midway through the second quarter and didn’t look back, which led to some frustration being let out by the Waterdogs. A couple of scuffles broke out during the game which I think was part of the reason the Archers run it up. Archers goalie Adam Ghitelman scored an empty net two pointer at the end of regulation that ran it up from 15-8 to 17-8 and in a league that’s tiebreaker is based on scoring differential, it was a pretty smart move.

In the weekend’s highest scoring contest, the Atlas and Cannons went back and forth scoring 35 goals on the afternoon, but the Cannons were never able to claw out of the early hole they were put in. Jeff Teat was sensational on the afternoon, showing the league why he was drafted #1 overall this past spring. Teat had seven goals and two assists on the afternoon and was helped out on the defensive end by Michael Rexrode, who held Lyle Thompson to only two assists. Since their opening beatdown at the hands of the Archers, the Atlas have been playing some good ball.

And down go the Whipsnakes, ending their 11 game win streak and 687 consecutive calendar days in which they had not lost. It comes at the hands of the a winless Chrome team, showing just how deep this league really is. Without leading scorer and reigning MVP Zed Williams (injury) and with the 2019 MVP Matt Rambo sporting a banged up wrist throughout the game, the Whipsnakes didn’t have much offensively only scoring 6 goals and 2 in the first half mostly due to the play of Chrome goalie John Galloway who had 12 saves in the first half and 21 overall on the afternoon. Running into a hot goalie is due to happen but the Whipsnakes need to get healthy ahead of a big game with the first place Archers.

There has been a lot of movement throughout the league as the standings have changed drastically in the past couple of weeks. There are two weeks until a pretty big hiatus for the league, as the All-Star Weekend is slated for July 18th in San Jose followed by a bye week. The top-seven seeds are still all up for grabs so look for plenty of teams to race to secure a better spot in the top-seven heading into the two-week All-Star break.