PLL: Week 1 Storylines, What to Look for in Week 2 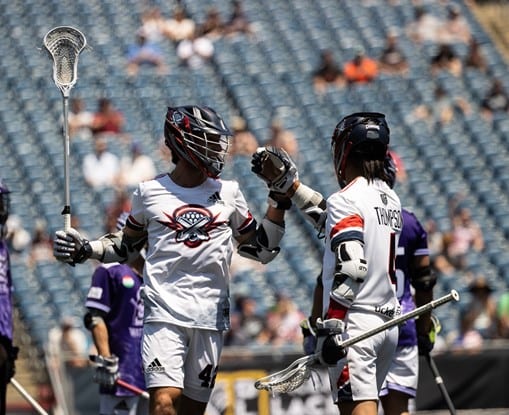 The PLL was back in Boston this past weekend, playing games at Gillette Stadium, home of the Patriots for their biggest weekend EVER. They have never before played five games in a weekend and with the addition of the Cannons will be able to produce their biggest year ever this summer in 2021. Eight teams, the Atlas, Archers, Cannons, Chaos, Chrome, Redwoods, Waterdogs and Whipsnakes will battle it out all summer on the networks of Peacock, NBCSN and NBC to see who will take home the crown.

All in all, the PLL being back in Boston was great for lacrosse. After year two playing strictly in Utah for only a few weeks, it was awesome to see lacrosse back in a big stadium in front of fans. In the early years of the league, I think the touring model is great. Especially for a sport that is still just scratching the surface of fandom in the US. Yes, many will say that the PLL is biased to lacrosse’s roots on the East Coast and part of that I would have to agree with. You have to make stops in the cities that will draw the most attendance (DC, Baltimore, Philly, Long Island, Boston, Albany). But the non-conventional cities like Atlanta, Salt Lake City and San Jose are phenomenal places to host five professional lacrosse games. Not to mention the two newcomer cities to the PLL tour in Minneapolis and Colorado Springs. Both will be great places to continue to grow the game and should have a great turnout in terms of fans in the stands.

After one week of games there surprisingly weren’t many competitive ones. The weekend was bookended by the most exciting games of the weekend being both Redwoods games, both of which they won.

In the first game of the weekend the Redwoods got off to their notorious slow start against a Cannons team that is boasting some old stars in Lyle Thompson, Paul Rabil and Brodie Merrill. The Redwoods ended up coming back from a 3-0 deficit and at the end of the day was able to put together a better fourth quarter to pull out the season opening win. In two wins, the Redwoods outscored their opponent by only four goals, which should be a big storyline moving forward as scoring differential is the main tiebreaker used for playoff seeding.

In their second game against Chrome, Redwoods also started slow, trailing 3-0 before outscoring the Chrome 10-3 in the 2nd and 3rd quarters. The Redwoods roster only improved in a big offseason of changes as they were able to snag TD Ierlan (65% FO on the weekend), Rob Panell from the Atlas, Isaiah Davis-Allen and Ryan Lee from the MLL. A 2-0 start despite any scoring differential is a huge bump in the standings and the Redwoods are sitting pretty at the start. The Chrome unfortunately lost Jordan Wolf in the game due to injury, it looked like he sustained a pretty bad hamstring/lower body injury and will miss some time.

Both Saturday evening games were pretty lopsided as the Whipsnakes beat down on Chaos 13-7 and Archers destroyed Atlas 18-6. Despite the score, the 2x defending champs had a beatdown on Saturday afternoon as they led the Chaos 13-3 after three quarters behind huge games out of the two that led them down the stretch last postseason Zed Williams (4g) and Joe Nardella (73% FO). This game could have been even more lopsided as Chaos goalie Blaze Riorden saved 19 shots to keep it respectable. But the preseason favorite to win it all once again Whipsnakes loaded up this offseason in the college draft with Ryan Tierney (Hofstra) and Connor Kirst (Rutgers) and look even more dangerous in 2021.

The Archers on the other hand didn’t lose their veteran core of Marcus Holman, Will Manny and Adam Ghitelman while they added a big name in Connor Fields who contributed a 2 pointer and an assist and Ryan McNamara (3g) from the MLL. Ten different players registered a goal Saturday evening, and they steamrolled the Atlas 18-6

Michael Sowers took a nasty hit late in the third quarter from Jackson Place to the tune of scoring his first PLL goal and getting his helmet knocked off in the process. It was tough sledding for the #1 overall pick as he had a few goals called back from being in the crease and took a shot to the head to get his first one to go. Jackson Place received a fine for the hit and Michael Sowers will not play this coming weekend.

The Cannons got their first ever PLL win taking down the inefficient Waterdogs 13-7 on Sunday. Shooting 7/34 and only 18%, the Waterdogs couldn’t get their shots to go and ran into a hot goalie in Nick Marrocco (11 saves). The Cannons on the other hand are playing very well and are getting good contributions from plenty of PLL newcomers (Lyle Thompson, Andrew Kew and Stephen Rehfuss). Just a year removed from shooting 5% and 1-19, scoring one goal and adding four assists in 5 games for the Atlas, Paul Rabil seems to have found his stroke, and in just 2 games so far this season has 5 goals and an assist. The Cannons have a big weekend ahead of them.

The PLL heads to Atlanta for Week 2 of action and another five games, beginning tonight at 7pm when the Sowersless Waterdogs take on the Chaos. The Chaos (more specifically Austin Staats) has been in the news due to an incident that occurred in the hotel this past weekend in Boston. Staats and Matt Gaudet (Chrome) allegedly got into an altercation that ended with Staats biting a piece of Gaudet’s finger off. VIEWER DISCRETION ADVISED the following twitter thread contains a graphic scene.

Anyways, the Waterdogs will look to be more efficient this weekend against the Chaos and get their first win of 2021. Without Michael Sowers playing behind, look for them to be more midfield driven to get shooters like Ryan Brown and Kieran McCardle open for shots.

Former Super Bowl Champion Chris Hogan will make his PLL debut this weekend on NBC when the Cannons take on 2x defending champion Whipsnakes. This should draw many eyes to professional lacrosse and will be a great game for first timers to watch Saturday afternoon. Expect Hogan to get some time playing defensive midfield guarding some of the best midfielders in the world. The Cannons will have to get out to a fast start and play with the Whipsnakes early who are great on the offensive end. Lyle Thompson against Matt Dunn will be a great matchup to watch in this game.

To replace Matt Gaudet (suspended) and Jordan Wolf (injured), the Chrome have added former D3 player Kevin Rogers (Lynchburg) and Tommy Palasek from the player pool. It isn’t ideal to lose one of your best offensive weapons in game one but look for the Chrome to continue to attack out of their midfield with Jordan McIntosh and John Ranagan.

After getting out to a season opening 18-6 win in a very balanced effort, the Archers will play Chaos on Sunday afternoon in the Chaos’ second game of the afternoon. Stephen Kelly and Thomas Kelly will battle it out at the faceoff x which should be a big part of determining who has the leg up in this game.

In an eight week season, it is very important to start strong, something the Redwoods, Whipsnakes and Archers have already done. I am looking for these three to continue that trend and one more team to round it out and make it four. Waterdogs and Chaos have a great chance to do so, playing two games this weekend. The next time the PLL plays it will be at Homewood Field on the campus of Johns’ Hopkins on June 25th. But for now, it is PLL Week 2 from Kennesaw State University in Atlanta.