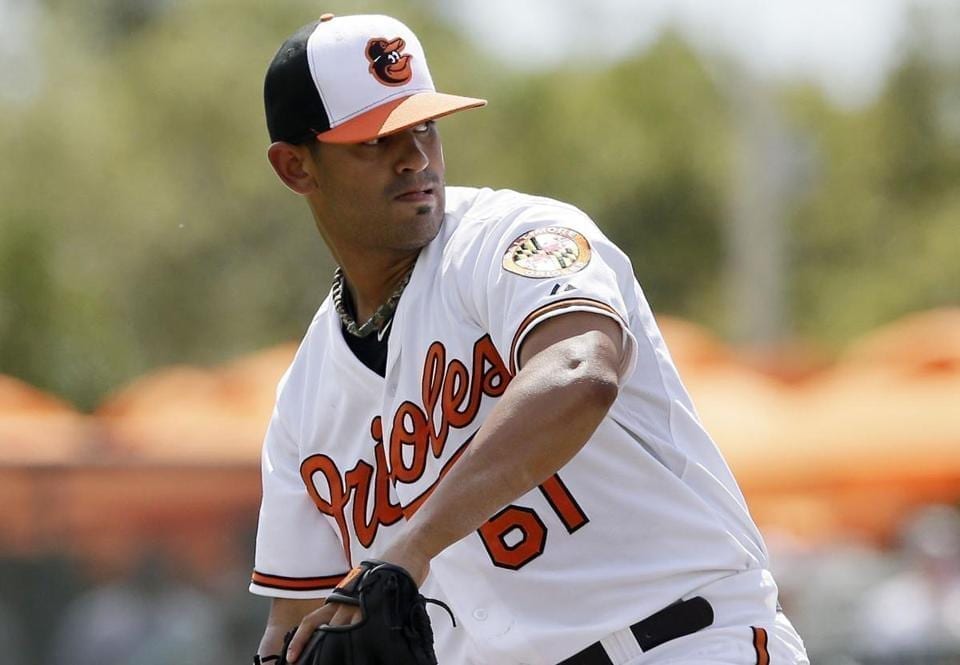 The Orioles are off to a 7-5 start and are currently tied with the Red Sox for first in the division. The difference between first and last is 1.5 games, so obviously things are tight early on.

The Orioles have had to juggle the roster some early on. They have had suspensions, poor play and injuries to deal with. All of those things have impacted the roster already. On top of those things, they also are dealing with the Garcia situation. For whatever reason, the Orioles value Garcia highly, or at least it appears. They essentially traded Webb and the 74th pick (awful move by the way) to keep him on the team (and save money of course). So, since you did that, can you really cut bait with him right now, even though you haven’t used him in 10 days and have only used him twice all year?

(Discuss this on the BSL Board here.)

What should this team do? After the horrendous ejection of Jimenez on Friday night and Tillman and Gonzalez both failing to get out of the 6th, the bullpen has been used a lot as of late. They are 5th in AL overall in terms of IP (teams ranked 4-7 are within 1.1IP of each other as I write this).

So, what can be done to help out the pen? To me, there are a few moves that should be made out there.

First of all, I send down Gausman. I think Gausman should be starting and although he looked good today, he hasn’t been that great in a very small sample size early on. So, I would send him down and allow him to start, build those innings up and continue to let him work on the things he needs to. In his place, I would bring up Mike Wright. Wright is destined for the pen (in all likelihood) long term. He has started off well and like Gausman, he can go multiple innings. He has a chance to have a big upside out of the bullpen as well, so I would feel pretty good with him out there. Now, I do admit that this is a move more about putting Gausman in the role I think he should be in and less about how much Wright can improve on what Gausman has done thus far. Wright also hasn’t pitched since the 15th, so he should be able to provide innings immediately.

I also think you have to cut bait with Garcia, if you are going to continue to not use him. There are several names you could bring up. Rowen (not on 40 man), Wilson, Gamboa and Tim Berry are some of the names to consider. Now, if Buck is willing to say (and more importantly, actually do it) that Garcia is a guy that he will use in any situation, so be it. But, why should we think he would do that? He didn’t even use him in an 8-3 game today, although he said he was “tempted”.

The next roster question will be, what do you when Hardy comes back? With the injury to Schoop, you need Flaherty and Cabrera on the roster. Thus far, Lough hasn’t been used in any role but late inning defensive replacement. It seems pretty obvious that Paredes and his bat are higher on the roster pecking order than Lough is right now. This team currently has 6 OFers (If you are ok with Young being called an OFer). With that being the case, I think all signs point to Lough being the odd man out. I don’t like it but again, with the way this off-season was handled, Duquette didn’t do a good job with the depth. Yes, there was a lot of depth but his inability to thin that out somewhat has already cost us Webb and a pick and it may cost a decent 4th/5th OFer as well. Now, maybe an injury will occur or they will be able to get Lough to the minors but however it’s done, I think it seems rather obvious that he is the odd man out.

The Orioles likely will have a decision to make with Wieters sometime over the next month but a lot can happen between now and then, so I am not focused too much on that right now.

The best case scenario for this team continues to be that they can make a few trades, get back something decent in return and be able to thin out this depth in a way that actually makes sense. I am sure Duquette is working on doing that. Whether that work ends up with a move that makes sense (unlike the Webb move), remains to be seen.