Previewing Ravens @ Titans: Inside the Numbers 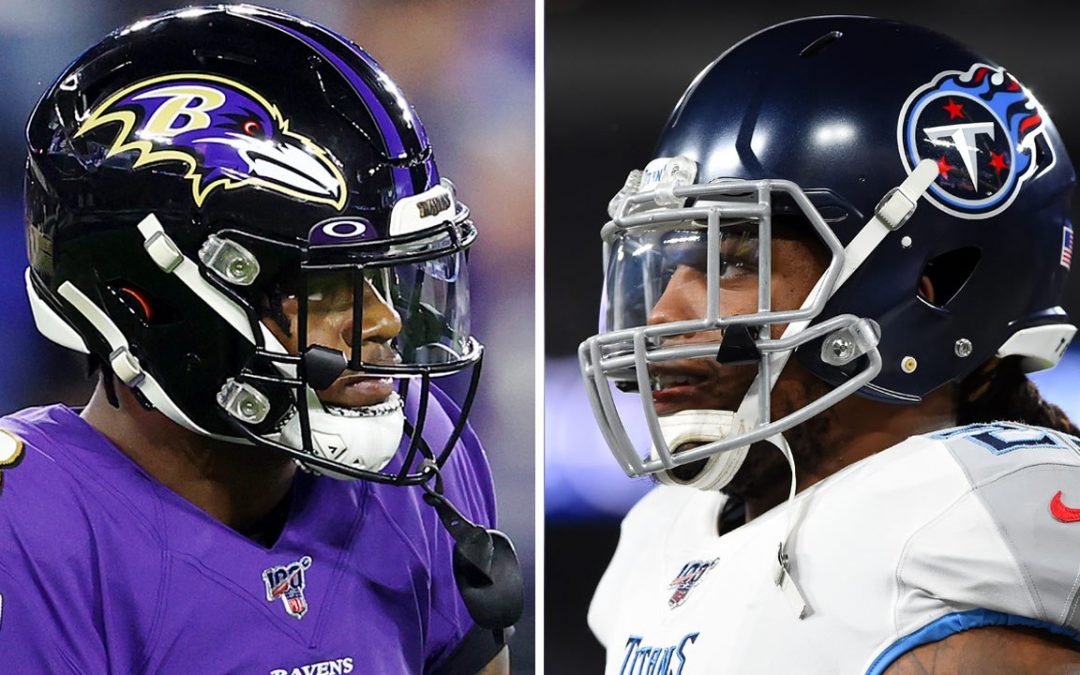 “Handling their business” has been a phrase I’ve used quite often during the last month or so when on paper, the Ravens schedule got easier. Beating teams, you should be beating is “handling your business”, and they continued to do that against the Bengals, to the tune of 38-3, to finish the regular season 11-5.

The Ravens enter this contest, winners of five straight games. Their last loss was part of a three-game skid that included a monsoon in New England, a late collapse with the game in hand versus Tennessee, and the JV squad playing the Steelers on a Wednesday, six days after it was originally scheduled, due to a large Coronavirus outbreak around the castle, landing over 20 guys on the COVID list.

Since then, the Ravens have only been challenged by Cleveland in a game that might go down as the game of the year given the offensive slugfest. A game that you can take a lot of positives from offensively, but also a lot of negatives defensively when you allow 42 points and a third, 4th quarter rally allowed this season to let a team back into the game you had in hand. Plenty of things you want to see cleaned up for this coming week in their first game that presents a challenge in nearly a month.

Last meeting between the Ravens and Titans.

Last time the Ravens met the Titans, the offense still hadn’t found its groove, and the Derrick Henry train rolled to victory on Baltimore’s turf for the second straight time. He rushed 28 times for 133 yards, including the game winning 29-yard TD run to win in OT, 30-24. The Titans are one of the worst defenses in the league, but the Ravens only earned 3.9 yards per carry on the ground, and 6.4 yards per attempt through the air in this contest. Gus Edwards only saw two carries, and Lamar Jackson posted a below average 39.4 QBR. The Ravens had a 21-10 lead in the 3rd quarter, a 21-13 4th quarter lead, and let it get away.

Let’s start with the teams overall. These sections are thanks to Football Outsiders and their DVOA metric, measuring each team play to a baseline league average.

Weighted DVOA, measuring the teams play by play performance with extra emphasis on the most recent games. Ravens – 7th 15.7%. Titans – 12th 4.3%. Suggests overall the Ravens are playing better than the Titans, right now.

Strength of schedule: Ravens – 29th. Titans – 26th.  Neither team was challenged much in the Regular season. The AFC North sent three teams to the playoffs. The Ravens, Browns (30th) and Steelers (31st) had the easiest schedules aside from the Colts (32nd). The AFC North played the NFC East this year where no team went .500, as well as the AFC South where like the Colts and Titans, the AFC North got to beat up on the Jags and Texans. Not to mention the bottom feeding Bengals in the mix.

Points per drive: Ravens Offense – 2.61. Defense – 1.75. Titans Offense – 2.98. Defense – 2.67. League Average – 2.27. Consider the fact that in the last meeting each team had 8 drives in the game that didn’t include overtime, or end of half kneel downs. Using the equation (Offense x Defense) / average, the Ravens would be predicted to score 3.07 points per drive in this game. Titans, 2.3 points per. Use 8 drives as a solid benchmark for two teams who run the ball a lot and keep the clock rolling, the predicted score here would-be Ravens 24.6 – Titans 18.4, or the Ravens considered about a six-point favorite. Going on the road, give three more points to the home Titans, closing that gap to about three points. As of this publishing, the Vegas line is Ravens -3.5. Pretty much spot on.

Now we’ll get a little more specific considering matchups and metrics provided by Pro Football Focus. No better place to start than the two quarterbacks.

The deep ball is back in play for the Ravens as Jackson has completed 7 of 14 passes over 20 yards, with one drop, in the last five games. Tannehill is 5 for 15 in that stretch. It’s taken Jackson a while to get there though as he is 18 for 52 on the season, compared to 18 for 39 for Tannehill. Just another example of the Titans playing well all year, and the Ravens getting hot in the stretch run.

Pressuring Tannehill will be key as he is 26th in completion percentage, and 21st in accuracy when pressured. Jackson is 6th and 11th respectively. Against no pressure, Tannehill is 10th and 13th in those metrics, while Jackson is 23rd and 24th.

Another key will be not letting Tannehill capitalize on play action. They use it the most in the league, on 36.4% of their passes. Tannehill throws for 9.7 Y/A in play action (3rd best). However, he only completes 60.4% of those passes (21st) compared to 68.3% of his non-play action throws. That’s the largest difference in the league.

Onto the receiving group. Starting with the Titans, it’s a two man show with Corey Davis and A.J. Brown. Whether looking season long, or last five games, they are among the best at yards per route run, one the best measures of receiving efficiency. Davis is at 2.79 (really good) and Brown at 3.06 (elite). That is all they have though. Eight other pass catchers on the Titans roster have been targeted a total of 49 times in the last five games. Brown and Davis. 74 times combined.

On the Ravens side, it’s a similar story. Mark Andrews and Marquise Brown see the large target share, picking up 2.74 (really good) and 2.01 (pretty good) YPRR. Six other receivers have picked up 26 combined targets in the last five games, while the duo of Andrews and Brown have seen 60 combined.

Titans top two receivers see a 60.2% target share. The Ravens top two, a 70% share. For both teams, they will want to sell out to not let the teams best threats beat you. Begging the question, who will step up? Last year, Tennessee jumped out early with a 12-yard touchdown to TE Jonnu Smith, and then a 45-yard bomb to Kalif Raymond. After a quick 14-0 lead, it was the Derrick Henry show from there on out as he threw a short TD to Corey Davis, and Tannehill punched one in after Henry did all the dirty work to get to the goal line.

For the Ravens, I’ll certainly be looking for Miles Boykin, or Dez Bryant to come up a with a couple key plays, and hope Jackson doesn’t force something to Andrews or Brown if it isn’t there. Or, let our ground game be the star of the show like it has been.

On that note, transitioning to the running game. Derrick Henry is clearly the biggest threat on the Titans offense. Over 2,000 yards on the season. The most broken or avoided tackles on the season. 2nd most yards after contact per attempt behind Nick Chubb, making him 2nd behind Chubb in PFF’s elusive rating as well.

Before I get to the Ravens running game, let me explain why the Titans present a tricky matchup for the Ravens.

A) Henry’s ability does not bode well for Patrick Queen who is second in the league in missed tackles among linebackers with 12.

B) It is imperative that the Ravens run stoppers set the edge to slow him down outside the tackles. Pernell McPhee, Jaylon Ferguson, and Tyus Bowser have all done that extremely well, posting run stop numbers over the 10% mark, making them some of the best.

C) I expressed the importance of pressuring Tannehill, and it’s Matt Judon and Yannick Ngakoue on the field for that ability. Guys who don’t set the edge in the run game well.

What do you do? Which skill do you sacrifice? Down and distance will determine that, so you need to try to keep the Titans out of as many manageable down and distances as you can. Limit their playbook on 3rd downs.

Back to the Ravens run game. As J.K. Dobbins gets more run for Baltimore of late, he’s entering the top tier in these metrics too. He’s listed at 11th in broken or avoided tackles over the last five games, but when you watch the Ravens, so much of that is because he turns the corner so fast, there isn’t a tackle to avoid sometimes. He’s 4th in yards after contact per attempt, and 8th in elusive rating.

Where Dobbins speed around the edge gets accounted for is in PFF’s breakaway percentage. Seven of Dobbins’ 62 carries the last five games have gone for 15+ yards. Those seven runs, actually average 30.1 yards per carry. Of late, his breakaway% is best in the league. Henry not far behind in 4th.

If we change the qualifying parameters on PFF, Lamar Jackson is the league leader in breakaway%, While he, Dobbins, and Gus Edwards, all have higher percentages than Derrick Henry. Henry has 9 rushes of 15+ yards on 122 attempts in the last five games. The Ravens trio has 18 on 148 carries. If the Ravens can have twice as many big plays on the ground as the Titans, that would surely be deciding factor in the game.

Ravens key to the game.

After all of that breakdown, the main key for me is keeping the Titans out of as many manageable 3rd downs as you can. You don’t want to have to guess between the ball going to Henry, or the top receivers, Davis and Brown, on a 3rd and 1-5. You want to get off the field. Best way to do that? Keep them in 3rd and 6+, limit the playbook. How do you get there? Disguise the defensive fronts all day long. Eight guys on the line of scrimmage. Give Tannehill no idea who is rushing and who isn’t. The Ravens haven’t shown much of this lately because frankly, they haven’t needed to against some of the teams they’ve faced. Blitz often on first down. Try to pick up early sacks or stop Henry in backfield, bring up 2nd and 12-15. Screen passes are blitz beaters, but Henry is not a factor in the Titans passing attack. Takes your chances and bring the heat. A little more cushion to come up with a 3rd down and long where Henry isn’t a factor. You feel better about Judon and Ngakoue going out there and pressuring Tannehill, limiting the big play ability.