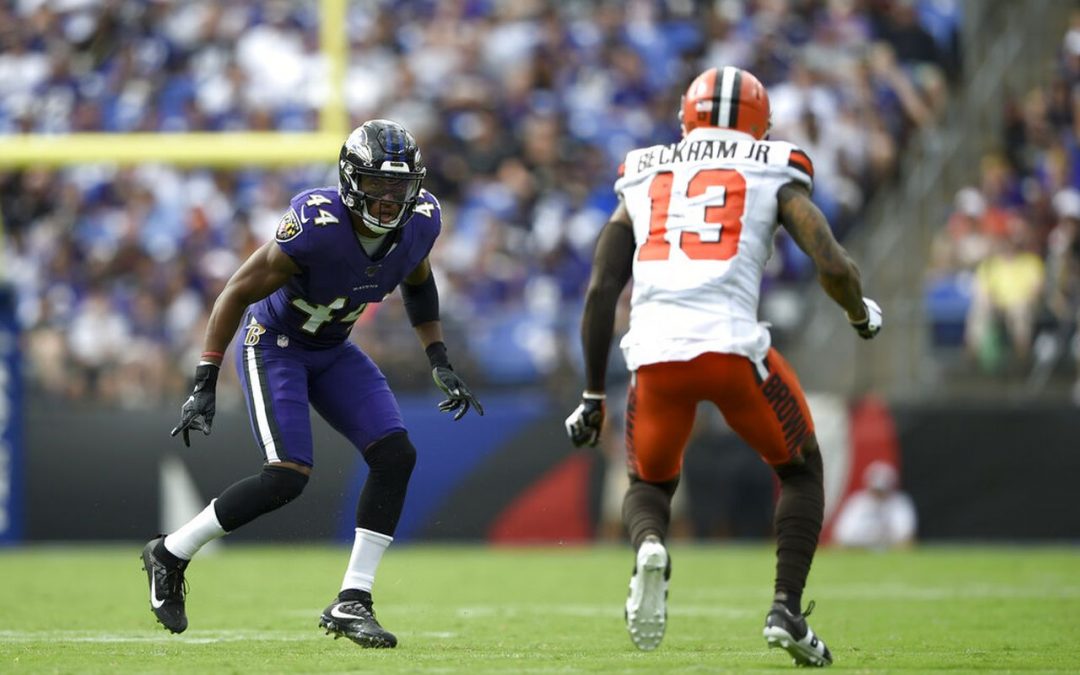 Week 1 of the 2020 NFL season is finally here, and the Ravens get to start the season with a Divisional opponent – the Cleveland Browns. Last year, the Ravens went 1 and 1 against the Browns and the week 4 loss at home in many ways was a catalyst for their twelve-game win streak to close out the regular season. In the team’s second meeting, the Ravens won handedly doubling the Browns in total offense and on the scoreboard.

The Browns were considered favorites to win the division at this time last season despite the team not posting a winning record in over a decade. While this is laughable in hindsight, there was some reasonable logic that led to this conclusion as the Browns had a talented roster and a QB entering his second season after a very impressive rookie campaign. Of course what the pundits didn’t consider was the rookie Head Coach, the offensive line with gaping holes at OT, and a 2018 season that looked a lot better on paper than it actually did in reality.

Fast forward to 2020 and the Browns are no longer favorites to win the division, but they are still considered playoff contenders. QB Baker Mayfield had a disastrous sophomore season, but the expectation is he can turn things around with a new Head Coach and offensive system that should takes some of the pressure of him. The roster is still very talented, especially on the offensive side of the ball, and they also have a Defensive Player of the Year candidate in Myles Garrett.

All of the pressure is now on the Ravens who are rightly considered a Super Bowl favorite in 2020. Obviously, the Ravens are led by the NFL MVP Lamar Jackson and returned much of their talented roster from 2019 while making some nice additions on both sides of the ball. John Harbaugh was able to maintain a cohesive coaching unit as both of his talented coordinators came back after having some head coach considerations in the offseason. The Ravens are poised for another impressive season, but the NFL is a week to week league and every single game is a unique match-up. Here are some of the things that I will be keeping a close eye on during Sunday’s game.

You can discuss the Ravens week 1 match-up with the Browns on our message board.

The Browns had an offensive line last year that left a lot to be desired and they made two major moves this off-season to fix the problem. The first was signing RT Jack Conklin away from the Titans in free agency and the second was drafting Alabama OT Jedrick Wills with the 12th overall pick.

The Ravens also made some major changes on the defensive side of the ball by trading for All-Pro DE Calais Campbell, signing DT Derek Wolfe in free agency, and drafting stand-out DT Justin Madubuike. Madubuike is dealing with a leg injury and may not be available for Sunday’s contest, but the presence of Campbell and Wolfe alone should transform the Ravens’ ability to generate pressure up front. How these new additions stack up could play a significant role in this game’s outcome.

Last season on defense the Ravens played dime (6 DBs) for almost half of all of their defensive snaps. There are a number of factors that went into this personnel choice, but one of those reasons was the relative weaknesses the team had at DL and LB. Another factor was the fact that the Ravens were leading a lot, often by double digits. The Browns, who are now led by former Vikings Offensive Coordinator Kevin Stefanski, will likely play a lot of 2 TE sets and try to run the ball a lot. I am curious to see how the Ravens match-up against this personnel. Will they stay in dime or use more nickel (5 DBs) packages? Will their nickel be a traditional 2-4-5 (DL – LB – DB) or will they lean more heavily on the defensive line and use some “jumbo” nickel 3-3-5 looks?

I am also intrigued by the Ravens offensive personnel choices. They made some waves recently by only carrying 2 true TEs on the 53 man roster. This is in stark contrast to 2019 when the Ravens heavily utilized 3 different TEs with Nick Boyle, Mark Andrews and Hayden Hurst all seeing over 500 snaps on offense. I have speculated this means the Ravens may more heavily lean on their WRs with a healthy Marquise Brown, Miles Boykin entering his 2nd season and two promising rookie WRs in Devin Duvernay and James Proche. Week 1 may give us some insight into how the Ravens deploy their weapons which could answer a lot of off-season questions.

Lamar Jackson vs. the Browns LBs

The Browns have one of the most inexperienced LB groups in the NFL and they will likely be without starter Mack Wilson when they face the Ravens this Sunday. This could be a problem against Ravens QB Lamar Jackson who puts more strain on opposing LBs than possibly any other player in the NFL. The Ravens zone-read, play action heavy, and RPO-based offense forces opposing defenders to constantly have to make tough decisions. Will Lamar hand off the ball or keep it? Is it a pass play or is it a designed run? Jackson made many of the most experienced defenses look silly last season, and he could be in for a big game if the Browns can’t figure out a way to contain him.

Humphrey and Beckham got tangled up in the first Ravens-Browns match-up which has provided a lot of fodder for fans, but Humphrey and the Ravens defense also got the better of Beckham in both games last year holding the star WR to a combined 6 catches for 66 yards and 1 TD on 13 targets.

I’m definitely going to be keeping a close eye on how this match-up plays out in week 1. Now the Browns may move Beckham all over the field and we don’t see the Ravens track WRs very often, but when he is lined up across from Humphrey I have to think there will be some fun battles to watch.

Last year the Ravens came out and shocked the NFL world by passing all over the Miami Dolphins. Will the Ravens do the same in 2020 or will they get back to their bread and butter and try run the ball down the Browns throats? The evolution of the Ravens offense is going to be a thing to watch, but we are also very excited to see how the new-look Ravens defense led by Calais Campbell and Patrick Queen look on the football field.

There are a lot of variables and factors at play in every NFL game, so it is hard to isolate one specific factor as a key to winning, but I think how the Ravens defense handles the Browns rushing attack will be critical in this game. Kevin Stefanski used Dalvin Cook to propel the Vikings offense in 2019 and I think he will try to use Nick Chubb and Kareem Hunt to do the same in 2020. The Ravens are going to have to stop the run and be disciplined on play action to shut down a talented Browns offense. If they can do that, I think the Ravens win the game without many issues. Regardless, Lamar Jackson and the Ravens will be able to score the ball and in the end I think the Ravens do enough on defense to slow down the Browns.

I see the Ravens winning their home opener 27-17.