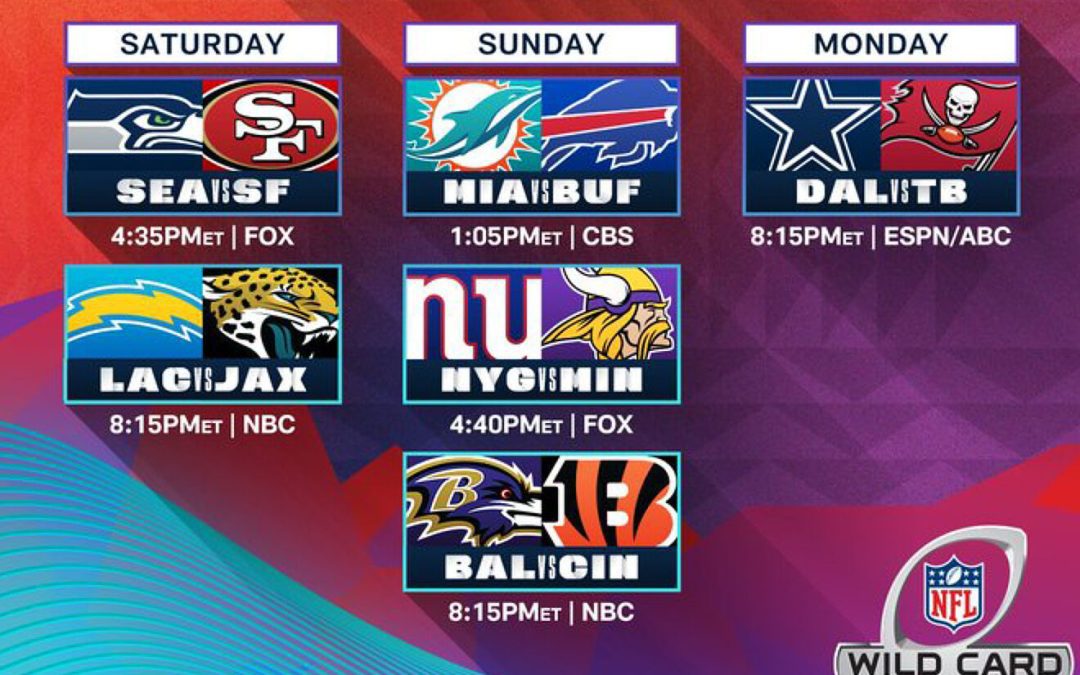 Time flies when you’re having fun, but it’s a slog when things aren’t going well.

Let’s rewind a little more than four months back. The date was Sept. 8 and the NFL season officially kicked off as the Bills took on the defending champion Rams at SoFi Stadium. My looming sense of dread turned out to be well-founded as Buffalo stomped my team on national television.

And since that date, the season has been a series of kicks to the gut for my fandom, but a whirlwind of surprises elsewhere. The Jets ended up being better than expected. So did the Giants. Don’t get me started on the Vikings. I’ve been waiting for them to prove themselves as frauds and they’ve defied me the entire way. The Lions took a leap forward under the indefatigable Dan Campbell. The Jaguars won the AFC South, for Pete’s sake.

The Colts stunk out loud. The Packers didn’t make the playoffs. The Buccaneers won their division, but finished the regular season under .500 as Tom Brady finally started acting his age.

And now we’re here. It’s the playoffs! I’ve said it before: With the field being expanded, the wild card round is now the best football weekend (and Monday night) of the year. All six upcoming games are rematches from the regular season. I can’t wait to see what happens.

Let’s not waste any time.

These NFC West rivals played twice during the regular season and San Francisco won both. Many people say that it’s very hard to beat the same team three times. I don’t think that theory applies here.

The 49ers are riding a 10-game winning streak and finished with the league’s best point differential at +173. Their defense is an absolute terror. Don’t believe me? Here’s an interesting stat popped up this week: NFL teams went 0-15 this season the week after playing the 49ers. Wow. That’s an ego boost. San Francisco pounded teams so badly that their opponents carried that pain into their next game.

“It is a record we’re aware of and it’s one we think is pretty cool,” Shanahan said on Dec. 22 (h/t to NBCSports Bay Area). “It’s a pretty cool stat. It could be a coincidence, but we like to think it’s not, so we’ll take it that way.”

It’s not a coincidence.

So, what hope do the Seahawks have? Not much of one. The way I see it, the only way Seattle leaves Santa Clara with a victory is if the 49ers beat themselves. And while it’s true that the latter will have a third-string quarterback in Brock Purdy under center, who could theoretically collapse under the playoff pressure, I haven’t seen him shrink yet. And I have to imagine that Shanahan will lean on his running game and put Purdy in position to succeed with easy reads in the play-action game.

The Seahawks have a lot to be proud of. They were universally picked to finish last in the division and ended up reaching the postseason. Geno Smith has been a wonderful surprise. But the fun ends here and there’s nothing to be ashamed of.

If you don’t know what to make of this game, you’re not alone. The Jaguars finished an impressive run to the playoffs by winning their last four games of the season, including a Week 18 win over the Titans that punched their ticket.

And as you might remember, these teams faced each other back in Week 4 and Jacksonville destroyed L.A. at SoFi Stadium 38-10. I remember being very excited at the time, even though Chargers quarterback Justin Herbert was dealing with a rib injury he suffered the week before.

Speaking of injuries, L.A. had a couple players go down in a meaningless Week 18 game. Deep threat receiver Mike Williams left after suffering back spasms and pass-rusher Joey Bosa may have aggravated a groin injury that had already kept him out of several games this season. If both are hobbled or can’t take the field this weekend, that’s obviously going to be a problem.

Meanwhile, things are setting up nicely for the Jags. They get this game at home after winning a bad division and their defense, although weak against the pass, finished tied for fourth in the league with 27 takeaways.

The Chargers are favored by 1.5 points. I smell an upset here.

Miami’s 2022 season was a roller-coaster. When they were on, they could compete with anyone in the league. When things went sideways, it seemed like they had never played football before. After losing five games in a row, they needed a Week 18 win over the Jets to reach the postseason, which they barely managed, squeaking by 11-6. Yuck.

Meanwhile, it hasn’t exactly been smooth sailing for Buffalo. They started out hot, then ran into a couple roadblocks. Von Miller was lost for the season with an injury and of course, who could forget what happened to Damar Hamlin a little over a week ago.

These AFC East teams split their two regular season matchups, with each winning at home in close games. Will we see a third thriller on Sunday? It doesn’t look like it. Dolphins head coach Mike McDaniel announced on Wednesday that Tua Tagovailoa has been ruled out due to concussion symptoms.

With Teddy Bridgewater nursing a hand injury, rookie Skylar Thompson is being prepped to start the game. This won’t be close. Especially in upstate New York with a keyed up Bills Mafia screaming their heads off.

When the Giants fell to the Vikings 27-24 on Christmas Eve, I was pulling my hair out. New York moved the ball well enough to win, gaining a season-high 445 yards of offense, but kept shooting themselves in the foot with critical errors when they were inside or around the red zone.

The Giants put the offense in the hands of Daniel Jones in that game, which was a smart move considering the Vikings are awful against the pass. Will they do the same thing this weekend? Logic says they should, but head coach Brian Daboll might have some wrinkles he’s keeping under his vest.

Minnesota has the weapons to put fear into opposing secondaries. Enough has been said about Justin Jefferson. We’ve all seen his brilliance. But the man who might be the most important is tight end T.J. Hockenson. In the first matchup against the Giants, Hockenson went off with 13 catches for 109 yards and two touchdowns. What’s more, the Vikings will add some depth at the position as fellow tight end Irv Smith will return after being activated off injured reserve.

Are the Vikings a team of destiny? I’ve seen some Minnesota fans make that argument after they pulled off that miracle comeback against the Colts a few weeks ago. I’m not taking out my anointing oil yet. But they have enough to get this one at home.

I can expound on the finer points of this game, but it’s pointless. This is another matchup of division rivals and of course, they split both games in the regular season.

There’s only one name that matters: Lamar Jackson. He missed the final five games of the season with a knee injury and judging by the remarks coming out of Baltimore, Jackson’s chances of playing on Sunday aren’t good. And even if he does play, it’s hard to imagine that he’ll be 100 percent.

Meanwhile, the Bengals have won eight games in a row and can play with any team in the league. And they’ll be at home. It’s simple math.

These teams were featured in the season’s first Sunday night game, which Tampa won 19-3 thanks to a dominating defensive performance.

Things have changed somewhat since then.

The Buccaneers limped into the playoffs, having won a putrid NFC South. The Cowboys have been forged in steel, competing with two other eventual playoff teams in the NFC East and managing well for a few weeks during the season without starting quarterback Dak Prescott.

I have many years of bad Tom Brady memories that haunt me. My gut instinct is to always bet on Tom Brady during the playoffs. But this isn’t the same Tom Brady. The man we see now is in his mid-40s with a divorce that played out in front of the nation. His decision to forego retirement looks like a colossal mistake.

And even though Dallas has a tendency to pull defeats out of the jaws of victory, I can’t see them screwing this one up.

Put him in the Hall: If Steelers coach Mike Tomlin was ever going to have a losing season, this was the year. Their quarterback situation was a mess and they looked lost at times. But no. They won six of their last seven games and even though they missed the playoffs, they still finished with a 9-8 record. Start carving this man’s bust. He’s a lock for Canton.

If this is it: Sean McVay won’t be returning as Rams head coach. I know he hasn’t announced that yet, but he’s given all his assistants permission to seek other jobs. That’s about as sure a sign as you can get. And there’s no bitterness from me. I love the guy. He brought a Super Bowl to Los Angeles and I can’t thank him enough for that. Here’s hoping he finds success and happiness in whatever he decides to do next.

Hamlin update: Just nine days after suffering cardiac arrest on the field, Damar Hamlin has been discharged from the hospital. That’s what I’m talking about. Don’t sell hope short.