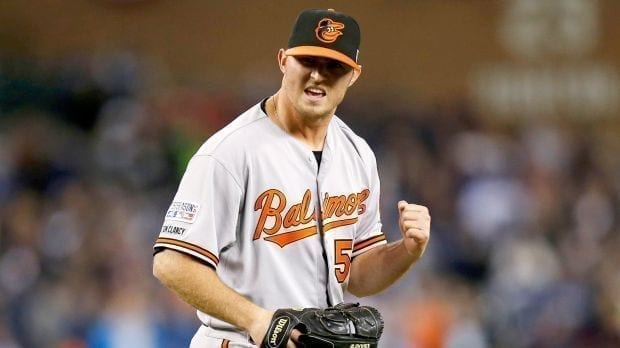 When Fangraphs released its initial 2016 record projections, a familiar team was projected to win the fewest games in the American League. That’s right, the Baltimore Orioles were pegged to win 78 games — just a three-win decrease from the season before but still enough to purportedly finish “last” in what’s bound to be a wild AL race this season.

Now projections are notoriously conservative and tend to cluster teams toward the middle — for instance, they have just one AL team with over 90 wins (Boston – 91) presently and just four with fewer than 80 — and aren’t meant to be something that’s taken as gospel. What they are would be computer-generated ideas of how good a team is likely to be, with various variables added in depending on the projection. Fangraphs’ formula incorporates Steamer projections and ultimately is supposed to include ZiPS as well (it might already, though that’s unclear at this point), which might explain some of the sliding teams have done recently.

But that sliding is also probably contingent on the last few free agents which have signed. Strangely, Chris Davis didn’t move the needle much for the Orioles, while it appeared the Justin Upton signing gave Detroit some help while costing the team pegged to finish last in the AL Central: the Minnesota Twins. In fact, in one of the more recent iterations, the Twins and Orioles were both picked to share the cellar with 78 wins. Something has shifted since then — I suspect it might be addition of ZiPS but I can’t verify that right now — which has moved the O’s into sole possession yet again, but now with a total of 77 wins.

In an odd quirk — and this is something I mentioned on my “Midwest Swing” podcast last week — it appears that all the rebuilding teams (at least those who have self identified as such) come from the NL. In fact, the six worst teams by projected record come from the senior circuit before the Orioles come into play (in order from lowest moving up): Phillies, Braves, Brewers, Reds, Padres and Rockies. Now not all of those teams necessarily identify as rebuilding, but let’s be honest, do those last two really have a shot in the NL West gauntlet, especially with how good the Dodgers are, and how the Giants have gotten their even year magic started with a free agent spending spree? I don’t see it.

Another reason for optimism is that the projections see the Royals, fresh off a 95-win World Series team, as a 79-win club. This is a Royals team that returns virtually every important piece, and is sans Greg Holland but plus Joakim Soria. They’ve also added Ian Kennedy and dumped Alex Rios. So sometimes the projections skew way, way negative and miss the mark. That’s surely the hope for O’s fans, right?

You can see the projections here for each player, but where do things go south for the O’s? Things start out solidly, with pretty good seasons projected from Matt Wieters (.309 wOBA, 2.2 WAR) and Chris Davis (.357 wOBA, 3.3 WAR), but second base and shortstop are black holes. They’re giving Jonathan Schoop credit for over 500 plate appearances, but his usual brand of low OBP plus power only results in a .307 wOBA and so-so fielding puts him as worth just over a win.

They’re also not forecasting much of a rebound from J.J. Hardy (.239/.280/.363), and perhaps most disappointing is that they’re suggesting he’ll put up about as many WAR (0.9) as Manny Machado at the position. And unfortunately, Machado (0.7 WAR) will do it in 70 plate appearances, while Hardy will need nearly 600. Yikes.

The projections have Machado and Adam Jones rocking and rolling in their respective positions, but it’s to no one’s surprise that follows this club even semi-closely that flanking Jones is nothing but trouble. Their 700 likely plate appearances in left are allocated as such: Nolan Reimold (385), Mark Trumbo (140), Henry Urrutia (105), LJ Hoes (63) and Joey Rickard (7). It’s no surprise that group is expected to hit .250/.314/.398 and accumulate fewer than one win, making it no surprise that fans might pine for still trying to sign Dexter Fowler, or even Austin Jackson. Right field is hardly better, with Trumbo taking half the plate appearances and just over half the projected WAR (0.6 of 1.0) with Hoes, Urrutia and Dariel Alvarez filling in the blanks.

The Orioles’ woes culminate at DH, where they have Jimmy Paredes and Christian Walker platooning and ultimately the group finishes with minus-0.5 WAR. Offensively, it appears there are some easy tweaks that could get this going in a positive direction. If one has any reason to believe Davis can play right field capably, shifting him out there, moving Trumbo to first and signing someone like Pedro Alvarez — has been mentioned in the articles and forums here — could be one way to move some guys around and net positive value. Anything that keeps Trumbo out of the outfield helps, though he’s not really an accomplished first baseman either.

The Orioles can swing the pendulum the other way as well, nabbing Fowler or Jackson and moving Trumbo to DH permanently. That’ll certainly cost more than Alvarez, but will also net a much more positive effect with both likely providing much, much better defense in the outfield to the team effort. For a rotation that projects with just two full-time starters over 7.0 K/9, mitigating balls in play will be key.

The projections don’t like the O’s rotation, and that probably comes as no surprise post Wei-Yin Chen. Just Kevin Gausman is projected with a sub-4.00 ERA (3.86), and the group as a whole is pegged for a 4.28 ERA. Now we don’t know yet what the run environment will look like in 2016, but in 2015, that mark would have been in the bottom third of rotations. In fact, nearly the same as last year’s Royals team (4.34).

Essentially, they see the top four of Chris Tillman, Ubaldo Jimenez, Gausman and Miguel Gonzalez as more or less set, with Tyler Wilson at No. 5 sharing innings with Dylan Bundy, Mike Wright, Vance Worley and Parker Bridwell. It’s not terribly surprising to see why USA Today’s Ted Berg ranked this the 24th-best rotation heading into the season, just ahead of the Twins and behind the Reds.

The bullpen is markedly more interesting, with five regulars projected for more than a strikeout per inning, headlined by Zach Britton. Britton’s basically a one-trick pony with his sinker, but that’s just fine since Eno Sarris of ESPN and Fangraphs just named that the best pitch in baseball. The PITCHf/x on the offering reads like a seedy magazine: 99.3 mph max velocity, 95.8 average; .588 OPS against, 15 percent whiff rate and unconscionable 81.8 percent groundball rate.

Having five relievers (Britton, Darren O’Day, Brian Matusz, Brad Brach and Mychal Givens) project with more than a strikeout per inning is interesting given the rotation parallels to the Royals, since that’s their pitching path to success. That is, a shaky-ish rotation and a shutdown bullpen. It’s also huge to have Buck Showalter massaging the bullpen, as he’s a master of pushing those buttons. It’s also interesting that it’s not just random pitchers projected to have those strikeout rates, but the top five guys by expected innings count. That can’t be by accident. Throw in a situational groundball/long guy like Vance Worley and a few more intriguing arms and you might be onto something here.

I don’t think you have to squint too hard to see a possible Royals blueprint being followed here, but for that to really take hold, I think the club has to address the offense with one more piece as mentioned above. And to really stick to the blueprint, it would be with a capable corner outfield defender. We’ll see if that happens, though.