Ravens beat Titans. On to Buffalo 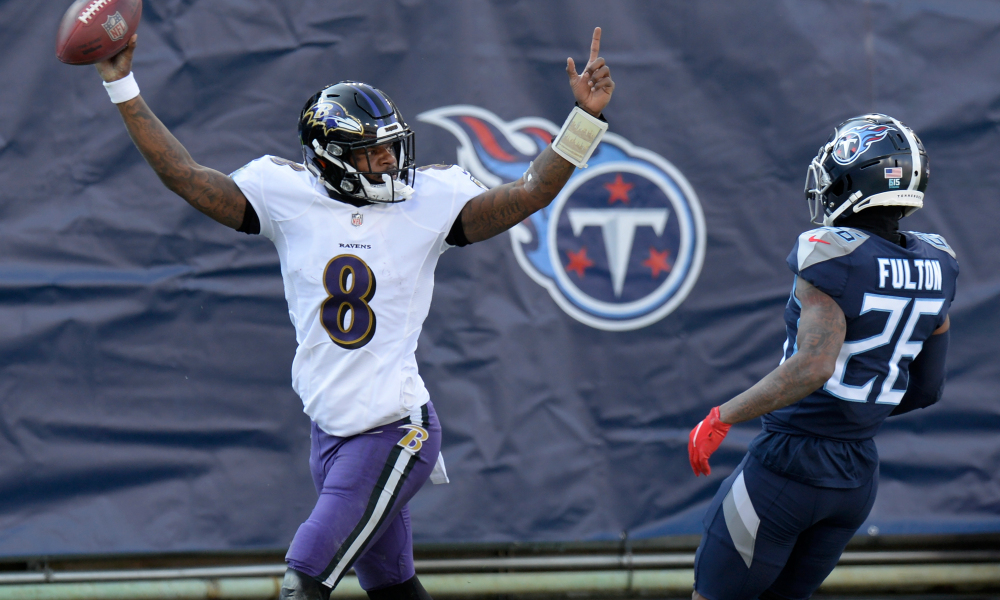 Discuss your thoughts on the Ravens win in Tennessee, and looking ahead to the Bills this week, on our message board.

The Ravens haven’t been challenged in about a month but answered the bell yesterday. With revenge and quieting critics on their mind, Lamar Jackson led the charge, overcoming an early 10-0 deficit to pick up his first playoff win, 20-13 against the Titans. The win exercised a couple demons that have been hot take topics since the playoff loss to Tennessee last year. The upper hand now belongs to the Ravens in this brewing rivalry.

I mentioned last week my key to this game was keeping the Titans out of 3rd and manageable downs. Give yourself a chance to eliminate Derrick Henry as a viable option and put it on the Titans to throw the ball to convert 3rd and 4th downs. Turns out they didn’t need to do this in order to make Derrick Henry a complete non-factor. Two drives to end the first half ended with a Derek Wolfe sack on 3rd and 5 leading to a punt. Then a Jihad Ward batted pass that Ryan Tannehill caught and was tackled for a 10-yard loss turning 1st and 10 into 2nd and 20. Three and out ensued. Otherwise, the Titans had a few 3rd and 2s, a 3rd a goal, they ended up only converting 1 first down on the ground the entire game and held Henry to just 40 yards on 18 carries. His lowest output of the season by far.

The defense showed the Titans confusing fronts, stacking the box and making Tannehill have to guess who rushes and who doesn’t. Although, they often sold out to stop Henry and let the defensive backs play one-on-one against the receivers. A.J. Brown looked like he would best Marlon Humphrey after a few catches and a touchdown on Titans second drive. But his impact was minimal after that.

By now we’ve seen the highlights, and on offense it was the Lamar Jackson show. 136 yards on the ground including a 48-yard touchdown run, literally right after one of the announcers suggested the Ravens “weren’t built for this”, given their recent playoff struggles.

I thought the Ravens would score more given the Titans woeful defense. But sometimes the other team has a great game plan, and you have to adjust. That was the story here as the Ravens offense took a while to get it’s legs (no pun intended, Lamar) and halftime adjustments opened up the short passing game which began to open up the running lanes Tennessee had shut down to that point.

With the Browns upset win over the Steelers that made Ben “the diva” Roethlisberger literally cry, the Ravens head to Buffalo for a Saturday night fight with Josh Allen and the Bills. The Bills present a whole different problem then the Titans did. The Ravens had to focus all their attention on Derrick Henry to stop him, and risk getting beat in the passing game. This weekend, the Ravens will have to flip the focus and try to slow down the passing game of Allen, as the Bills present little threat in the ground game. Like the Titans, the Bills can also score in bunches ranking second in the league in points per game at 31.3.

Buffalo is head and shoulders better than the Titans according to this metric, as TEN ranked near the bottom in defense and special teams. Buffalo is as complete a team as the Ravens but showed a little vulnerability in a close game with the seventh seeded Colts. A better quarterback than the aging Phillip Rivers, may have led to a different outcome.

Weighted DVOA, measuring the teams play by play performance with extra emphasis on the most recent games. Ravens – 7th 15.7%. Bills – 1st 34.5%. If you thought the Ravens were heating up at the right time, here comes Buffalo. Two hot teams. Both challenged by their opposition in the wild card round. Someone is going to leave disappointed Saturday night.

Perhaps some value on betting the Ravens here? Consider that Vegas doesn’t lose, the spread is the best predictor we have, which brings me to one of my keys to this game…the weather. Still six days out, but the weather looks less than ideal. Low of 28 degrees, snow showers, probably not too much accumulation, 15 mph winds. I would believe foul weather would benefit the Bills. Josh Allen played his college ball at Wyoming in nasty weather often. He’s a big guy, big hands, grip on the ball shouldn’t be a problem for him. Lamar Jackson grew up in Florida, I don’t recall him being tested in the snow/sleet before. Strong winds may neutralize Justin Tucker a bit. I can totally buy that based on the weather; Buffalo gets a little more edge from Vegas than the statistical predictors alone indicate.

Worth noting that Buffalo was a 6.5-point favorite against the Colts last week. Points per drive predictors suggested that was right on when you factor in the three points for the home team, and they did not cover, winning by three.

In the passing game, Josh Allen’s year has been up and down, but he’s currently up. Allen is one of the most accurate passers, but that percentage drops when you pressure him at a rate similar to Ryan Tannehill. That brings me to key number two in this game. Pressuring Josh Allen is paramount. With a clean pocket, Allen completes 79.1% of his passes, and is accurate on 85.8% of them. Both of them are tops in the league. The Ravens should be disguising their blitzes every single play, never lead on where the rush is coming from and they must win in the battle in the trenches. Unleash Matt Judon and Yannick Ngakoue. This is the kind of game you acquired a guy like Ngakoue for. Buffalo struggles mightily in the running game, having Ngakoue out there for a majority of the game shouldn’t be a detriment, but more of an asset.

Another key for the defense, don’t get fooled on play action. Again, the Bills run game is nonexistent., yet Allen runs play action 34% of the time. Just a tick under what Lamar Jackson and Ryan Tannehill do.

More proof of the lack of faith in the Bills run game is that they ran the ball 21 times against the Colts. 11 of those by Josh Allen. Their two lead backs, Devin Singletary and Zack Moss are 25th and 44th in rushing yards on the season respectively. That duo has found the endzone six times, while Allen has rushed for eight touchdowns alone.

All the Ravens need to do is limit Josh Allen, and this other guy, maybe you’ve herad of him, Stefon Diggs. He only leads the league in targets, catches, yards, and is near the top in first downs converted and plays of over 20 yards. Diggs opens the game up for the other receivers and Allen will take advantage of them as well.

I’ll be interested to look at the game form Week 7 when the Chiefs beat the Bills 26-17, and held Josh Allen to 14 of 27 passing, for 122 yards. He still managed two TDs and threw a pick. How did the Chiefs limit him, would be a good place to start game planning.