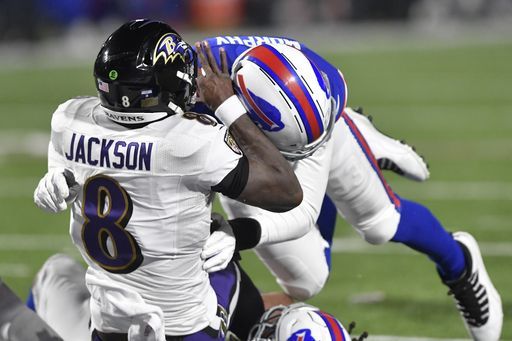 Self-inflicted wounds were the story in the Ravens 17-3 loss to the Bills. They underperformed in last year’s 28-12 divisional round loss to the Titans…then said, “hold my beer.”  They exercised some demons in last week’s win in the wild card round. But this round was the stumbling block last year, and not getting over this hurdle this time around is a failure. Plain and simple.

(Discuss this on the BSL Board here.)

First things first, I’m not ready to talk in great detail about what this team needs next. They added Calais Campbell and Derek Wolfe to the defensive front after Derrick Henry dismantled them a year ago, in order to prevent that from happening again. How do you fix all the unforced errors made out there last night? You can’t do it in one offseason it seemed like so many.

Lamar Jackson. I hope he overcomes his concussion quickly with no side effects. That said, it’s hard for me to entertain the idea of a contract extension for him right now, when he has another year, plus a fifth-year option which will very likely be picked up, on his rookie contract still. This offseason is the first time he’ll be eligible for an extension should the Ravens decide to award him one. This is not the right time. I’ve gone on record saying you pay for elite QBs who lift the play of others, or you draft them and use the saved money on building around them. Paying average quarterbacks’ big money because the market says so, is the fastest way to non-contention. We just don’t know yet how good, or average Lamar Jackson really is. We know the legs are elite, we know he can be a successful passer as well, evident by his MVP season a year ago. But we also know good teams can limit his abilities. He regressed in 2020. No doubt about it. 2021 might give us a clear view of who Jackson really is.

We play in the AFC North. There is a high chance of cold, windy, inclement weather being a factor in Baltimore, Cincinnati, Cleveland, and Pittsburgh in December and January. The class of the conference looks to also reside in Buffalo and Kansas City for the foreseeable future. Better figure out how to compete with Mother Nature. Potential poor weather conditions had to be on the minds of the coaching staff, and Jackson, which could have negatively affected their preparation. It was windy. Big deal. They still didn’t execute on the ground good enough which is their bread and butter.

I don’t think a healthy Lamar Jackson in the 4th quarter changes anything about the outcome of that game. He practically had very little going for 3+ quarters. The Bills defense limited him, pressured him, forced him to make bad throws. His running instincts weren’t all there as he’d often change his mind mid-scramble or try to cut back instead of just hitting the gas to try and gain the edge.

I’ll circle back to Jackson more at the end. Moving on to the coaching.

I’m going to trust whatever Steve Biscotti’s decisions are when it comes to coaches on the team. I would be shocked if the Ravens didn’t retain the big three, John Harbaugh, Greg Roman, Don Martindale, unless Roman or Martindale get poached for head coaching gigs. I won’t be mad though. if major coaching changes are made with regards to John Harbaugh, and Greg Roman after once again showing unpreparedness and extreme underperformance in the divisional round. THREE POINTS! It was an even worse performance than last year. I wondered before the game, last week in Tennessee the Ravens were fueled by revenge. Logo dancing, not shaking hands, trash talk a plenty. What fueled them this week? Obviously, nothing. They were tight, nervous, undisciplined, and outcoached.

On the flip side, I won’t be mad if those guys are retained given that there is something to be said for continuity, and the regular season success they have that affords you these opportunities to play in January in the first place. The players seem to love Harbaugh and I like the way he treats his guys like family. Roman is a good fit for the offense we want to run. It’s just that adjustments need to happen quicker, and smarter play calls have to be made. The whole world sees the Bills blitzing every down, the line isn’t holding up long enough, and a 3rd down call had all receivers streaking deep downfield with no check down options. Jackson is sacked and no receiver even has their head around yet to look for a ball in the air. Deception is key in this offense, but there is no secret when you go empty backfield on 3rd and 2, 3, 4. Those are the downs the entire playbook is open, don’t give the opposing defense a head start on what’s coming. There was a three and out where from the couch I knew what was coming just based on the alignment and tendencies. If I knew it, the Bills definitely knew it.

Furthermore on Harbaugh, I’ve got to know the context of Harbaugh’s lame duck excuse at halftime that was posted on the screen at the start of the 3rd quarter. He told sideline reporter, Michelle Tafoya, in some sense, that the wind was affecting snaps. This after Patrick Mekari snapped a ball so badly off target that only Chris Davis would swing and miss at it had it been a baseball. If Harbaugh really believes that we, the fans, are buying that crap, he needs his head examined. Mekari later snapped a ball over the head of Jackson, leading to a mad dash to scoop it, throw it away, and landing Jackson in concussion protocol where his season would end. No poop jokes, no returning to play hero. He had to watch the 2020 season end from the trainer’s room. The Bills center handled snaps just fine. Morgan Cox had no problems getting the long snaps to Sam Koch on target. But the wind is going to move a snap so dramatically in the span of a few yards? Stop it. Tell me we weren’t making excuses instead of addressing problems.

Never in my life have I seen the center/quarterback exchange be so shaky, in a number of games.

Lastly, and this will be a thought that sticks in my head until proven otherwise. I called the Bills offense “one dimensional” all week, like it was a bad thing. What I didn’t do was admit the same about the Ravens. Their offense is also one dimensional. What we saw last night is what happens when two opposing defenses take away the one thing the offenses do well. Points become a premium. Moving the ball becomes harder. The team that makes the least number of mistakes usually wins out. That was clearly the Bills.

This offseason the Ravens need to come to grips with the fact that they are one dimensional, and they do not have the ability to change gears when a playoff caliber team stymies their run game. Sure, they make adjustments at halftime. But they need to be multi-dimensional all game. There was more of this in 2019, and perhaps that needs to be revisited by Harbaugh, Roman, and Jackson collectively, to figure out how to get Jackson back to being a league leading passer, as he led the league with 36 passing touchdowns in 2019. I don’t need 5,000 passing yards. I just need the offense to not be good at just one thing. Being one dimensional doesn’t work. It didn’t work for the Ravens last night. Quite frankly, it didn’t work for the Bills either, but someone had to win that game, and it was the team who didn’t throw a pick six and could snap the ball properly.