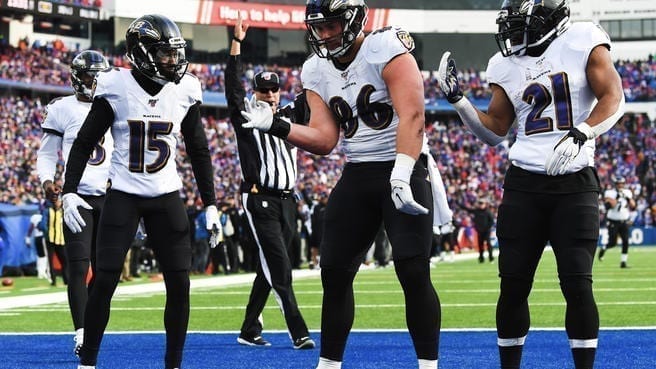 Two weeks in a row, Ravens get it done without their best game.

The Ravens got the job done with a 24-17 win in Buffalo and clinching a playoff berth in the process. The earliest a Ravens team has done so in their history. But it did not seem to come easy. Lamar Jackson had one nice run, instead of a few. He also threw his first interception since week 5. They weren’t able to really put the game out of reach. With a chance to eat up the clock in the 4th quarter to end the game, they couldn’t. The offense amassed just 257 total yards on the day and most of that was a 61-yard catch and run by Hayden Hurst (selected ahead of Lamar Jackson in the 2018 draft).

Good for them, the defense came to play and held Josh Allen to well under 50% completion rate on the day, and the Bills to 209 yards total. Some referee aided flags on the Bills last drive was the only thing making it a game in the end.

But you could also say the Ravens got lucky because the Bills receivers found themselves open, often, and Allen just missed his mark. Had he been on point, could have been a devastating day for Baltimore.

Either way, winning ugly counts the same in the “W” column. The Ravens have Super Bowl titles while having an offense not score a touchdown for 21 straight quarters. Also, while losing four out of five to end a season, losing badly to some teams along the way as well. They are 11-2 and the number one seed in the AFC. That’s all that really matters right now. Keep grinding.

Ravens now sport the biggest target on their back.

When you have the target on your back, you are getting every teams very best game. The New York Jets are coming in hot, kind of. With nothing to play for other than to be spoiler. Teams with nothing to lose can be the most dangerous. Think back to 2016. The Eagles come to town in week 15 with a 5-8 record while the Ravens are in the playoff race. Same as these Jets. Eagles went ahead early by going for two after their first TD. The Ravens let them hang around and it got them believing in themselves. Philly scored a TD in the final seconds and went for the win instead of the tie by going for two again. One that the Ravens stopped, but it’s the risks you can take when you have nothing to lose. Fake punts, surprise onside kicks, two point plays just for fun.  Have to be ready for anything and take care of your own business. Make it about you, not them.

Cleveland after that is currently still in the playoff hunt, hates Baltimore’s guts because everything the Ravens have done “was supposed to be theirs” according to that fanbase. Not to mention they came into our house and bullied the Ravens in week 4. The Ravens may stand in their way en route to a possible wild card spot, or the Browns would take joy in doing their part to cost the Ravens the one seed.

Steelers in week 17. Let’s be honest. The Steelers circled this game the day the schedule was released. Hopefully the Ravens have the one seed secured and it doesn’t matter as much. It would be nice to win that one though and have it cost the Steelers a playoff spot.

Can the Ravens win out?

New York Jets (5-8). “Gang-Green” are winners of four of their last five. Albeit against the Giants, Redskins, Raiders, and Dolphins. With a loss to the hapless Bengals in there. They may also be without Le’Veon Bell and Jamal Adams. No excuse here.

On the road at Cleveland (6-7). The Browns walloped the Ravens 40-25, way back in week 4. Worth noting that the Ravens defense has a much different look since week 4. Division games are tough, weather could be a factor in the mistake by the lake this time of year. Browns off field drama seems to trump their on-field play often. Locking in the number one seed could be on the line, so do not let this opportunity slip away.

The regular season wraps up with the hated Steelers (8-5) coming to town. They have won seven out of their last eight, with the Bills and Jets coming up next for them. Somehow Mike Tomlin is able to be in the Coach of the Year conversation. Media is raving about the way the Steelers have rebounded. But to rebound, you have to lose a lot first. They started 1-4, but I guess we’re ignoring that? Not holding that against Tomlin? Devlin Hodges has to be loser at some point. They haven’t beaten anyone noteworthy. Too early to tell what, if anything is on the line here.

What if the Ravens lose a game? Two or more games?

The New England Patriots are effectively two games behind the Ravens for the one seed, one game in the loss column. If they end the season with the same record, the Ravens have the head-to-head tie breaker. New England finishes their season with the Bengals, Bills, and Dolphins. That is two surefire wins, likely three for them.

One loss doesn’t hurt the Ravens at all. They would finish 13-3, which is the best the Patriots can finish, and the Ravens win that tie breaker.

Two losses pretty much ensures that the Patriots retake the one seed at 13-3 unless the Bills show the ability the beat a good team, or some miracle happens where the Jets/Bengals play like gods for 60 minutes. While the Ravens would be 12-4 with two losses. It also brings the Chiefs into play who could still finish 12-4 and would hold a head-to-head tie breaker over the Ravens, which knocks them out of the first-round bye.

Maybe I should have prefaced this by saying that according to ESPNs Football Power index, the Ravens have a 96% chance of earning the number one seed in the AFC. Nobody cares. Work harder. Play hard until they tell you you can’t play anymore.

Do you ever rest Lamar Jackson and company?

We have seen this play out different ways with different teams, and the results don’t really change. There is no right answer. Some teams rest their stars the last week and get bounced from the playoffs. Some teams do this and go on to win the Super Bowl. Some teams don’t mess with success and everyone plays. You want your guys to get reps but don’t want them to get injured either. It’s a fine line.

The 2012 Ravens had the AFC North locked up, had their seeding in the playoffs locked up going into week 17. Joe Flacco played two drives before giving the reigns over to Tyrod Taylor. I think this is the best way to go for a couple reasons. This still gets Lamar Jackson and others in the mindset, the routine of preparing for a football game. It’s also very likely that the Ravens will have a bye week as well to enjoy, so is two weeks completely off, out of the routine really beneficial? Does rust begin to build?

I would however be pretty quick with the hook on some guys should the Ravens go up big in these last three games. Up three scores in the 4th, go to RG3, rest all the veterans you can. Marshal Yanda, Ronnie Stanley come to mind. Pretty much the entire secondary. Mark Andrews who despite being tough as nails, has taken a beating this year.