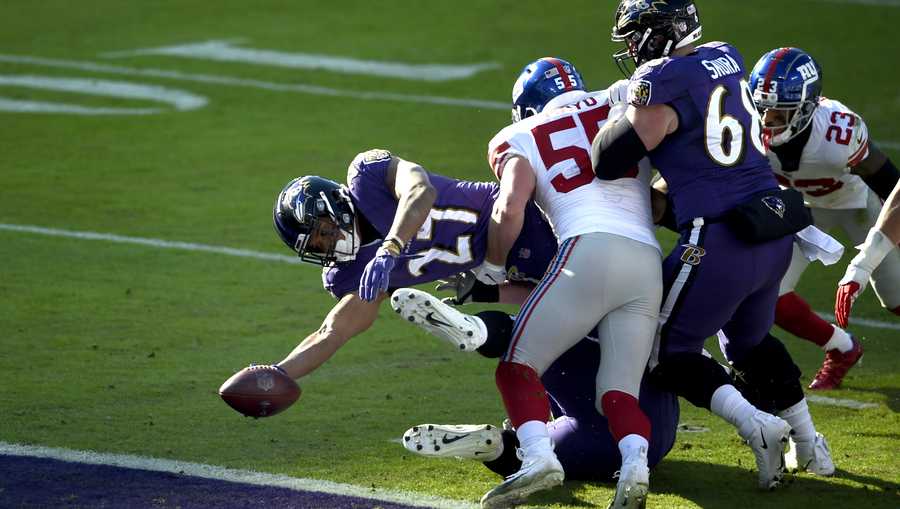 Discuss your thoughts on the Ravens 27-13 win vs. NYG, and these topics on our message board.

Only team that can keep the Ravens out of the Playoffs, is the Ravens.

Baltimore continued to handle their business today, winning their fourth straight game, 27-13 against the New York Giants. Another game you don’t want to draw too much from given the opponent. However, look around the league. How close were the Chiefs to getting upset at home by the Falcons? The Jets have won two straight games now. The Colts may have been the league’s hottest team and the Steelers may have been the coldest, but those roles reverse in the matter of a half with the Steelers comeback.

A lot of quibbling this weekend as the Raiders epically collapsed at the hand of the Dolphins on Saturday, making it less likely the road to the playoffs would clear for the Ravens. Low and behold, the Colts lose today. The Browns lose today. The Ravens winning puts them into the sixth seed as we speak, and winning next week stamps their ticket to the postseason.

The Ravens are starting to be touted as the team nobody wants to play in January. Well, they still have a game to play before we can talk about that. We know first-hand from 2017 that nothing is for sure until the clock says it is.

The Giants came into the matchup ranked 12th in total defense, and 6th in rushing defense. The Ravens have gotten back to a run heavy attack in recent weeks, and it continued today with the Giants having no answers.

Gus Edwards was the leading rusher with J.K. Dobbins, and Lamar Jackson giving similar output on the ground. The team rushed 40 times for 249 yards (6.2 YPC) and the three men mentioned here all amassing at least one run of 20+ yards.

They lead the NFL with 177.8 rushing yards per game.

Going along with the run game success, is the offensive line, that a month ago was the Achilles heel of this team. Matt Skura seemed single handedly responsible for the loss in New England because of the inability to snap a football cleanly. He was an asset today when Patrick Mekari left the game with a back injury that Coach Harbaugh doesn’t seem to feel like is too serious.

Orlando Brown Jr. has taken a major step in his development shifting over to left tackle and holding down the blind side. D.J. Fluker was a liability at times but has been solid of late.

Lamar Jackson has time to make his reads in the pocket. They are opening up big holes for the runners and not allowing the defenders to set the edge.

When asked about it postgame, Jackson said to the O-line, “Keep doing what y’all doing.” Have to agree. Seen it year after year. No matter the quarterback, the Ravens often go how the O-line goes.

Will discipline get better?

When you get to January, stupid penalties can mean all the difference in a game against quality opponents. Granted, I just gave the O-line high praise, but illegal formation seems to be a weekly issue. You learn where to stand in pee wee football. Sometimes they want to cheat to get an advantage on the defense, but it’s just that…cheating…hence the penalties. Stop it.

Justice Hill was guilty of an egregious roughing the kicker penalty. It wasn’t the first time he’s made special teams blunders, having fair catch inference against him as well this year.

We had delay of game on the field goal unit which turned a probably three points into a punting situation. Penalties in these fringe field goal range opportunities have haunted the Ravens, even during the win streak.

You can ill afford to give good teams a fresh set of downs when they are punting to you. You can’t be taking points off the board by committing fouls in Justin Tucker’s range.

Discipline has to get better. I really fear if the game comes that the Ravens get ousted, it will come down to someone being a scapegoat for a poorly timed, completely preventable miscue. Not because another team just beats them.

Look ahead to @ Cincinnati in the regular season finale.

The Bengals offense has regained its footing since adapting to life without Joe Burrow. They have won two straight against the Steelers, and Texans, with two different quarterbacks. It was Brandon Allen today against Houston throwing for 371 of the Bengals 540 total yards they racked up.

Tyler Boyd was inactive with a concussion suffered the week prior. He’s a guy that Ravens fans won’t mind seeing hit the golf course a week early as the team’s leading receiver, and heartbreaker here three years ago.

In their last meeting the Ravens practically shut them out, 27-3, as the Bengals took a field goal in the final seconds to avoid the goose egg.

Funny things happen in week 17. You get young guys playing more than usual, auditioning if you will.  Guys with fresh legs. We see things defenses haven’t prepared for. Don’t be one of those funny things. If the Ravens have attacked the final four games of the season as must wins, already flipped the switch to playoff mode, lose and go home, then they should have nothing to worry about considering how they have responded to that method of prep.

The Ravens figure to be double digit favorites once again.