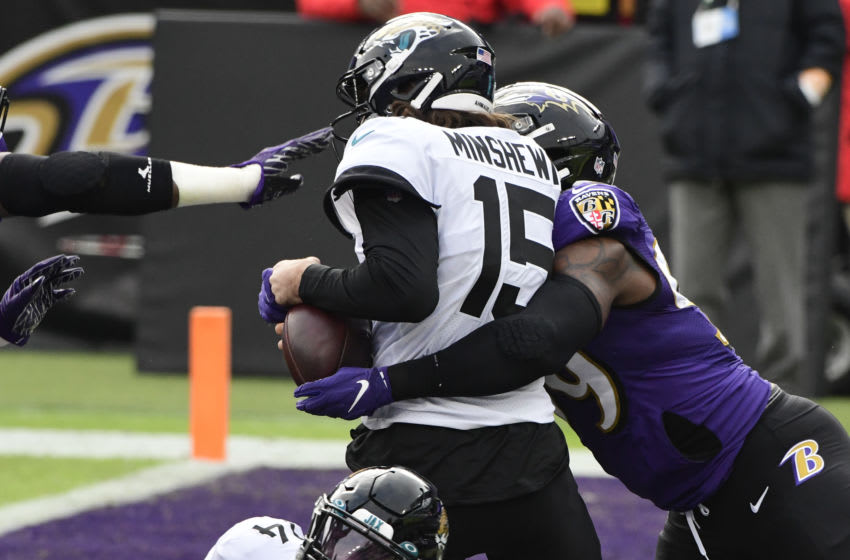 Discuss your thoughts on the Ravens 40-14 win, and these topics, on our message board.

Don’t want to read too much into this one given the Jaguars came in a 12-game losing streak, allowing 24 or more points in each of those games. They picked off Lamar Jackson on the first drive the and the Ravens turned it right into a safety, two points, and the ball back. That’s as close as Jacksonville ever was to being “in” the game.

It was off to the races. Sam Koch never saw the field in the 40-14 whooping. Lamar Jackson was responsible for four touchdowns, three through the air. 409 total yards of offense for the Ravens. They held one of the league top, and maybe most underrated runners, James Robinson, to 39 yards on 16 carries. He entered the game 3rd in the league in both rushing yards, and rushes over 10 yards. Trailing only Derrick Henry and Dalvin Cook. Good company to be in for the rookie.

We could talk about the improvement of some guys like Patrick Queen, showing up often on tackles today. Dez Bryant made a touchdown catch. But the Ravens did what we expected a good team to do to a team like this. Take it for what it is, and move on.

Have we seen the last of Mark Ingram?

Ingram was a healthy scratch for today’s game after playing just the first snap of the Browns game last Monday night. The 30-year-old in his 10th season has played 10 games, racking up 260 yards on 63 carries. (4.1 Y/A). With Lamar Jackson being a part of the rushing attack featuring Gus Edwards and J.K. Dobbins, Ingram’s attempts, yards, and yards per attempt, all rank fourth on the squad.

We’ll see how it plays out for Ingram. Was this a veteran’s week off? Do they want to keep a back with fresh legs in the event on Edwards or Dobbins goes down?

After the season, Ingram would enter the final year of his three-year contract. He would earn $6.3M in 2021, but if released or traded, $1.3M would count against the Ravens cap in dead money and they would save $5M that they could allocate elsewhere. Ingram’s future here looks to be over, but there is still opportunity this year, and we’ll remember how key he was in the record setting rushing attack from 2019 if indeed this was it.

Great game to get the defense healthy.

Calais Campbell, Marcus Peters, and Jimmy Smith all carried the questionable tag this week, but were ruled inactive at the 11:30am deadline. Did they need a top defensive lineman, starting corner, and slot corner active to handle the Jaguars? Apparently not. Might as well use the game as a time to get some guys back to 100%.

The next two weeks are two games (vs. NYG, @ CIN) the Ravens should continue to handle their business. If they do, they will play in the postseason. Having your full complement of starters that haven’t landed on injured reserve, in peak shape, will be key for that.

Small sample size. Garbage time for sure. But some high praise about this guy according to the commentators. Ravens felt like they had to “hide this guy” on the practice squad so he wouldn’t get taken by another team. Lamar Jackson vouched for him having known each other from their times playing high school ball in Florida.

He wasted no time showing his athleticism which is better than Trace McSorley’s and far better than Robert Griffin III at this point.

From a game that you don’t want to read much into given the opponent, it was interesting to see what a fresh face could do. The athleticism isn’t a product of the opponent. That’s Huntley, and I could live with what he flashed, for now. Perhaps we get an actual preseason next year and see how he looks throwing the ball, playing a couple quarters against guys trying to make their teams, not a checked out, down 33 on a 1-12 team. But I like the athleticism, independent of the other variables.

We’ll get to look at the Giants tonight when they face the Browns on Sunday Night Football. They appear to be without Daniel Jones due to hamstring and ankle injuries. We’re never sure which Browns team will show up. How do they rebound after a heartbreaking loss? Fall flat and the Giants take advantage?

Giants are 5-8 with a win against the Seahawks. Their only signature win of the year, if you don’t count two against Washington. But they are playing tonight with the ability to take the division lead back from the Football Team, via tiebreakers.

Their defense is pretty good and should give the Ravens a better game than Jacksonville. They have something to play for after all. But the offense is only trailed by the Jets for worst in the league in yards and points per game. If the Ravens defense looks like the swiss cheese it did in Cleveland, we have a problem.