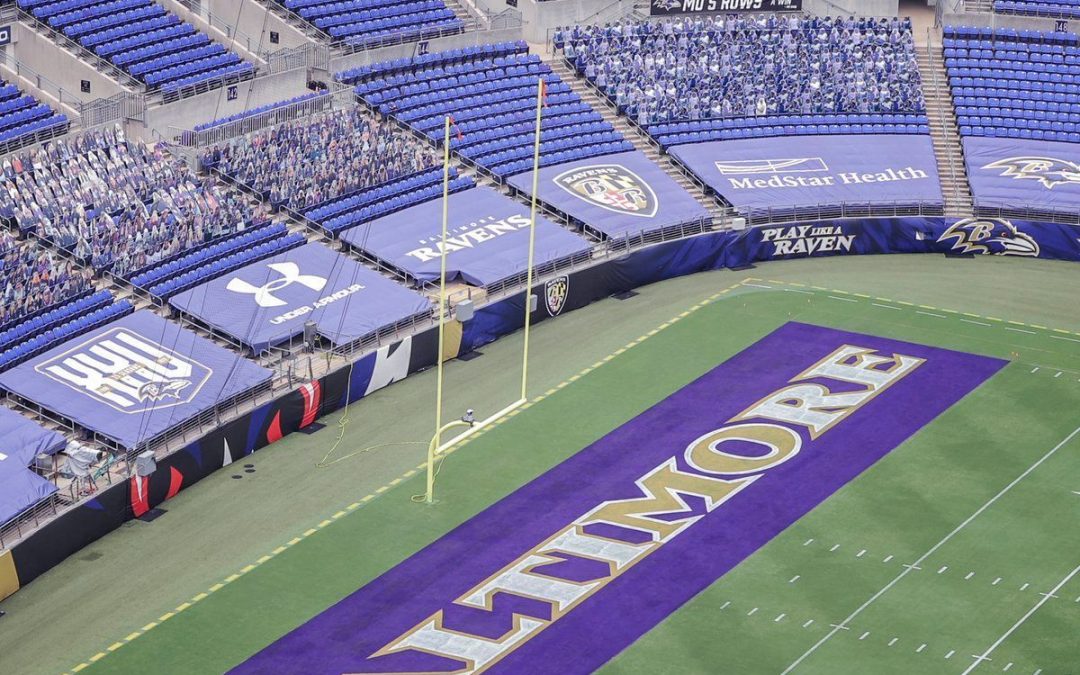 There are many social issues that are going to define this NFL season. But one thing the Ravens, and the city of Baltimore get to celebrate on their own is the life of Mo Gaba. Taken far too soon from us, the Ravens and Orioles 14-year-old superfan was a bright, shining star in the community as a caller, and later host on 105.7 The Fan. He lost his lifelong battle with cancer in July. The “Mo’s Rows” campaign and the Ravens painting in gold the “MO” in “BALTIMORE” in the endzone, keeps the honors coming for that tough young man. Mo should be a role model of kindness for all of us.

Gaba announced the 2019 Ravens 4th round pick in braille and was inducted into the Orioles Hall of Fame over the summer.

Offense doesn’t miss a beat, but concerns could be coming.

It wasn’t the 59-point explosion to open the 2019 season. But a game you’ll take every time out for sure. The reigning MVP, Lamar Jackson, goes 20/25 for 275 yards (11.0 Y/A), and 3 TDs. 7 carries for 45 yards. His favorite targets were Marquise Brown and Mark Andrews who each picked up 5 catches on 6 targets for 101, and 58 yards respectively. Andrews the red zone target with two scores on the day.

The 38-6 rout makes for the first time in NFL history a team has opened up the season with a 30+ point victory three years in a row. It’s also the Ravens 13th straight regular season victory.

Rushing left a little to be desired as he rushed 23 times for 88 yards if you don’t count Lamar Jackson’s attempts. No Marshal Yanda this year could be a big difference. Awaiting to here about Ronnie Stanley’s ankle injury which would be another huge blow if it’s serious.

Dear Browns. You keep doing you. It’s great…for us.

Won’t be shocked if Kevin Stefanski doesn’t survive the year. The offensive “firepower” and the accumulated high draft picks over the years, and they have nothing to show for it. It’s now 16 years straight where Cleveland has lost on week 1. Haven’t had a winning season since 2007.

They went Interception, fumble on a fake punt attempt, then scored a TD but missed the extra point. Then missed a field goal. Sacked on 4th and 4. Fumble. Delay of game on 4th and 1, then air mailed the 4th and 6 pass. They are who we think they are. Hot garbage, again.

Odell Beckham with 3 catches on 9 targets. Mayfield forcing it to his most outspoken, diva like, receiver. Should be another fantastic season for the factory of sadness.

For the rookie’s sake, I was worried about no preseason games

I was worried about first round pick Patrick Queen being thrust right into the starting role without some dress rehearsals. He ends up picking up a sack where he ran right past Joel Bitonio, and later a forced fumble with aid by L.J. Fort.

Wanted to see a positional battle between J.K. Dobbins, Gus Edwards, and Justice Hill for the RB2 spot. Hill was inactive, and the rookie Dobbins was on the field more than Edwards. He ended up with two rushing touchdowns, each a little different on the day. He used his speed to gain the edge on the first score, and patience to see the gap open up on a goal line carry for the second one. His final line was. 7 rushes, 22 yards, 2 TDs. Gus Edwards continues showing his burst by getting the Ravens out form the shadow of their own goal post, and 43 yards on his 4 carries.

Preseason also provides a tryout for special teamers. Who can catch a punt is something often not answered until a few weeks into the regular season. James Proche made a poor decision to call “poison” on a punt, letting it drop around the 20, and it bounced all the way to the one. Ravens ended up having to go 99 entire yards for their touchdown which seemed to come easy on the day in the blowout. On an identical punt later, he would return it for decent yardage.

Verdict: Parts of the game looked rusty. I don’t think we need four preseason games. But two I think would allow for some teachable moments that won’t hurt your record. Excited to watch Queen and Dobbins develop as the year goes on.

Look ahead at the Texans

Houston is coming off a Week 1 loss Thursday night at the Kansas City Chiefs. The numbers say Deshaun Watson had a decent game, but the team also was down 24-7 in the middle of the 4th quarter when he made a Boller-esque desperation throw that would be an interception. The 34-20 final is more respectable then how the game itself actually unfolded.

Bill O’Brien is not a good head coach, and the Texans fans and Houston media have to be talking all week about what if DeAndre Hopkins was still there.

It was a highly anticipated game when the Ravens hosted Houston here in 2019 and they made short work of them in that Week 11 matchup with 41-7 victory. Watson was a complete non-factor in that game going 18/29 for 168 yards and 1 INT, sacked 6 times. 3 rushes for 12 yards.

However, the Ravens are known to have a stinker game or two early in seasons. Could it be next week? The same Browns I just talked down to, came in and embarrass the Ravens last year. If you watch the NFL, you know anything can happen.