Ravens Lose In Buffalo; Quick Takes The Morning After 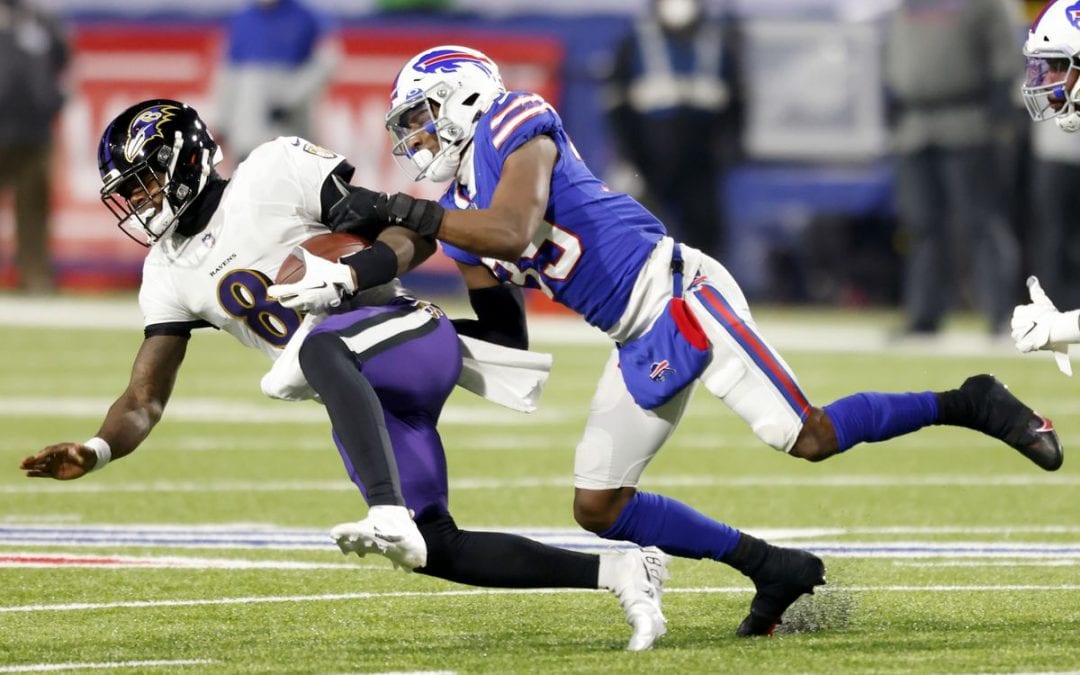 For the second consecutive season, the Baltimore Ravens saw their season end in the Divisional Round, as the Ravens lost 17-3 last night in Buffalo.

Any loss would have been tough. It’s a disappointing and empty feeling for Ravens fans this morning knowing there were numerous missed opportunities. Or more directly, that the Ravens again played poorly on a large stage.

Where do the Ravens go from here?

Before you move forward, you always have to look back and evaluate where you are.

Since Lamar Jackson became the Ravens starting Quarterback (Nov. 18th, 2018), Baltimore has gone 31-8 across 39 regular season games, and 1-3 in the postseason.

In this 2020 season, the Ravens were one of three AFC North teams to reach the playoffs, and Baltimore led the league in point-differential for the second straight year.

During this year, the Ravens lost Ronnie Stanley, and Nick Boyle. They also dealt with Mark Ingram getting old in a hurry.

When the Ravens start the self-evaluation process, and begin looking at the offense; I think the conclusion has to be what exists is not good enough vs. quality teams.

There are a myriad of disappointments from last night. One of them is that an underwhelming Bills defense constantly had the Ravens playing behind schedule. As we all know, the Ravens offense is not built to overcome that. Give the Bills, and their Defensive Coordinator Leslie Frazier some credit for their speed, and scheme last night. But mostly point fingers inward. For the third straight year, the Ravens lost a post-season game with their offense sputtering.

1) I wrote about wanting the Ravens to draft Lamar. I wrote about believing in his abilities, and I wrote about wanting to have a QB on his rookie contract – allowing you to build a stronger team around him. I thought Jackson would be a productive pro. He took a much larger leap in Year 2, than I anticipated. I expected him to become a guy you could win with, I didn’t expect him to become the Ravens best player, and one of the league’s best. Year 3 was up and down. I think Jackson was clearly dealing with the groin injury he suffered in August, early in the season. As he became healthier, and the Ravens allowed Jackson to be Jackson; the numbers improved.

Jackson is everything you could want as a fan. He works extremely hard. He doesn’t point fingers. He competes. His teammates point to his leadership. There is a good chance the Ravens and Jackson will come to an extension this off-season, and I’m good with that, if it happens – for the reasons mentioned above. I’d be lying if I said I had no trepidation though. If you aren’t Mahomes, I’m lukewarm in general in giving any QB the dollars they command, for the pressure that puts on the rest of the roster. Part of me would rather see quality and depth up and down the roster, and go with the next rookie, or some type of stop-gap option. The questions amplified for me, given Jackson’s game. Jackson is a damn good QB, and the Ravens best player; but it can’t be argued that a lot of his value is tied to his legs. There has to be some worry about what happens to his overall game when one day he no longer has the other-worldly athleticism he has today.

Still – and ultimately – Jackson’s body of work (not just his on-field production, but his work ethic, leadership, etc) demands an extension at dollars right at the top of market (outside of Mahomes).

2) Jackson didn’t play well last night, and the narrative that he isn’t a big-game player is going to exist until and if he shows he can win significant postseason games. I think going into these playoffs, that narrative was a bit overrated. The loss to the Chargers in the ’18 Playoffs was after him starting the last 7 games of his Rookie year. The Ravens don’t reach the Playoffs that season, without Jackson turning the Ravens around. The loss to the Titans in the ’19 Playoffs again didn’t see the best of Jackson, but he did personally put up over 500 yards of offense. It wasn’t his fault the Ravens couldn’t stop Henry, and the Coaching staff abandoned the run. Here in the ’20 Playoffs, the Ravens would not have got revenge vs. the Titans without Jackson putting on his Superman cape. Last night wasn’t good enough though. You can point at elements, and the surrounding cast; but the Ravens best player wasn’t good enough. Unfortunately there is no do over. The Ravens don’t get to play the Bills again today, and try and force a 2 out of 3. No matter what the Ravens do in the regular season next year, it is going to hang over the franchise and Jackson that they aren’t built for the playoffs. As fans, all we can hope is that it will be used as collective fire, and the Ravens and Jackson will do what is necessary to earn themselves a chance at redemption a year from now.

3) Stanley coming back will obviously help the offense. It’s also obvious the interior of the line has to be addressed. Will the Ravens try and extend Orlando Brown, or will they determine they won’t be able to sign him long-term for the dollars necessary and try and move him?

4) After 6 TD’s in his last 7 regular season games, Hollywood Brown had a productive postseason. I don’t know that I believe he’s capable of being a true #1, but it was encouraging to see him become more consistently productive down the stretch.

5) Miles Boykin had his 4 TD’s in the last 7 regular season games. There were some signs there. Overall though, he finished his Sophomore campaign with just 19 catches. If the Ravens are going to run things back with largely the same cast, Boykin has to make a large leap in Year 3.

5a) Duvernay flashed at times as a Rookie. KR for a TD, 20 receptions, some gadget plays. He’ll need more time. Proche finished his Rookie season with 1 catch, and being deactivated the last few weeks. Willie Snead is a Free Agent. Dez Bryant had 11 targets after joining the Ravens, 5 of them coming in his first game.

6) The Ravens have to find a veteran WR target that is capable of moving the chains.

7) We said it before the season after the trade of Hurst; the Ravens 2019 offense often featured 2 TE sets. If you want to regularly utilize 2 TE’s, you need at-least 3 on the roster you feel good about. Losing Boyle during the year hurt. You lost his blocking, and another safety net. Getting him will help. The Ravens need to add a 3rd TE to him and Andrews that they feel good about.

8) Dobbins averaged a ridiculous 6 yards per carry on 134 attempts as a Rookie. He’ll be picked by everyone to have a huge Year 2 breakout. Years ago, Ray Rice went from 107 rushing attempts as a Rookie, to 254 runs in his second season. Rice also went from 33 receptions to 78! In Dobbins Rookie year, the Ohio State product had 18 receptions. Expect that number to also dramatically increase next year.

8a) Gus Edwards is a Restricted Free Agent. What qualifying offer will the Ravens place on him? He fits this offense perfectly, and he averaged 5 yards per carry for the third straight year in ’20. He needs to be back.

9) It’s expected the Ravens are going to lose Matt Judon. He’s a good, not great player that the Ravens won’t be able to pay. He’s replaceable, but it shouldn’t be just dismissed as a nothing loss either. Judon played 76 games for the Ravens the last 5 years, and had 34.5 sacks. The Ravens have had trouble lining up and getting pressure without scheme help, and losing him doesn’t help.

9a) I would expect the Ravens to prioritize getting a deal done with UFA Yannick Ngakoue.

10) One of the bright spots on the year, was the development of Tyus Bowser. Bowser is also a UFA. There was year-to-year improvement from Bowser over his 4 years as a Raven. I would think DeCosta will make every effort to get Bowser back.

11) What about Derek Wolfe and Jimmy Smith? My sense is both will be back if they want to.

12) With a full off-season of camps, weight gain; what development do we see from Patrick Queen in Year 2? I’m expecting Malik Harrison to also be ready for more time.

13) Justin Madubuike had a quality Rookie year, and made the DT rotation stronger.

14) After cutting Earl Thomas in late August, the Ravens rolled with Safeties Chuck Clark and DeShon Elliott. I’d expect the Ravens to add some young depth behind them. Elliott is a hitter. How did the Ravens grade the duo in coverage?

15) Tavon Young had a big 2018 season, and parlayed that into a 3 year $25.8M extension prior to the 2019 season. He missed all of ’19 with a neck injury and then suffered a torn ACL early in ’20 (he also had an ACL in ’17). I thought he was excellent in ’18, and I liked the deal at the time, but you clearly can’t depend on him. I did think Anthony Averett was improved this year. The Ravens have two excellent CB’s in Marlon Humphrey and Marcus Peters. And for the games he’s available, Smith is still very solid. But the CB depth needs to be improved.

16) What Coaches are going to be poached? CBS Sports is reporting that DL Coach Joe Cullen is likely to join Urban Meyer as Defensive Coordinator in Jacksonville. LB Coach Mike MacDonald also is drawing interest. At the Coordinator level, I think both Don Martindale and Greg Roman figure to be back. Might the Ravens bring in some Passing Game Coordinator to pair with Roman? Should Harbaugh be thinking of larger changes to his staff?

As a fan, one of the things you respect about the Ravens organization, is that they regularly put themselves in the hunt. They are competitive annually. That’s a credit to the organization as a whole. It’s also a credit to the organizations success, that they – and their fanbase – is not satisfied with being one of the best 8 teams in the league. This is a team, and a fanbase that wants hardware. There is going to be ton of pressure on the 2021 Ravens to do what is necessary to get back to the Playoffs, and break through. The window is not closed, but everyone in The Castle is going to feel a target on their back for the next year. The work on getting back to the postseason, and thoughts on the ’21 season unfortunately begin today.