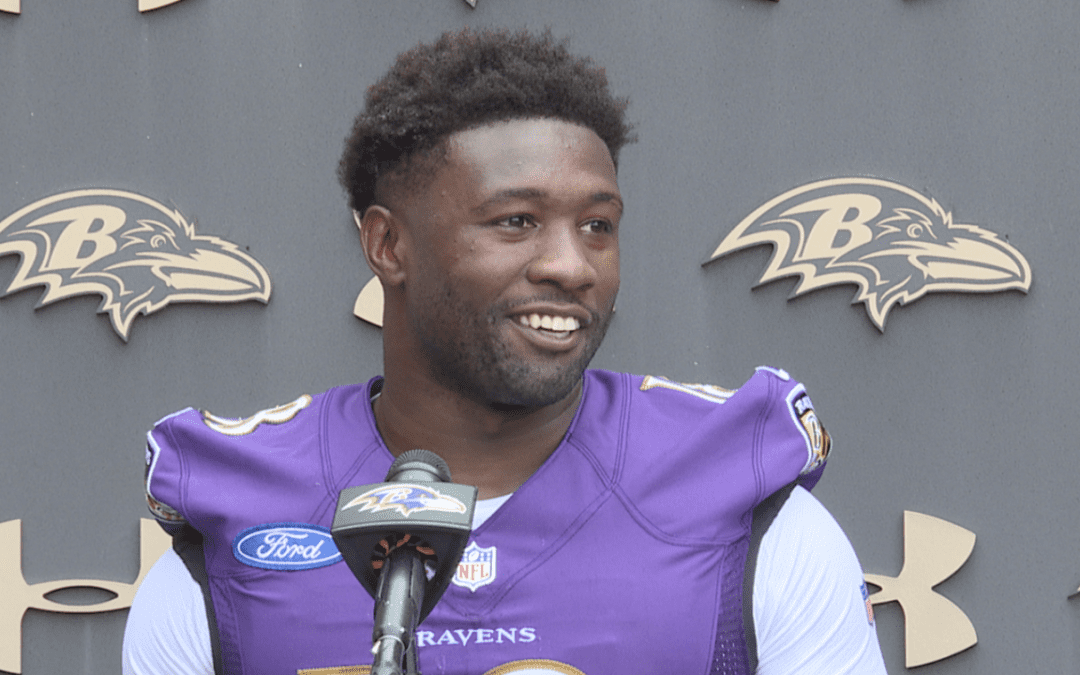 After examining the offensive grades a few days ago, let’s take a look at how the defensive side of the ball has been playing this season. The defense struggled in the early parts of the season but have really stepped their game up over the last several games. They have held their last 6 opponents to under 24 points or less and have been one of the best teams in the league at takeaways. Below I will highlight each player and where they grade amongst their peers via Pro Football Focus.

(* indicates player did not have snap minimum to qualify amongst players)

Pierce was leading the way for this group before suffering a torn biceps that will cost him the remainder of the season. It is unfortunate for the former undrafted star as he was having one of his best seasons of his career. But fortunately for the Ravens, they are very deep at this position. Campbell is having yet another good season, his 77.2 grade is good for 15th best in the league among 122 qualified interior defenders. The veteran just never seems to slow down, his recent 89 pass rushing grade vs the Saints was his highest of the season. Right behind him is rising star, Madubuike. The former Aggie has been very consistent as a pass rusher, he has 19 pressures and 4 sacks on the season and has also been stout against the run. He is having easily his best season so far as a pro and he’ll look to continue the dominant play into the second half. Broderick Washington has also done a nice job for the Ravens. He has 4 game grades above a 70 overall which is notable because through his first two seasons, he has had only 1 game over a 70 grade. His 66 overall grade is very good considering his rookie season where he managed only a 30 overall grade. It is hard to replace Pierce, but Washington has been very solid in the middle rotating with Campbell and Madubuike. Jones has been adjusting to NFL life slowly and steady. His 57.1 is not great but he has flashed at times as a pass rusher and should only get better over time just as Madubuike and Washington have. He only has 84 snaps on the season due to an injury that caused him to miss the first two games. Mack and Urban are role players on the defensive line but give the team much needed depth if something were to happen to the guys ahead of them. Both have been with the team for multiple seasons and play their role nicely when asked. All in all, this is one of the deepest groups in the entire NFL. They have 3 guys ranked inside the top 40 which is tied for the most with 5 other teams. They’ll need the dominant play going into the colder months of the season and hopefully into the playoffs.

The ageless wonder, Houston leads this group as the highest graded player. His 78.6 grade is good for 22nd in the league among 119 qualified players. He is currently 4th in the league with 8.5 sacks only behind former Ravens, Matt Judon (11.5) and Za’Darius Smith (9.5). Nick Bosa is tied for third with 9.5 sacks. The impressive thing with Houston is he has only played in 6 games. Out of the 6 games he’s played, 3 of them saw a pass rushing grade of over 70. He also has snagged an interception this season. Houston is also their highest graded run defender amongst the group as well. On the other hand, Oweh has been underwhelming to say the least. His 55.6 grade is ranked 100th out of a possible 119 players. He only has one sack and only one game above a 70 pass-rushing grade. His run defense has also been a problem. His run defense grade sits at 48.2 which is ranked 107th out of 124 eligible edge defenders. Oweh is still young and learning but fans really want to see more out of the former first rounder. He’ll look to have a better second half of the season. JPP had a solid game against the Bengals in which he swatted two passes and added a sack. Outside of that lone game he has been a non-factor. Ojabo is set to make his debut against the Panthers and will look to add some juice to the pass rushing unit. Bowser made his debut vs the Saints and added two pressures. With the solid play of Houston and the return of Bowser, this unit should be much better going into the second half of the season. If the team can get better play from Oweh, then this pass rushing unit can really be a huge factor going into January.

Though the grades seem low, this unit has played much better over the past few weeks. Queen’s last 4 out of 5 games have seen him grade 76 or better. Smith’s lone game with the Ravens saw him grade out at 82.6, which was his second-best game of the season. Harrison has been the highest graded player of this group but he has seen significantly less snaps than Queen and Smith. But nonetheless, he has been playing the best football of his 3-year career. Bynes has surprisingly graded poorly this season. Outside of his outstanding week 3 game vs the Patriots where he had a 91 overall grade, the other 6 games saw him grade below a 60 overall. Off-ball linebacker is one of the toughest positions to play in the NFL as evidenced by the PFF grades. Only 7 linebackers are grading over an 80 overall. QB’s tend to target them as they are usually caught in the slot vs a shifty slot WR or skilled tight end. This group still needs time to gel, and adding a player like Roquan Smith into the fold has already paid dividends through one game. Fresh off of a bye this unit will face off against Baker Mayfield, PFF’s lowest graded QB.

(* indicates player did not have snap minimum to qualify amongst players)

Humphrey ranks as the highest graded player amongst the corners. His 71.4 grade is good for 26th among 116 players. His man-coverage grade of 89.4 ranks second among 126 qualified cornerbacks. He has only surrendered 271 yards this season into his coverage and has not had a game in which he has allowed more than 50 yards. Ironically, His run defense grade of 43.5 is actually the lowest of his career but no one is questioning the importance of Humphrey to this unit. Humphrey is one of the best corners in the league. Peters is coming off of a major knee surgery and has had an up and down season thus far. His coverage grade sits at 60 which is not awful, but his tackling run grade has been abysmal. He has a 20% missed tackle rate which is among one of the worst percentages for a corner this season. He has allowed 3 touchdowns on the season and opposing QB’s have a 110 QB rating when targeting Peters. He’ll need to improve but is still a very important piece of the defense and can change the game at any time with his ball-hawking ability. Stephens and Williams have not been good this season. They rank as the 97th and 111th ranked corners respectively out of 117. Stephens has been a solid tackler this season but a liability in coverage. He only has one game above a 60-coverage grade. Williams is a rookie and is still adjusting to the speed of the NFL. He has been a solid run defender but has been getting torched in coverage. QB’s have a 129 rating when targeting the rookie slot defender. He’ll look to take advantage of the Ravens weak schedule coming up and hopefully improve a bit vs some low graded QB’s. Armour-Davis has only appeared in 3 games and he has been lit up for 152 yards and a touchdown on only 32 coverage snaps. He has been a healthy scratch as of late but will need to earn the coaches trust to earn any significant playing time going forward.

This is the team’s best overall group in terms of PFF grade. Hamilton is the 4th highest graded safety in the league. He has been as good as advertised going into the NFL draft. A true Swiss army knife for the position, Hamilton stands at 6’4 220 pounds and can play all over the field. He has 67 snaps in the box, 86 snaps at free safety and 78 as a slot corner. He graded well in both the run and pass but has been excellent in coverage. He is coming off of 2 straight games over an 82-coverage grade and nearly got his first interception of the season vs the saints, but was called back due to a questionable defensive holding penalty. Hamilton missed two tackles in the opener at the Jets, but has had only one missed tackle since. The Ravens have had a long list of elite safeties and Hamilton looks like another gem for the franchise. Geno Stone has been nearly as good as Hamilton this season. His 80.8 grade is 6th among all safeties. His coverage grade and run defense grade are both sitting at 79. Similar to Hamilton, he can do it all but is mostly used as a free safety as he has 178 snaps there compared to 42 box snaps. The du have filled in nicely for Pro-Bowler, Williams. Speaking of Williams, he is PFF’s 20th graded safety and was leading the league in interceptions before going down with a wrist injury. He is expected back sometime this season. Last but not least, Clark. Clark is a defensive captain and is an integral part of the defense as a whole. But he has had a down year, his 59.7 grade represents his lowest grade since 2018. He has mostly struggled in coverage but is having his second-best season in terms of run defense. I would not worry too much about Clark. He is an excellent leader and the coaches trust him. His PFF grade will surely improve going down the stretch.

You don’t need PFF grades to tell you that Tucker is the league’s best kicker. Simply the best to ever do it and proving it once again this season. Stout’s grade of 67.4 puts him right in the middle among punters. His average yards per punt attempt is 48.8 which ranks 9th in the league. Otherwise, most of his other stats rank in the middle of the pack. Still only a rookie, his looks like a rock-solid punter for years to come. Devin Duvernay is the only player in the NFL with a return TD this season. His 81.4 grade ranks first in the NFL among 50 eligible returners. Harbaugh is a former specials teams coach and the Ravens always seem to be solid in that department. Zero worry going forward from this elite unit.