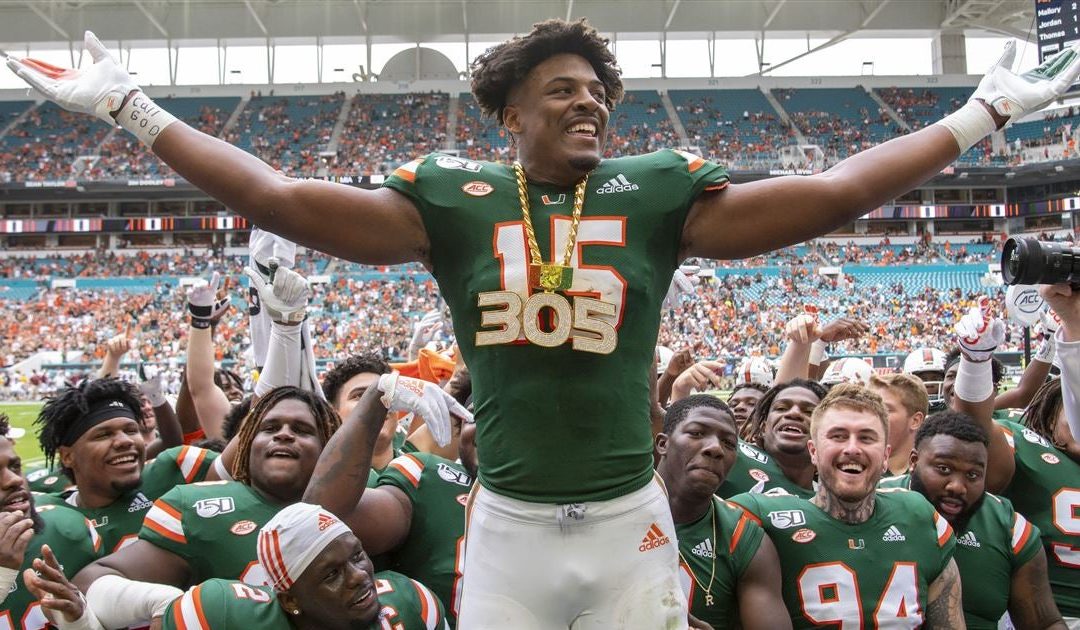 Edge rusher might the most important position of need when draft day comes for the Ravens. There is still free agency to go through, and maybe the Ravens upgrade there making interior O-line or WR next up on the wish list to spend a first-round draft pick on. But with Matt Judon definitely on his way out after the past weeks twitter battle with a beat reporter, and no signals of trying to extend Yannick Ngakoue, that leaves the position pretty bare. Tyus Bowser and Pernell McPhee are also free agents to be, meaning Jaylon Ferguson is the lone edge rusher with a 2021 contract, and he was a healthy scratch in games down the stretch in 2020.

With that, I’ll look to highlight three edge rushers the Ravens could target, across multiple articles. This will be a fluid situation as more reports surface about prospects from pro days, who meets with which teams, who climbs or falls mock draft boards. Mock drafts could also be wildly off as we don’t know if teams will devalue players who opted out of the 2020 college football season.

Video: vs. Minnesota, vs. Penn St.

Video on Twitter of Paye running a 6.46 second three-cone drill has me salivating. No one at the DE or OLB position has posted a time near that at any NFL combine. 6.64 seconds being the best time I can find. The agility here is off the charts, and the three-cone drill is a great indicator of a player’s acceleration while staying low, body control while changing direction, and sinking your hips to turn on a dime.

I can’t wait to see more measurables of his become public once Michigan’s pro day starts on March 26th. In high school, Paye was a state champion on the 4x100M relay team and was a state champion long jumper at 21 feet 5 inches. I love “explosion score” as one of the metrics to measure edge rushers by. Bench press reps + vertical jump in inches + broad jump in feet. If Paye jumps off the page explosively, with that kind of agility, he could be a special kind of player.

He played in four games for Michigan in 2020 with a team best four tackles for loss and two sacks. Averaged about a tackle for loss per game and notched 11.5 sacks in 28 games in his four years as a Wolverine. He’s a three-time member of the All-Big Ten Academic team and was named team captain in 2020.

Mel Kiper’s mock draft has him coming off the board at number 23, but CBS Sports has him going as high as 14.

Going forward, important to note that Mel Kiper feels like the edge rushing class is deep but lacks high end talent. His mocks have those players going late first round, while other publications have them mid-first round.

Being 6’7” will get your attention. Long, lean frames like Jason Taylor, more recently Chase Young come to mind.

The word you see among many reports on Rousseau is “raw”. He’s only played 546 snaps in college. His size allows him to win against amateur linemen. He’ll need to develop some more fundamentals to win at the pro level. He’s 6’7” and plays every bit of it, rarely getting low, and rarely winning on the edge. But rushing to the interior of the line is where he has more success. But if he allows professional lineman to gain leverage, it will be tough sledding for him as he won’t be able to bully his way through.

He does appear light on his feet for 6’7”, looking nimble, and not getting caught up in traffic in the trenches. He gets his sights set on the QB, will slip in wherever the hole in the offensive front is, and has great closing speed to finish.

He is listed in mock drafts anywhere from #15 to #21. Daniel Jeremiah of NFL.com believes Rousseau has perennial All-Pro ability.

Coming out of high school in Redlands, CA, Phillips was a five-star recruit, and the number one outside linebacker prospect in the country according to EPSN’s recruiting rankings, and number three overall. Rivals ranked him number two.

He went to UCLA where he played as a true freshman, then started in his sophomore year before a concussion end his season just four games in. He transferred to Miami in 2019, and in 2020 finally showed off why he was so highly sought four years prior, notching 8 sacks, 15.5 tackles for loss in 10 games. Not to mention three passes defensed, leading to awards as Coaches first team All-American, and AP second-team All-American.

Between UCLA and Miami, he actually quit the game. Concussion, ankle injury, a broken wrist in a moped accident, Phillips then hung it up, enrolling at Los Angeles Community College.

Phillips is a playmaker against the run and the pass and looks like he would be scheme versatile. But like Rousseau above, his pad level is pretty high, and that could be exploited at the next level. Although on the edge he’s got good hip bend to be disruptive in the backfield.

All three of these guys are capable of being the first edge rusher off the board. I feel like Mel Kiper may be one of the lone wolves in not having any edge rushers in the top half of his mock draft. Even if he thinks the talent isn’t elite, it’s still a position of value. Quarterbacks, offensive tackles, and edge rushers are the highest paid positions, thus, are the highest priorities. Getting a Chase Young type at the edge rush position on a rookie contract price tag is the defensive equivalent of landing Lamar Jackson or Patrick Mahomes for a fraction of the price of seasoned veterans.

I don’t expect that these three will fall to 27. But if they fall to 19, 20, I’d start getting on the phone and try to move up. Picks 21, 22, 23, and 24 belong to the Colts, Titans, Jets, and Steelers respectively. Those first three with major needs at edge rush as well, plus the Steelers who are likely to lose some key pieces under their tight salary cap situation and could use the pick to help themselves and block their division rival Ravens simultaneously.