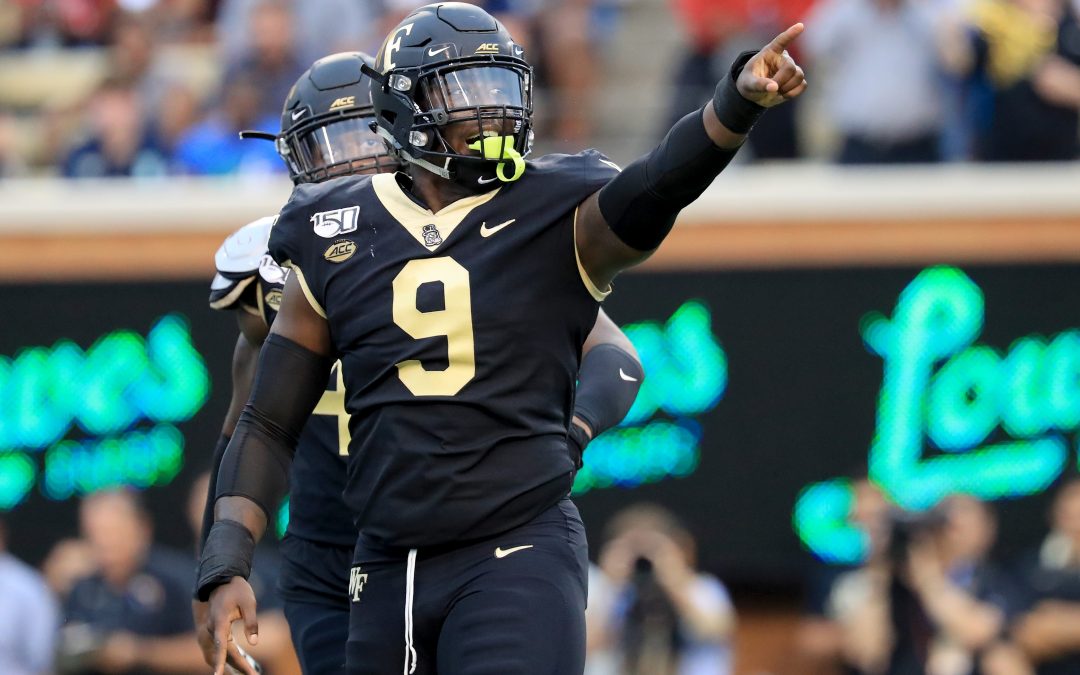 Just like that, the draft is just about two weeks away. Pro Days for prospects have wrapped up just a couple days ago. Plenty of free agents remain on the market as team analyze their restricted salary cap situations. Some major moves going on impacting the top of the draft board with San Francisco trading up to the number three spot, and the Jets trading Sam Darnold to the Panthers, meaning the first three picks off the board will likely be QBs.

Quarterback isn’t a position of need in Baltimore, but edge rusher is. In this third installment, I’ll look to highlight three more edge rushers the Ravens could target, still holding the 27th pick in the first round.

In my first look at the position, I highlighted three guys that mock drafts had just out of reach for the Ravens at pick #27, but not too high up that they couldn’t trade up to get their guy. Or, not too high that they couldn’t possibly fall to #27 as the board shakes out on draft night. Those were Kwity Paye (Michigan) and a pair of Miami FL guys, Gregory Rousseau and Jaelan Phillips.

In my second look I took a look at guys who mock draft had falling right around #27 or sneaking up into the first round after not being there in previous mocks. They were Azeez Ojulari (Georgia), Jayson Oweh (Penn State), and Ronnie Perkins (Oklahoma).

Low and behold, as the landscape changes seemingly daily, every single one of these guys, according to at least one major outlet’s mock draft, could fall to the Ravens.

Today, in the final installment before making an edge rusher “big board”, I’ll look at three more guys who are showing up in some mocks at the end of round one, or not showing up until round two where you know the Ravens love to trade down and still land their guy, and a bevy of picks.

Discuss your thoughts on these prospects on our message board.

Tryon opted out of the 2020 season. Not going to blame anyone for doing so. But he looks like some more experience may have risen his draft stock before turning pro.

Physical tools that you want to see. But he tips his hand when he’s going to rush. Digging his cleats in to get good grip for that initial push off. He also often lines up real wide in a 9-technique to allow for more of a running start. He may not always that luxury though.

He’s got a bullrush that with an extra step or too to load up can get a tackle on roller skates. He also saw a lot of double teams in the Apple Cup game with the rival Cougars. Testament to his ability perhaps? Ability that still need polishing though. Doesn’t shed many blocks.

Giant red flag for me is I wonder if he might shy away from contact at times. There is a play in the Boise State tape where they run a jet sweep away from Tryon. Tryon gives chase, and the ball carrier has to change direction as the blocking breaks down. He cuts back in Tryon’s direction briefly. Tryon has him dead to rights, could blow up the ball carrier who is looking up field, not to his right side where Tryon is coming from. Instead, he pulls up, essentially looks to contain the play, waiting for someone else to come in an and make the tackle. I just hate to see that. You don’t get many looks like that.

“Boogie”, you’ll notice is on the bigger side at 281 lbs. He gets by on power rather than speed, like some of his counterparts that are upwards of 30 pounds lighter. But he brings experience to the table as a redshirt senior and you can tell there is a nasty streak in there somewhere.

I thought it would set the tone for his tape when a few plays into the Clemson tape, he violently slapped the hands of the opposing tackle, shed the block and chased down Trevor Lawrence for a sack and big loss of yards. But that’s where the love kind of ended. While the consistency didn’t show in these tapes, he did record a tackle for loss in 23 straight games in his college career, which was far and away the best in the country when it came to an end.

More often when he was getting blocked, his body positioning was so bad that he would be turned around and not even facing the play. Ball carriers would run by where his back is turned. It’s hard to make a tackle, or find the quarterback, or even effect a play minimally when your eyes are facing the wrong way because you were turned inside out by a lineman.

Wonder if Basham is a tweener at this point. Does he need to shed 20 pounds so he can get his pad level lower, be a little quicker while still heavy handed and not be taken out of plays? Or does he need to pack on 20 pounds and play defensive line where with more mass, he’s less likely to be spun and with his strength, collapse the pocket a little.

Let me preface this by saying Collins isn’t an edge rusher. But could be one on any given play. He plays outside linebacker, but like and inside linebacker. He would be more than capable of wearing the green got on his helmet and making the defensive calls. But his size suggests he could also excel in the edge rushing department.

Collins is without a doubt the most decorated defender in the draft. Ngurski Award winner. Bednarik Award winner. First team All-American. AAC Defensive Player of the Year.

Collins plays with an ability to read and react that looks advanced for his level. He’ll be rushing off the edge, see it’s a screen, and back off in order to disrupt the pass. He’ll sit in zone coverage, or as a spy, see the play is going to be a handoff, and with no receiver in his vicinity should it be play action, takes off, finds the hole in the line, and brings down the ball carrier for a loss in the blink of an eye. Produced a safety in this situation in the UCF game.

I think Collins could be a fit on this Ravens team as a guy that can do multiple things. When Don Martindale draws up defensive fronts where the quarterback can’t tell who is blitzing and who is dropping into coverage, Collins would be the perfect camouflage. But if he blitzes, he probably creates pressure. If he drops into coverage, he probably disrupts the pass. In a base 3-4 as an inside backer, he could take some pressure off of Patrick Queen. He’s instinctual enough to create pressure up the middle, so he doesn’t always have to line up against the opposing tackles.

Baltimore Ravens columnist John Eisenberg noted recently that edge rusher doesn’t have to be a need because of the way the Ravens generate pressure in other ways. If you’re good with that, Collins is your guy who won’t fill the stat sheet in one column, but spread it out in all the columns. Instead of 10 sacks, 35 tackles, he could give you six or seven sacks, and 100 tackles, and a few interceptions, and a handful of pass breakups.

There is a reason these guys are only showing up in the first round of just a couple of mock drafts here and there. Of the last of the bunch, Zaven Collins looks the most likely to make an impact wherever he goes. It’s possible a team with a top five pick hits a homerun in round one, then nabs Collins early in round two which could prove to be incredible value.

I’ll go into more detail when I make my big board out of the nine players at the edge position (or eight, and Collins). But I’m pretty confident Tryon and Basham won’t be sleepers or crack the top three.

I can certainly see why some of the top draft experts only have a couple edge rushers going in round one, and mid to late round one at that. There is no Chase Young in this class.