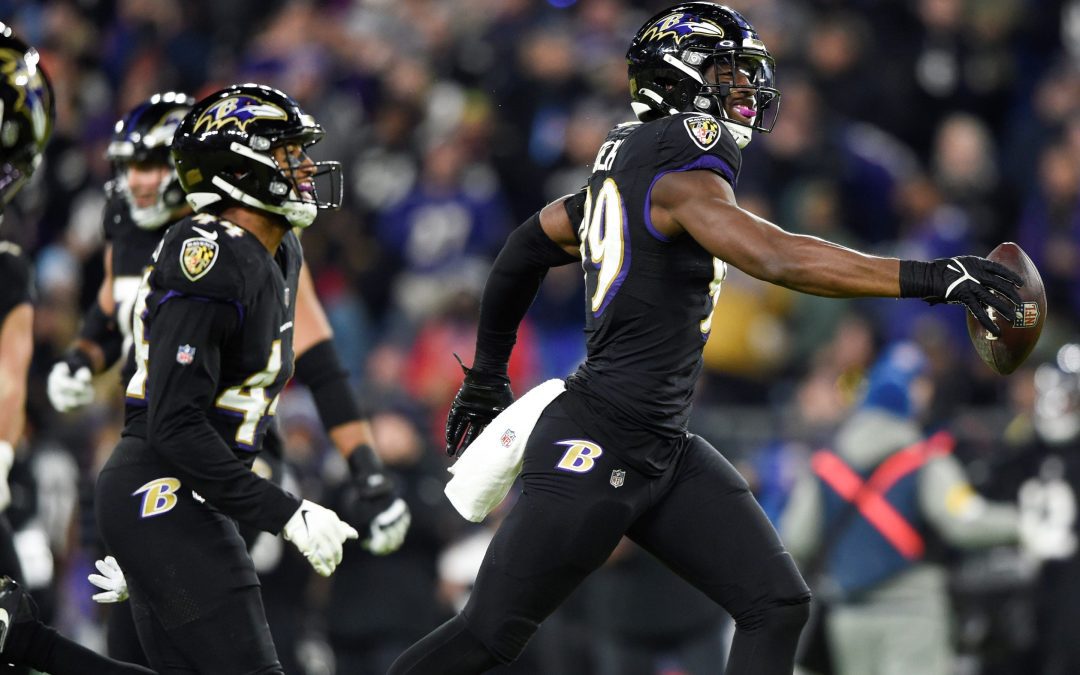 After breaking down the PFF grades last week regarding the offense, which you can read here, I will be breaking down the defensive grades from this season. Like the offense, the defense dealt with just as many crippling injuries before and during the season. Every level of the defense had a major injury which resulted in one of the worst defensive performances in team history. The Ravens led the NFL in 20+ and 40+ yard plays given up, they also were tied for first in yards per attempt given up with 8, and also were one of the worst tackling teams in the NFL according to PFF. They were forced to play guys off the street and some familiar faces (Tony Jefferson). Below I will break down the good and the bad from every level of the defense using Pro Football Focus’ grades.

The Good: Not much good came from this group but if I had to choose one thing it was Anthony Averett’s QB rating when targeted. Averett was targeted 93 times this season but only allowed a 79.1 QB rating. He also had a career high 3 interceptions. Averett was asked to fill a void left by Pro Bowler Marcus Peters and he did a commendable job all things considered. He was highly scrutinized by Raven fans but once he got hurt toward the end of the season, the cornerback room looked much worse than what Averett was putting on the field. Now a free agent, Averett will look to cash in during free agency after having a career year.

The Bad: The explosive plays allowed. As I mentioned in the opening, the Ravens led the NFL in 20+ and 40+ yard plays allowed. They only had one game this season where the team coverage grade was higher than a 75, and that was against the Browns and a hobbled Baker Mayfield. The Ravens desperately missed Peters this season as well. Ravens cornerbacks combined for a grand total of 5 interceptions, 3 were courtesy of Averett. Humphrey had a down season as well, he only forced one fumble and snagged one interception in route to his lowest PFF grade of his career. Young surprisingly was the Ravens healthiest cornerback all season, but he also had his worst graded season of his career. This is arguably the Ravens’ biggest need going into the off-season. They need depth and some injury luck next season if they don’t want to be near the bottom of most major pass defense categories.

DeShon Elliot; 65.6 (unranked due to not playing enough snaps)

Tony Jefferson; 73.4 (unranked due to not playing enough snaps)

The Good: Tony Jefferson’s end of the season play. Jefferson was signed off the street before the team’s week 15 game against the Packers. He played extremely well in the team’s blowout loss to the Bengals in week 16 and then had another good game against the Rams the following week. Though the sample size was small, Jefferson showed he can still play at a high level and also showed his improved skills in the pass defense game as he had back-to-back games with PFF coverage grades of over 80. He technically finished as the Ravens top graded safety due to a small sample size, but it was nice to see Jefferson back on the field with the Ravens after being out of the league essentially for the last 2 seasons.

The Bad: The lack of turnovers created. Clark/Elliott/Stephens combined for a grand total of 3 interceptions. Clark had 2 in one game vs the Rams, Elliott had one, Stephens had 0. This has been a problem for a few seasons now. Since Clark and Elliott have been a starting tandem, they have combined for only 4 interceptions over the last 2 seasons combined. With Elliott set to become an unrestricted free agent, you have to think the Ravens will either draft a safety or pick one up in free agency (Tyrann Mathieu?). Like the cornerbacks, the safeties simply could not create turnovers to give the offense extra possessions. Looks for an overhaul in the secondary this off-season.

The Good: Josh Bynes’ steady presence. Bynes was inserted into the lineup in Week 6 due to poor play from Patrick Queen and Malik Harrison and provided much needed consistency in the middle of the Raven’s defense. He finished the season with 58 tackles and only 8 missed tackle, which equates to a missed tackle percentage of only 8.1, one of the better marks in the league. The veteran wasn’t particularly great in coverage but proved to be a significant improvement over the aforementioned linebackers. QBs were picking apart the middle of the field before Bynes stepped in. Bynes will be 33 at the start of the next season but would still be a vital part of the linebacking core despite his age.

The Bad: Queen’s consistency. Last season, Queen was the second to last graded linebacker in the NFL. He marginally improved this season but he still leaves a lot to be desired on the field. Queen finished 4th in the NFL in missed tackles amongst linebackers with 20. Though it is worth noting that once Queen was moved to the weakside he played significantly better. Queen improved in every area from his rookie season, he missed less tackles, allowed less catches, and allowed less TDs. But even in an “improved” year, he still was not particularly good. He had some very good games with high grades but had more bad games. He had 9 games with under a 50 grade while only having 5 games above a 70. Queen shows his athleticism in games constantly by running down a ballcarrier sideline to sideline or knifing into the backfield for a negative gain, but what fans do not see is his constant inability to shed lineman and being completely removed in the run game. Queen could be a solid player but Year 3 will be huge for him and for the Ravens in terms of their long-term decision at the position.

The Good: Calais Campbell’s run defense. Campbell does not offer much in the pass rush department anymore, but he makes up his lack of pass rush with very good run defense. Campbell was a handful for every interior offensive lineman this season. Though he did not have an eye-popping season in terms of numbers, he was constantly drawing double teams to help the linebackers and other lineman force pressure on the QB or make tackles in the run game. After missing 3 tackles in his first 3 games, Campbell only missed 2 tackles the rest of the season and proved to be one of the most consistent Ravens all year. His 80.8 grade was the highest of any Ravens defender and second overall to only Mark Andrews. Campbell is set to become an unrestricted free agent and retirement could also be a real option for him. Hopefully Campbell can play one more season because nothing suggests he can’t keep his elite play going.

The Bad: The lack of any interior pass rush. Campbell led the interior defenders with 31 pressures, Madubuike/Ellis/Williams combined for 29. Madubuike was pegged as breakout candidate for that role, but only finished with 13 pressures. Williams, who is not known for his pass rush ability only had 10 pressures. The unit as a whole had 4 sacks amongst the 4 players. That type of performance simply will not get it done and I fully expect the Ravens to address this problem in free agency and through the draft. Quarterbacks simply had all day to throw and were easily able to pick apart a depleted Ravens secondary. Good Defense requires good play from every level but it’ll always start with the defensive line, and if you have a bad defensive line, typically you’ll rank poorly in the defensive metrics, which is exactly what happened this season.

The Good: Houston’s/Bowser’s/Oweh’s solid play all season. None of the 3 wowed anyone, but all 3 defenders finished above 40 pressures and all had 5 or more sacks. Oweh led the group in pressures with 49 but bowser led the group in sacks with 8, but it was Justin Houston who led the group in overall grade. Houston, the elder statesman of the group brought consistent pressure all year long, all 3 guys rotated snaps but Houston led the group in win % in true pass rush sets. Oweh started hot but hit a bit of a rookie wall towards the end, but no one is worried about his future. Bowser proved yet again the Ravens made the right decision to extend him last off-season as he provided consistency all season long. Bowser and Oweh will be coming back (though Bowser will be coming off the Achilles injury suffered in the season final) but Houston will be turning 34 and was only brought in on a one-year deal.

The Bad: Jaylon Ferguson’s lack of improvement. Ferguson was expected to take a step forward but never seized his opportunity. The third-year pro failed to record a sack this season after having only 2 the previous year. After investing a second-round pick on Ferguson in 2019, The Ravens have gotten a grand total of 4 sacks in 3 seasons. His time in Baltimore may be coming to an end sooner rather than later. The Ravens are expected to add more edge rushers this off-season considering McPhee and Houston may be lost to free agency or retirement. With Bowser and Oweh being the only 2 young, good pass rushers on the team, expect the Ravens to hit the edge position head on this off-season.