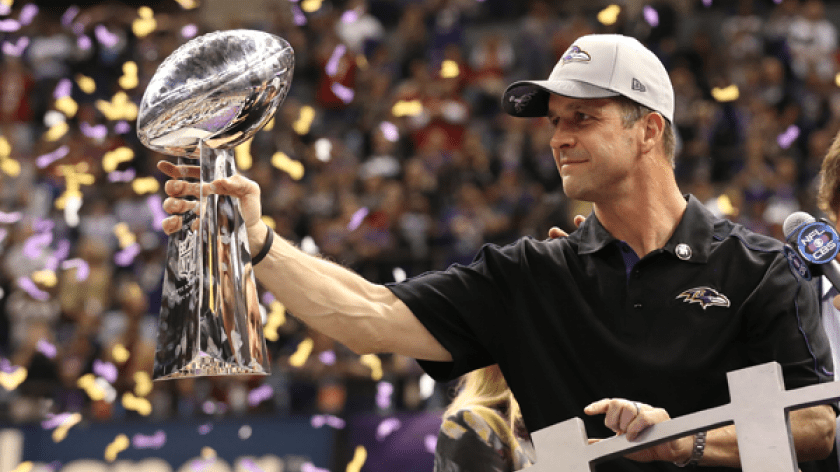 The Baltimore Ravens are no strangers to the playoffs. Though they’re only in their 26th season, their postseason pedigree is one many teams would love to claim as their own.

Under the diligent guidance of John Harbaugh, the Ravens have been to the playoffs nine times in 13 seasons, compiling a postseason record of 11-8. That .579 winning percentage ranks tied for 6th all-time among coaches that have coached in at least 15 playoff games.

It turns out this guy can coach.

Baltimore has proven they make the playoffs and are successful in the playoffs more years than not. Are they a lock to make it this year? Not exactly. Are they trending in the right direction, though? Absolutely.

But what indicators, style of play, and statistical trends did those previous teams display which pointed to their postseason success? Which of those indicators does this 2021 team have that can lead us to believe they will qualify for and advance in the playoffs?

We’ve heard over and over that a dominant run game is a key factor to winning in the playoffs. But is it true?

Establishing a strong running game is vital to long-term success—at any level of football. First, it establishes physical dominance. Second, it allows you to stay “on schedule” in terms of down and distance. Third, being an effective running team allows you to control the flow of the game and gives you more flexibility to adapt to unforeseen situations.

Since 2008, when Baltimore has made the postseason, their average rushing rank was 6th. Currently, they rank 3rd. Though they’ve incurred injuries to the first three running backs on their initial roster, their offensive line has remained intact enough to allow for the running backs they signed to make key contributions in only a few weeks.

Ray Lewis stoning Darren Sproles in the backfield on 4th and 2 from the Ravens 15-yard line in San Diego to preserve a 5-point win in 2009.

Ray Rice scoring on the first play from scrimmage in New England in the 2009 playoffs.

Torrey Smith scoring two touchdowns to help the Ravens beat the Patriots by 1 point just hours after his brother passed away.

Converting fourth and 29 and winning an overtime game in San Diego in 2012, after losing that same game by 20 points a year prior.

The incredible run to the Super Bowl XLVII championship, of course including the Mile High Miracle.

Steve Smith, Sr. catching a deflection for a touchdown in stride, home against his former Panthers team, en route to a key win during the 2014 season.

Basically, every game this year.

You can’t win a world championship without being thoroughly tested. During those special seasons, there are always a few crucial moments that leave you in wonder and seem to be a fluke but spur your team on to greater heights. In short, you can’t win a world championship without having a clutch factor, and it’s safe to say there’s no more clutch team in football than the Ravens.

In the nine years that Baltimore made the playoffs, its regular season road record was 42-30 (.600). To have that kind of success over that period of time isn’t normal. Baltimore has abundantly shown their resiliency in adverse situations with John Harbaugh at the helm. There’s no better way to prepare to win on the road in the playoffs than to do so in the regular season. It gives you confidence to get past obstacles you might not otherwise get past. So much of playoff success is mental and winning on the road gives you tremendous belief in yourself and in your team’s collective ability.

Baltimore’s road record this year: 3-2 (.600), the exact same winning percentage they established throughout their nine playoff years in the Harbaugh era.

There’s a general school of thought that the higher a team’s playoff seed is, the greater their chances are of winning it all. So often teams stress and strain to get the best seed possible, even though history shows top seeds aren’t impervious to an early exit.

In its nine postseason trips since 2008, Baltimore has averaged a seed of 4th. Extra rest is always helpful for sure, but the Ravens are best when playing as an underdog. Not only is their average playoff seed 4th, but that’s the position they held when they won both Super Bowl XXXV and Super Bowl XLVII.

Only twice in franchise history were the Ravens a 1 or 2 seed in the postseason. Their combined records that year:

Here are Baltimore’s playoff records at home and on the road since 2008:

We know the Ravens have more playoff success on the road as opposed to playing at home. So, while earning a lower seed doesn’t seem ideal, it should not be a reason for panic.

Everything a team does matters. If they blow coverages on defense and blocking assignments on offense, one can’t ignore that just because you’ve overcome most of those lapses. Perseverance is necessary to winning a championship, but ideally a team isn’t putting itself in too many precarious positions.

The two most important pieces to a Super Bowl-winning team are chemistry and health. The Ravens ooze chemistry, but their health, while slowly improving, still leaves a lot to be desired.

Currently at 7-3, the Ravens have a great shot at a double-digit win season, which is usually good enough to make the playoffs. The combined record of their five remaining opponents is 32-19-1 (.625). That’s a tough task. Baltimore must play Cleveland twice in three weeks, with a game at Pittsburgh sandwiched in between. They also host Green Bay and the Los Angeles Rams before hosting the Steelers in the season finale.

Nothing about their remaining games will come easy, but Baltimore does tend to play its best football toward the end of the year.

While it’s not an overwhelming feeling, I do have a solid hunch the worst of the Ravens season is behind them. I think they will win out, except for Weeks 15 and 16 when they host the Packers then go to Cincinnati. That would bring their record to 12-5, and a seed somewhere between 2-4.

With the addition of one playoff spot to each conference this year, there’s only one 1st round bye. So, a No. 2 seed won’t earn you a week off, but perhaps the Ravens like it that way.

Baltimore is a very good team that can make a deep playoff run. They’re currently tied for 7th favorite (+1100) to win Super Bowl LVI. They’re 3rd favorites to win the AFC (+450) and the odds-on favorite to win the AFC North (-175).

There’s something undeniably special about this team. They could lose in the first round, but they could also win it all. Here’s to seeing them hoist their 3rd Lombardi trophy on the field at SoFi Stadium in February.

In a season riddled with stress and exhilaration, what an appropriate ending that would be.