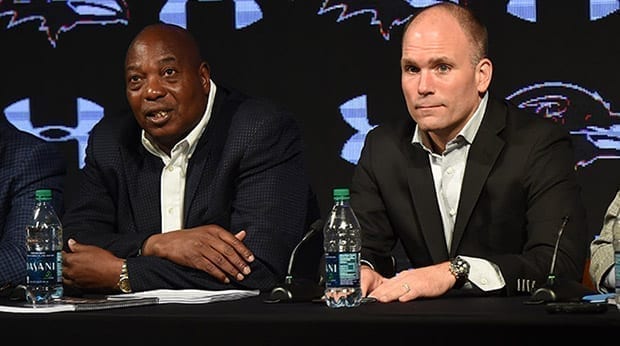 Just days before Super Bowl LII, the Baltimore Ravens made the biggest change to their organization since moving from Cleveland over two decades ago. On Friday, the team announced that longtime general manager Ozzie Newsome will step down following the 2018 season and assistant GM Eric DeCosta will succeed him at the top of the front office.

“I will remain as the Ravens’ general manager through the 2018 season and continue my role directing free agency and the draft,” Newsome said regarding the change. “After that, Eric (DeCosta) will take over as our general manager and assume all duties that come with that, including heading our personnel department and directing free agency and the draft.”

While Newsome’s future as the Ravens’ general manager had become a yearly discussion, DeCosta’s status as general-manager-in-waiting had become one of the worst-kept secrets in the NFL. DeCosta frequently received interest for GM positions across the league, and just as often he turned them down. Most recently, he declined a chance to interview with the Green Bay Packers, widely considered one of the premier jobs due to the lack of a traditional ownership presence. It appears DeCosta knew all along that he could remain in Baltimore and succeed his mentor and made his decisions accordingly.

Though DeCosta will take over the front office, Newsome plans to remain with the team in a different capacity, one that Ravens owner Steve Bisciotti described as “the highest-paid scout in America.” Though that shift in hierarchy seems odd, other teams have attempted to do the same. Just last month, the Packers transitioned GM Ted Thompson into a senior scouting role. Newsome, one of the best talent evaluators of his or any generation, could thrive in a similar role with Baltimore. Doing so could also help DeCosta as he settles into his new position atop football operations.

Still, while few first-time general managers command as much respect as DeCosta, any GM change involves significant risk. As an assistant, he spent the overwhelming majority of his time scouting players, helping the Ravens land field-tilting talents like Ed Reed, Terrell Suggs, and Marshal Yanda. While the ability to identify talent will serve DeCosta well in his new role, he must also balance other difficult responsibilities for the first time in his career. Now, he has to manage the demands and expectations of his head coach and owner as well as run the entire scouting department. Developing those skills requires time, and many highly regarded personnel executives fail to master them. DeCosta appears well suited for the job, but even he will experience growing pains.

Even with Newsome staying on for another season, history suggests DeCosta will likely start influence the team’s direction immediately. When the Packers tabbed Mike Sherman as the successor to GM Ron Wolf, they essentially handed over full roster decision-making power a full year in advance of the change. If the Ravens follow suit — likely given the public announcement — DeCosta’s GM tenure essentially begins immediately. As such, he must navigate his new duties while simultaneously fixing a lopsided roster despite the Ravens’ salary-cap concerns.

Headlined by resurgent veterans like Terrell Suggs and Eric Weddle, Baltimore’s defense dominated opponents in 2017, finishing sixth in points allowed (18.9 per game) and third in DVOA. However, the offense sputtered all season as Joe Flacco performing like one of the worst quarterbacks in football. That combination nearly landed the Ravens a wild-card berth, but it doesn’t project as well for the future.

While far from the worst situation in the league, the Ravens have pressing concerns on both sides of the ball. Certainly, the offense needs an influx of playmakers in order to help Flacco rebound in a pivotal 2018 season, but the defense also leans heavily on players near or over the age of 30. The latter could lead to a steep decline, especially if new defensive coordinator Don “Wink” Martindale struggles to replicate the success of his predecessor Dean Pees. DeCosta must figure out how to infuse his defense with younger talent and vastly improving his offense, all while working with the sixth least projected cap space in the NFL. Those challenges will grow even greater if he loses his key free agents to other teams.

Two prominent members of the Ravens’ offensive line, center Ryan Jensen and position-versatile James Hurst, hit the open market next month and could command considerable salaries. Both remain young (26) with their best football seemingly ahead of them. DeCosta might have to let one or both walk in order to address other parts of the roster. Interior offensive lineman Matt Skura comes off of contract this offseason, but his exclusive-rights status means Baltimore can tender him and retain him for 2018. The same situation awaits starting running back Alex Collins. Still, those contracts will cut into DeCosta’s already limited cap resources.

The upcoming draft will also test DeCosta’s decision-making ability in a public forum. While he received credit from Newsome and the organization for many of the team’s best selections, DeCosta must now listen and analyze information from his subordinates and make a call rather than merely offer suggestions to his boss. Moreover, Biscotti specifically mentioned the front office’s recent struggles during the early rounds of the draft as one of the chief reasons for the front-office shakeup, calling those misses “statistically significant” as it relates to Baltimore’s three-year playoff drought. DeCosta must improve the Ravens’ approach in that area early during his GM tenure.

As far as succession plans go, the Ravens probably couldn’t have put themselves in a more confidence-inspiring position than the one with DeCosta at the helm. DeCosta stands a good chance of solving many of his team’s issues and could quite conceivably produce a team better than the one he inherits.

Still, any GM change is a roll of the dice, and the Ravens have no guarantee their seemingly smart gamble will pay off in the end.