Is the Ravens Run Game, Predictable? 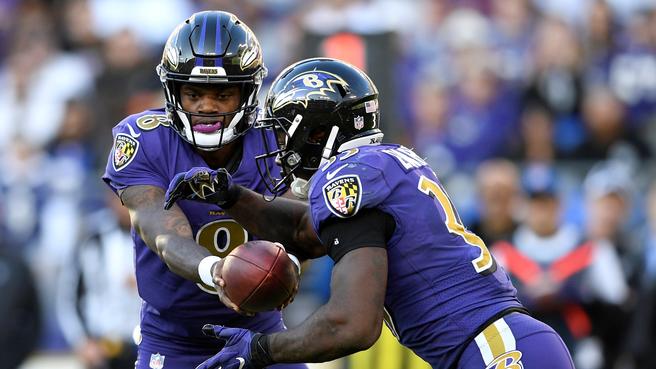 All signs point to the Ravens having heavy emphasis on the ground game this season. When Lamar Jackson took over in 2018, the offense turned into what only the Seahawks do in the pass happy NFL. Run the ball on higher percentage of plays than passing it. Combine that with Greg Roman now running the offense, and the Ravens won’t be fooling anyone when they run the ball on 55%+ of their snaps a game.

Balance is the key to keeping opposing defenses guessing. Keeping them honest. Keeping them from cheating to one side, one gap, keying in on tendencies. As I look at the run game numbers from 2018, (Including Mark Ingram’s usage with the Saints, and Lamar Jackson on designed run plays and RPOs) I wonder if the Ravens are a little unbalanced in areas and giving too much away.

Not too worried about the balance in the way the Saints used Ingram. Pound the ball up the middle as much as he bounced it outside, which could have resulted in more success out there where you find more open space. 78 runs in the A and B gaps. 78 runs to the C and D gaps. Do worry that he was sent out to the right on the sweep or toss pretty often.

We know that patience is not the name of Edwards game. Whereas Le’Veon Bell is heralded for his patience to see things open up before taking off, Edwards is the exact opposite, and still gets the job done at 5.1 Y/A.  But he doesn’t care much for the left side of the field. On sweeps he’s really relying on the right side, and only goes off left guard or wider left just 18% of the time total.

Are you noticing a pattern here?

Lamar Jackson has some interesting numbers. His balance was dead on balls accurate (it’s an industry term) considering direction. 50 left, 50 right. Middle, I’m okay with our quarterback not running it into the teeth of the heavy’s on defense much at all. Great balance on his part, but that is only part of the story.

Jackson’s ability to go left, unlike the running backs, might be by design. Let’s take a look at a staple of the Ravens offense that we saw quite a bit last year.

This is Lamar Jackson’s first start. Alex Collins on his left, with TE Nick Boyle lined up on the right of the line. The strong side is right. The Bengals know that Collins goes right of the right guard 53% of the time and goes wider right behind the TE 64% of the time. Check the two Bengals middle linebackers alignment pre-snap. Hardy Nickerson (56, top, with the towel on his hip) has his left foot on the top hash and his right root outside the hash. Curtis Atkins (55, bottom) has his left foot on the bottom hash, right foot inside the hash.

Here is the snap. RG Marshal Yanda, RT Orlando Brown, and TE Nick Boyle all kick out to the right. The Bengals know that the Ravens like to run right. Which way does it look like the play is going? Where are Collin’s eyes? All signs point to the right. It’s a run/pass option. Or…

…Option 3. Lamar Jackson tucks it and runs himself. Which way? Left! Check the linebackers again. Atkins (55, Bottom) charged at the line expecting to fill the gap vacated by Marshal Yanda who went into pass block mode as Geno Atkins (97) blew through the line. The gap that Collins is heading to. Albeit, without the ball. Hardy Nickerson (56, top MLB) is now inside the hashes. He cheated to his left, the Ravens right as well. Look where Jackson’s eyes are pointing and what is in front. Nothing but green and the first down marker.

Cheating a step or two took Nickerson (56) right out of the play. Not to mention Jackson’s blazing speed. Michael Crabtree looks to have thrown a nice block by the sidelines as well, to keep the running lane open.

Nickerson finally catches up once the deep safety crashed down to make the play. An 11-yard gain on 2nd and 8. Move them chains.

Are the Ravens too predictable in the run game with their tendency to run to the right? Is it on purpose to open up lanes on the left when desired? Would a 50/50 split, or close to it be more efficient in the long run so the defense doesn’t cheat against you? All things being equal, if you get 0 yards when they cheat and beat you, and 10 yards when they cheat and you go the other way, would you take 5 yards every time with even balance and the defense reacting in real time?

Is it simply that their propensity to run to the right is based on future Hall of Famer, Marshal Yanda, being over there?

It’s beautiful, the chess game within the football game.