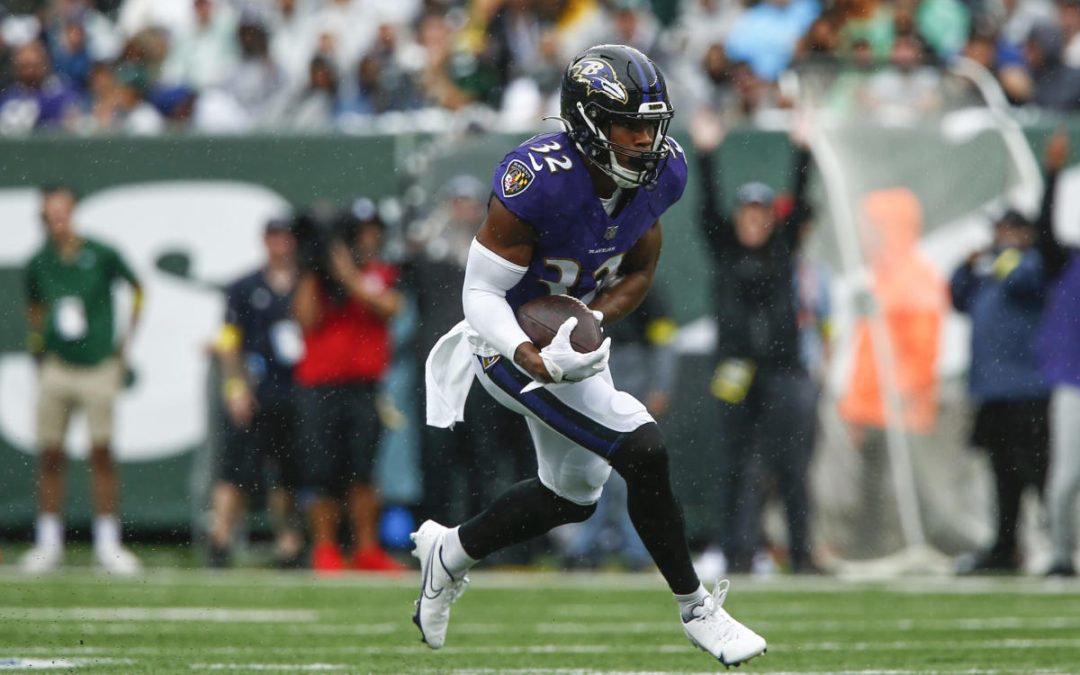 The Ravens followed up an exciting opening weekend with an excellent first half of football against the Miami Dolphins. What followed was a collapse of epic proportions causing them to drop to 1-1 on the season. But with a trip to Foxborough to take on the Patriots on the horizon, there’s no time to mope in last week’s failures. Let’s get into the news surrounding the team as they prepare for Belichick and co.

The Ravens-Dolphins game was full of fireworks, and according to Nikhil Mehta of the Russell Street Report, also full of records and milestones. Some of those were thanks to Lamar Jackson, who became the first player with 300 passing yards, 3 passing touchdowns, 100 rushing yards, and a rushing touchdown in the same game, as well as the first player with a 75+ yard rushing touchdown and passing touchdown in the same game according to CBS Sports. Mehta also cited Next Gen Stats, which reports that Devin Duvernay and Rashod Bateman recorded the two fastest sprint speeds in the NFL this year on their respective touchdowns. Unfortunately, the other history that was made did not paint the Ravens performance in as good of a light. According to ESPN, the Ravens became the first team in 12 years to lose a game in which they led by 21 or more points in the fourth quarter. For reference, that’s 711 consecutive games that teams in the same situation had won. You never want to be the team that snaps a streak like that, especially in a game against a conference playoff opponent that could be fighting for a wild-card come December.

Around the AFC North: Bengals Searching for Answers After 0-2 Start

While the Ravens loss on Sunday frustrated the team and fanbase, the inability of other teams in the AFC North to take care of business provides a silver lining. On Monday, Clifton Brown of BaltimoreRavens.com released a recap of each AFC North team’s performance and where they came up short. For the Bengals, another case of poor pass protection and an inability to move the ball down the field cost them a win against the Cooper Rush-led Cowboys. Brown notes that despite investing loads of resources to completely revamp their offensive line, Cincinnati still leads the league in sacks allowed through two games. They are not the only AFC North team with offensive struggles, however, as for the second straight week the Steelers offense scored just one touchdown. According to Brown, their inability to find the endzone caused fans to chant for rookie quarterback Kenny Pickett to be put in the game. Signs of tensions between current starter Mitch Trubisky and his wide receivers were seen on Sunday, so a change at the position may be on the way. Finally, despite leading by 13 points with under two minutes remaining against one the league’s weakest rosters (the Jets), the Browns allowed victory to slip through their hands on Sunday. Brown explains that in addition to losing the game, Cleveland also lost pass rusher Jadeveon Clowney to an ankle injury. Clowney has already been ruled out for this Thursday’s game between the Browns and the Steelers.

The Signing of Marcus Williams Paying Dividends for Ravens

One of the lone bright spots for the Ravens defense on Sunday was the play of safety Marcus Williams. According to Sports Illustrated’s Todd Karpovich, after recording an interception in his Ravens debut last week, Williams showed up on the stat sheet again in Week 2 by picking off Dolphins quarterback Tua Tagovailoa twice. His 3 interceptions, 3 passes defended, and 22 tackles are all good enough to lead the team. The Ravens signed Williams, who began his career with the saints, to a five-year, $70 million deal in March. His elevated yearly salary created high expectations among Ravens fans, but so far, he has had no problem exceeding them. Karpovich notes that this is the first time in franchise history that a player has recorded three interceptions in the first two games of a season. The last player to record two in such a  stretch? Ed Reed.

The Ravens linebacker room will have a very different look this weekend following a trio of moves made by the team on Monday. According to Kevin Oestreicher of RavensWire, two of these moves involved adding Steven Means and Josh Ross to the IR, while the third saw Kyler Fackrell released from the roster. Means, who was signed as a free agent in June, tore his achilles on his only snap of the game, ending his season before it really got a chance to begin. Ross, who was playing in just his second game after signing as an undrafted free agent in May, injured his foot on a special teams play, forcing him out for at least four weeks. While the Ravens should be fine at inside linebacker, the injury to Means, along with the release of Fackrell, leave the team’s depth at outside linebacker extremely thin. Odafe Oweh and Justin Houston are the only two active outside linebackers on the roster, leaving Oestreicher to anticipate that a move may be on the horizon. Furthermore, with this being the second straight week the Ravens have suffered significant injuries, adding depth throughout the roster may not be a bad idea.

Examining the roster ties between Patriots, Ravens ahead of Week 3

When the Ravens take the field against the Patriots on Sunday, there will be plenty of familiar faces on both sidelines. According to Oliver Thomas of Pats Pulpit, eight players between the two organizations will have played for their respective opponents. For the Patriots, defensive tackles Lawrence Guy and Carl Davis Jr. were members of the Ravens in the mid-2010s. Running back Ty Montgomery (who is currently on injured reserve), pass rusher Matthew Judon, and cornerback Shaun Wade all departed from Baltimore more recently before landing in New England. This will be Judon’s first time facing the Ravens since he left following the 2020 season, and while he was a fan-favorite during his time in Charm City, Ravens fans will be hoping they don’t hear his name often this weekend. Meanwhile, on the Ravens side, practice squad fullback Ben Mason and defensive tackle Isaiah Mack both spent time with New England in the past few years. In addition, Brandon Copeland, who signed with the Ravens on Wednesday, played six games at linebacker for the Patriots in 2020. In a matchup between two of the NFL’s premier coaches, any small advantage could be the difference, so having players who have spent time in the Belichick regime could be useful for Harbaugh’s chances of scheming up a winning strategy.