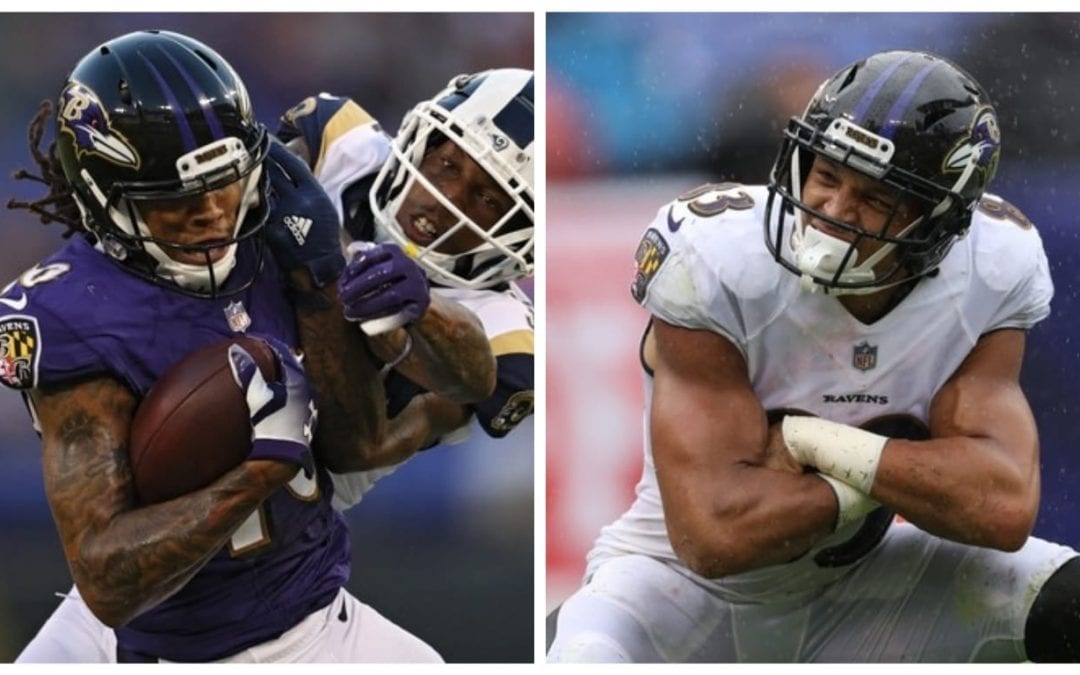 As we move closer to the start of Training Camp and actual NFL games, I will be taking a close look at some of the more interesting position battles that will go down as the Ravens coaching staff trims the 90 man roster to 53. There are a number of positions that will have fierce competition both to figure who will start and who will make the roster. In this series I will examine each player at these positions of interest, what to expect from them in 2019 as well as handicapping their chance to make the roster. We will start with the WR position that has seen significant turnover from 2018 and was recently highlighted by my colleague at BSL Mike Randall as he looked at different roles within the position.

You can discuss the Ravens WR position in more detail on our message board.

1) Miles Boykin (100% roster lock) – It may be surprising to see the Ravens rookie 3rd round WR as the top WR listed, but as a high round pick he should see plenty of action on a Ravens receiving corps that has a lot of question marks, and at this point health is not an issue for him. The expectation is for Boykin to predominantly line up as the “X” WR given his prototypical size and speed. The number of snaps he sees as a rookie will likely be a function of how well he plays as the Ravens do have other options, but I expect Boykin to see a minimum of 50-60 targets as a rookie that should translate to roughly 400-600 yards and a handful of TDs.

2) Chris Moore (95% roster lock) – Moore was in line for a hefty role in the Ravens 2019 offense before the draft happened, and while his role should probably be somewhat smaller with the additions of Boykin and Brown, there should still be plenty of snaps to go around. Moore has also been a core special teamer so he is as close to a lock as can be, with his contract status (4th year of rookie deal) being the only thing working against him. He could be used as a trade chip or flat out released under extreme circumstances. When on the field, Moore has been a bit of a conundrum flashing impressive potential at times but also showing very little consistency. He has been far more effective running routes out of the slot, but he is likely to see much more time outside where he will be the primary competition for Boykin as the starting “X”. When all is said and done, I would not be surprised if Moore is the Ravens’s 2nd most productive WR in terms of catches and yards in 2019, but I wouldn’t expect totals much greater than 50 receptions and 700 yards.

3) Willie Snead (90% roster lock) – The only reason Snead is not higher on this list is his contract status. He’s entering the 2nd year of a two year contract and is actually one of the Ravens largest cap hits in 2019. If the team was desperate to create cap space, Snead could potentially be traded or released to free up a large chunk. That said, Snead was the Ravens most productive WR in 2018 and in all likelihood he will be their most productive WR in 2019 as well. Playing primarily out of the slot, Snead has demonstrated throughout his career that he has a talent for getting open and also has the ability to make a few players miss after the catch. I would expect a similar 2019 to what he had last season, catching 60-70 balls for 700+ yards.

4) Marquise “Hollywood” Brown (100% chance to be on the team/80% chance to be on opening day roster) – As the Ravens 1st round pick in the 2019 draft, there is no doubt that Brown will be part of the Ravens organization in 2019. However, due to a lingering foot injury, there is a chance he remains on the PUP to start the season. While it is unlikely that he misses any or all of the season, after the Breshad Perriman nightmare I would not consider anything impossible. Assuming health, Brown is probably the 2nd most exciting player on the Ravens offense after Lamar Jackson. Brown’s speed is extremely rare and while he did not run at the NFL Combine, his tape would suggest a player that runs in the low 4.3s. That kind of speed paired Jackson’s unique skill-set creates any number of interesting possibilities for Greg Roman and the Ravens offensive coaches. At Oklahoma, Brown was aligned all over the formation and was extremely effective out of the slot as highlighted by Mike Randall. He could also use his speed to threaten defenses lined up outside, and one could also envision him used on jet motions similar to how Kansas City has utilized Tyreek Hill. Given Brown’s health, I don’t think the Ravens will want to over-use him, especially early on, so a target share similar to Boykins seems likely. However, given his game-breaking speed, if chemistry between him and Jackson builds early there is a chance he quickly becomes the Ravens most productive WR.

5) Seth Roberts (60% chance to make roster) – Roberts was a late signing due to his release from Oakland, and while he did not sign for a huge amount (1 year, $2M total), he received $1.2M in guarantees increasing his chances of making the final roster. Similar to Snead, Roberts is a player that has played primarily out of the slot throughout his career, and while he is not as effective as Snead, he has superior size and is considered a better blocker which may have unique value in the Ravens offense. It’s hard to imagine Roberts being a major contributor, but I could see him garnering 30-40 targets for ~300 yards in the 2019 season.

6) Jaleel Scott (50% chance to make roster) – 50% may feel kind of high for the 2nd year player who was on the injured reserve as a rookie after failing to make any noise in the preseason. However, Scott stood out during OTAs and his size makes him a bonafide redzone target for Lamar Jackson and he was a 4th round pick just a season ago, so the Ravens saw something in him that they like. Right now the 6th WR spot should be up for grabs and with a strong showing early in the offseason, Scott may have a leg up on his competition.

7) Jordan Lasley (40% chance to make roster) – Lasley is in a similar position to Scott being a second year player that was not a high draft pick. Unlike Scott, Lasley was on the 53 man roster for the entirety of the 2018 season, but he was a healthy scratch each week as he did not contribute on ST. In order for Lasley to make the roster, he is going to have to demonstrate some value aside from being a productive college player with upside. The fact that he has worked out with Lamar Jackson in the offseason may help his cause, but he is going to have to show it on the field.

8) Michael Floyd (20% chance to make the roster) – Floyd is a former 1st round pick that had some good years in Arizona before a combination of injuries, ineffectiveness and off the field problems hijacked his career. He’s bounced around the league over the past 3 seasons, and because of his pedigree he might have a chance to stick somewhere, but I find it unlikely he finds his home in Baltimore unless he really impresses.

9) Antoine Wesley (10% chance to make roster) – Wesley was viewed by many as a draftable prospect, but for one reason or another he slipped through the draft and the Ravens managed to scoop him up as an UDFA. At 6’4 with hops and a big catch radius, Wesley has some NFL potential, but it will be hard for him to distinguish himself in a WR group that has a lot of size. He will definitely be a practice squad candidate who might find himself on another roster if not in Baltimore.

10) Jaylen Smith (5% chance to make roster) – UDFA and Lamar Jackson’s former teammate at Louisville is likely on the 90 man roster simply because of the chemistry that he had with his college QB. Smith does possess good size, but is a long shot to make the roster. Smith will be a good candidate for the practice squad.

11) Quincy Adeboyejo (5% chance to make roster) – The former UDFA and practice squad player is healthy after a 2018 injury that cost him the entire season. He has good size and could compete for a roster spot, but it’s more likely he ends up back on the practice squad or looking for work.

12) Joe Horn Jr. (1% chance to make roster) – Unlike most of the fringe WRs on the Ravens 90 man roster, Horn is more diminutive at 5’10. He made the Ravens roster after a Minicamp tryout so there must be something there the coaches like.