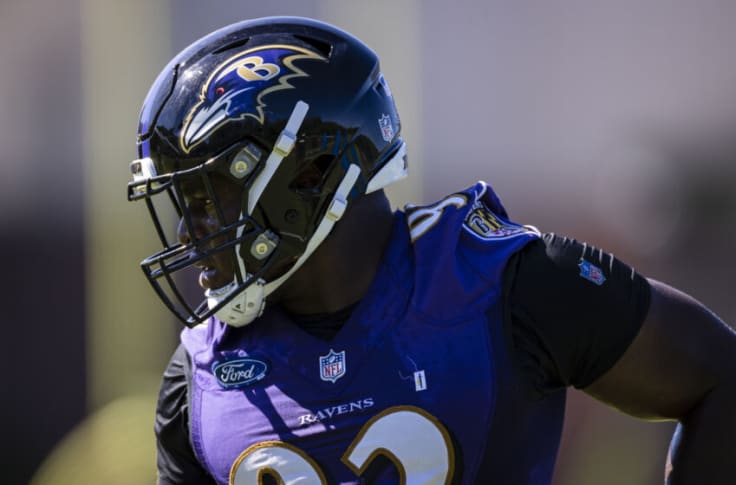 This past week the pads came on, much to the delight of the defense. Live hitting turned the tables on the offense who seemingly lit up week 1. Backup quarterbacks Trace McSorley and Tyler Huntley shined in the first week of camp. But the defense has been grabbing all the headlines in week 2. Well, the ones that don’t involve Lamar Jackson anyway, and his return to camp on Saturday after his second battle with COVID-19. One that head coach, John Harbaugh, pointed out, “he got hit pretty hard with the symptoms”. We’ve yet to hear from Jackson since his return.

Discuss you thoughts on these topics on our message board.

ESPN’s Jamison Hensley predicts that the Ravens won’t reach an extension with Lamar Jackson before the regular season begins. All things considered. I’m okay with that right now.

The defense seemed to win the week, but keep in mind, that the offense has been down many key players.

New linebackers coach, Rob Ryan, expressed how violent his group could be regarding second year linebacker Malik Harrison. But also talked up Patrick Queen, as the two have been working together to better understand Don Martinadale’s defense.

Ryan said of Queen, “Not too often do you come into a place with such a great talent and a guy that’s just striving for more. He’s such a smart guy. People know he’s physical and he’s athletic, but you don’t realize how smart he is. He’s a big thinker.”

Bradley Bozeman, if you’ll remember, had some snapping issues on the first day of camp. But he’s found his groove and it hasn’t been an issue since. He gave a little insight to what the center must process as he’ll be tasked as the signal caller for the other lineman.

“You’re looking at everything, honestly,” Bozeman said. “It’s the entire defense. It’s from safeties rolling down, corners pressed, corners off, how many people we have in the box. What’s going on? How one front dictates how we’re going to run a certain play. Honestly, it’s everything. We run a pretty complex offense here, and they ask a lot from their offensive linemen, and we try to provide that comfort for them.”

We have high hopes for Justin Madubuike to be one of the breakout stars on the defensive front. Bozeman went on to say in his time with the media that Madubuike, “…is one of the harder people I’ve ever had to move on defense.” Calais Campbell told him he, “has the chance to be a very special player in this league.” Derek Wolfe called him a “monster” and expects him to develop into an All-Pro.

Wolfe continued to compliment him, saying, “If you were going to draw up who you wanted in a three-technique, that’s how you’d draw them up. His explosiveness, his strength, his bend – he’s the full package, man. … And he’s a smart kid too, so he’ll pick it up quick. I love what I’m seeing from him.”

The physicality of some freakish athletes in Odafe Oweh (uh-DAH-fay Oh-way) and Ben Cleveland has showed up now that the pads have come on. Odafe was spotted in the backfield often getting what would be sacks if you could hit the QB. He also chased down Tyler Huntley from behind, going all the way across the field to get there. Oweh has also been tough in setting the edge on run plays. Cleveland was seen planting defensive players on their backs in run blocks. But still has technique to work on in pass blocking sets.

Injuries are starting to pile up as Jimmy Smith had everyone holding their breath when he was carted off the field on Friday. An MRI determined that the injury is a low ankle sprain that will sideline him a couple weeks. The diagnosis could have been much worse for the 33-year-old cornerback.

Rashod Bateman returned to practice Monday after missing one day for precaution reasons related to muscle tightness. But he was not seen at practice on Friday or Saturday.

Miles Boykin left practice this past week with a hamstring, and Marquise Brown is still sidelined from a hamstring injury on day two of camp that appears to be more serious that first anticipated. However, Brown was doing some condition drills at camp on Saturday. The Ravens will take a cautious approach with Brown. You don’t want to senselessly re-aggravate the injury.

Kevin Zeitler left Tuesday’s practice with a foot injury. There hasn’t been much chatter about it, signaling that it is nothing serious. I’d suspect he probably had a veteran’s day off in there last week as well. Expect the Ravens to be overly cautious when it comes to injuries in camp. Especially to veterans who don’t need so many reps to be ready when it matters.

On defense, CB Iman Marshall was activated from the PUP list, while at the same time, S DeShon Elliot was absent Friday with a non-COVID related illness. But he did return Saturday.

This week the Ravens will prepare for their first preseason game coming up Saturday. They host the New Orleans Saints at 7:00pm. I will be interested to see with only three preseason games rather than four, if it changes the player usage approach we’re used to seeing in preseason. How many reps will veterans get, other starters, role players, and the guys hoping to land on the practice squad or auditioning for other teams.

As always, get out of this game injury free.