Reflecting On Gary Thorne’s Time With The Orioles 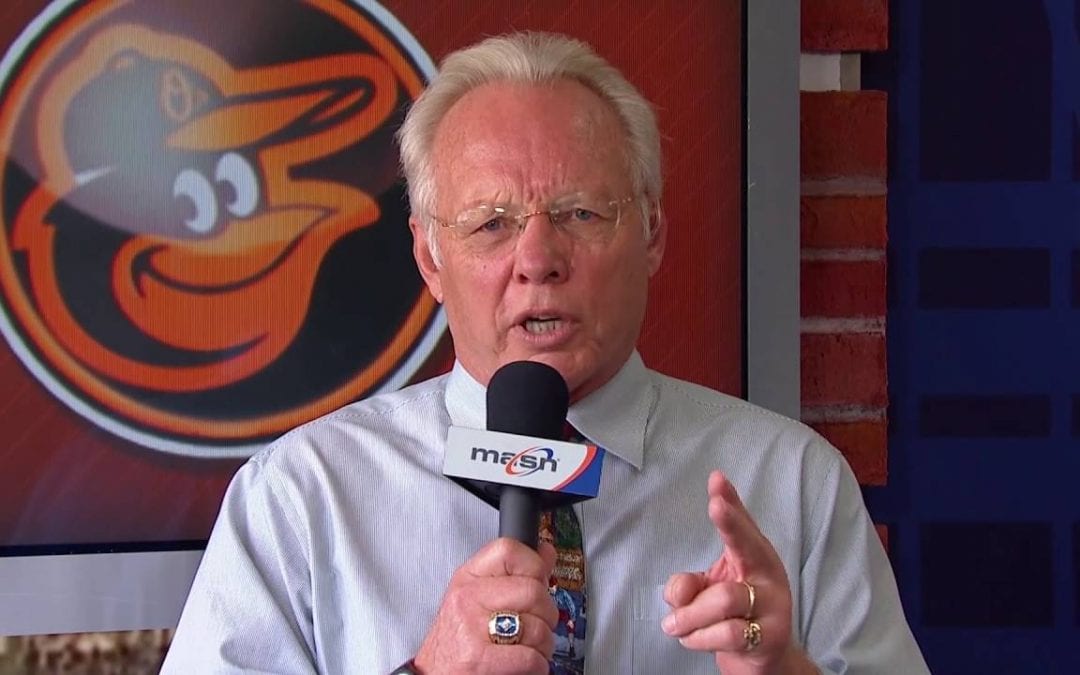 “Slow ground ball, Manny Machado barehanded. Don’t throw it away. DON’T THROW IT AT ALL. WHAT A GREAT PLAY TO HARDY. And Wieters will put the tag on him.”

Just by reading this quote, I think you can picture the exact play I’m describing and can hear the voice of who said it. On September 12, 2012, a young third baseman named Manny Machado perfectly executed a fake throw to first base, catching Tampa Bay’s Rich Thompson out of position to get the final out in the top of the ninth and Gary Thorne delivered an iconic call to go along with the iconic play.

“20 years old and knew exactly what to do,” Thorne added, with a sense of amazement. In 2010, the Orioles took Machado with the #3 pick out of high school and just two years later, he made one of the best plays of his career as a rookie.

For just about every memorable moment of the 2010s for the Orioles, Thorne was in the broadcast booth, serving as the voice of a successful decade of Orioles baseball after the 2000s, which saw no winning seasons and far more lowlights than highlights. While Thorne was hardly the only person synonymous with the winning and return of relevance in the 2010s for Baltimore, he’s present in those moments more than Buck Showalter, Adam Jones, Manny Machado or anyone else who will always be associated with the run of success from 2012 to 2016.

My favorite example of how Thorne was always present in the excitement of the Orioles was a walk-off homer against the Tigers in 2013 from Chris Dickerson. Dickerson’s name probably doesn’t ring a bell to you, given he spent just 56 games as an Oriole in a 7-year career. That said, one of his 17 career homers turned a ninth-inning, 5-4 Orioles deficit with two outs into a 7-5 victory with a shot to right-center field. While Dickerson wasn’t memorable outside of this homer, Thorne was and always will be. Watching the clip now, it feels impossible to not smile when you hear the crowd roar as he excitedly says “GOODBYE, HOME RUN.”

When Hyun Soo Kim, who was booed on Opening Day, provided a pivotal go-ahead, pinch-hit homer in Toronto, Thorne was in the booth for Kim’s biggest moment in American baseball. At Fenway Park, with Chris Davis on the mound, Thorne broadcasted the two innings of work from the first baseman with a mix of amusement and amazement. When a perfect relay from JJ Hardy to Matt Wieters took the game into the 17th inning, Thorne delivered one of my favorite lines: “WE ARE NOT DONE YET.” He seemed equally excited about the play and shocked the Orioles survived an inning of Davis pitching without losing.

What makes Thorne truly special is that for the youngest generation of Orioles fans, he was the only announcer we’ve really known. When Thorne had the call for the Curse of the Andino, I was in ninth grade and I startled my sophomore roommate in the University of Maryland’s Elkton Hall when Kim came up clutch in Toronto. Also, what wound up being Thorne’s final game with MASN happened just a few months after I finished college.

Those exciting moments of truly contending for the first time in 2012 were accompanied by the voice of Thorne, reacting with excitement during games like the Cal Ripken statue game against the Yankees. When the Orioles saw their 6-1 lead reduced to a 6-6 tie heading into the bottom of the eighth, it felt like a reminder of everything the Orioles had done against the Yankees from 1998 up until that point. Then Adam Jones homered, and so did Mark Reynolds and Chris Davis, with Thorne’s “GOODBYE, HOME RUN” calls getting more excited as the Orioles lead was boosted by four runs with three swings. The roar of the crowd combined with the excitement of Thorne was the first time I think anyone too young to remember Eddie Murray or Cal Ripken as an Oriole believed this team was really a postseason contender and Thorne’s excitement will always be a big part of that moment for me.

Regardless of if you were born in 1997 or 1947, if you watched the Orioles on television with regularity in the 2010s, Thorne’s voice was a familiar presence for years. I’d roughly estimate fans heard Thorne’s voice for about 250 to 300 hours throughout a season, which is a lot of time to spend with one person, even if it was over the television. There’s more baseball games for your team than any other American sport, college or pro, so the baseball broadcaster becomes a regular part of your life for six months, creating a special connection where you’re spending three hours with them virtually every night from April to September.

Even as the Orioles started to go downhill after 2016, it felt like Thorne still represented the fans in becoming increasingly incredulous over things like Gleyber Torres’ success vs. the O’s in 2019 and embracing the absurdity of things like Stevie Wilkerson recording a save against the Angels.

While Thorne wasn’t mistake-free and had some odd quirks like his struggles with pronouncing the name of former Blue Jays slugger Edwin Encarnación, it still felt like you’d miss out on something that’d make you smile one way or another if you decided to watch MASN on mute. A Twitter account known as @DrunkGaryThorne gained over 6,000 followers out of love, not frustration, that Thorne sometimes sounded like he treated himself to an adult beverage or two before the game. You could argue that kind of broadcasting wasn’t strictly professional but I also don’t think the kind of games where the Orioles would trail 7-0 after three innings after a dud from the starter deserved a stoic broadcast focused just on the game.

From the moment Manny Machado was traded in 2018, we knew it was the beginning of a new era for the Orioles. Adam Jones is in Japan, Zack Britton is a Yankee, JJ Hardy is retired and Buck Showalter is a television analyst. Now, Thorne joins the others in no longer being a part of the Orioles. It’s a bittersweet reminder that players, managers and even broadcasters don’t get to spend forever as part of your favorite team.