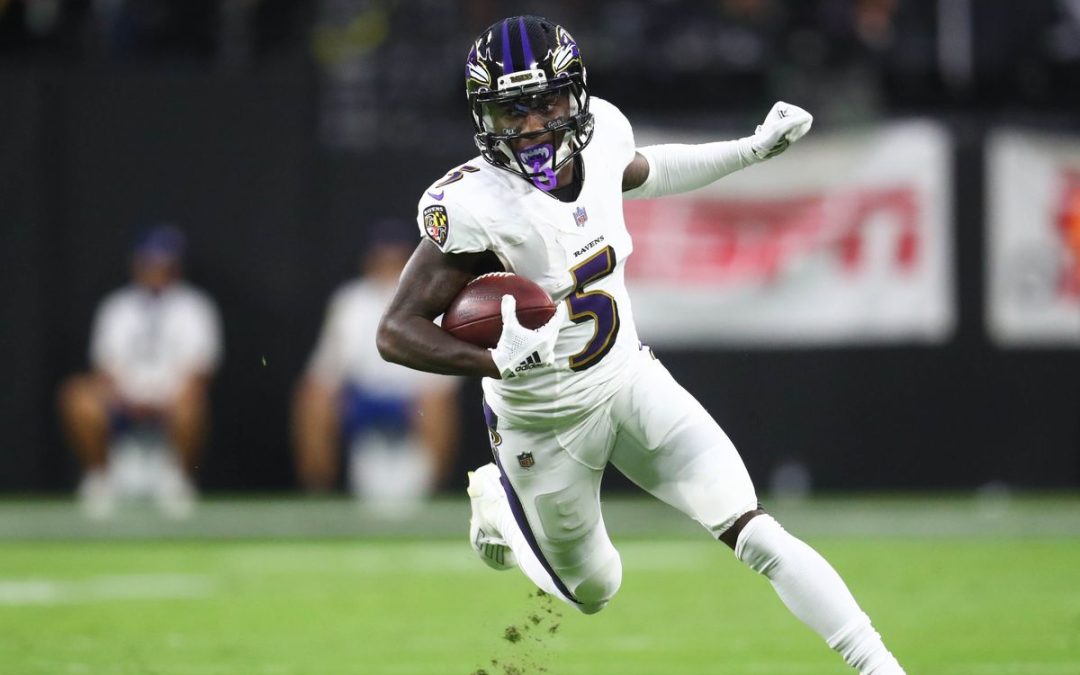 2019 marked a changing of the guard in Raven’s front office. Long time GM; Ozzie Newsome officially stepped down as the Raven’s GM and turned the keys over to his understudy, Eric DeCosta. DeCosta was the assistant GM from 2012 to 2018 until finally taking over the reigns as the team’s GM in 2019. Decosta has been with the Ravens since their inception in 1996, he has held numerous positions in the front office including; player personal assistant, area scout, director of college and director of player personal. DeCosta is widely viewed as one of the best general managers in the league and was named executive of the year in 2020 for his work in the 2019 NFL draft and free agency period. It’s been 3 years since his first NFL draft as the general manager and below I will review every pick as they currently stand.

Brown represents DeCosta’s first ever NFL draft pick. The two will always be associated with one another in that respect. In terms of the pick itself, Brown was coming off of a Lisfranc injury in college and there were some skepticisms with drafting him over the likes of D.K Metcalf or A.J Brown. Though Brown hasn’t been as good as the aforementioned Metcalf and Brown, he has improved every season. His yardage totals have increased from 710, 965 and then 1008 this season. His Pro Football Focus (PFF) grade during that stretch averages out to a 72 over his 3-year career thus far. Hollywood has played an integral role in the development of Lamar Jackson as the two are very good friends off the field and have good chemistry on the field when both are healthy and playing in sync. The Ravens have already announced they will exercise his fifth-year option, so look for Hollywood and Lamar to be in Baltimore for a while.

Ferguson was drafted in the third round of the 2019 NFL draft and most analysts and pundits thought this was a steal of a pick. Ferguson was coming off of a stellar 2018 season at Louisiana Tech where he had 26 tackles for a loss and 17.5 sacks. He also became the NCAA FBS career sack leader in 2018 and was named the MVP of the 2018 Hawaii Bowl. But his elite college play did not transition over to the NFL. Ferguson has managed only 4.5 sacks since being drafted and has been largely disappointing. He has gotten worse every year in terms of his production, declining in total pressures, hits and sacks. Look for the Ravens to move on from Ferguson and retool at the edge position.

The Ravens drafted a small, speedy guy in Round 1 by taking Hollywood Brown. In Round 3 they drafted a 6’4 big bodied wideout in Boykin. Boykin, like Ferguson was viewed as a very good pick by most pundits and analysts. Boykin impressed with his 4.42 40-yard dash at the combine coupled with 6’4 frame. He had all the makeup to be a good wide receiver at the next level. But through three seasons, Boykin has just 33 catches for 470 yards and 7 touchdowns. His PFF grade during that stretch has been a 58.1. Though he has not been a productive wide receiver, his run blocking grades have always been above a 70 which is solid. But the front office will not extend a wide receiver for simply being a good blocker. The team can save over 2 million dollars by cutting Boykin and I suspect he will be a cap casualty.

Hill played at Oklahoma State and never averaged below 5.5 yards a carry in college. He also had an impressive combine, clocking a 4.40 forty-yard dash while doing 21 reps on the bench at 198 pounds. He was being viewed as a welcoming addition to pair with Lamar Jackson as both players possess speed that can be used in the Ravens attacking run game. But Hill was buried on the depth chart behind Mark Ingram and Gus Edwards, so to be fair, he hasn’t gotten a real opportunity. He has been a good special teams player thus far and the coaching staff always tends to keep guys around if they perform well on special teams. Coming off of an Achilles injury, it’ll be hard to keep him around next season but given his special teams value, he might stick around.

Powers was selected a few picks after Hill in the same round. After sitting behind Marshal Yanda during his Rookie season, Powers did not play at all, except when he started the last game of the season against the Steelers where he had a PFF grade of 82.1 Seeing that performance, Ravens fans were encouraged by the former Sooner. But in 2020, Powers saw his season grade dip to 57.1 followed by a slightly better year in 2021, where he finished the season with a 66.3 grade. Powers is a better pass blocker than run blocker, but still needs to improve in both areas if he wants to compete for a starting position. Him and Ben Cleveland rotated in games during the 2021 season but neither guy showed enough to instill confidence in the coaching staff. The Ravens can move on from Powers and save 2.5 million but I have a feeling he may be back for another season.

Four picks after Powers, DeCosta selected Marshall out of USC. Marshall has been played on IR for 3 consecutive seasons and has had back-to-back torn ACLs. Marshall has one career tackle in his 3 seasons. He has only 5 career snaps on defense. All signs point to a release.

With Mack; the Ravens were hoping they found their next stud interior defender. Mack stands a 6’1 and 340 pounds. A similar build to former run stuffers, Brandon Williams and Michael Pierce. Mack was placed on IR during his rookie season, he only appeared in one game. He was released the following offseason to get below under the 80-man roster limit. He has subsequently been on 5 different teams over the next 2 seasons, failing to appear in any games. He was drafted by the Tampa Bay Bandits of the USFL and will look to resuscitate his career.

DeCosta’s last pick in the 2019 was the dual threat QB out of Penn State. McSorley finished his college career with 93 passing TDs and 30 Rush TDs. The former Nittany Lion was drafted as essentially an insurance option in case Lamar ever went down. He is most famously known for his 3rd and 10 completion to Willie Snead on Monday Night Football to keep a drive alive against the Browns where Lamar was forced the leave the game due to cramps. Later in the drive he suffered a knee sprain and was forced to leave the game. But he will always be remembered for extending the game and giving the ravens a chance to eventually come back and win. However, he did not play much at all and ended up being signed off the Ravens practice squad this past season by the Arizona Cardinals.

In conclusion, DeCosta’s first draft was below average. As most of the guys are either not on the team or are in danger of being released. Hollywood Brown was the only “hit” of this draft class. Another notable player that ended up being undrafted was Patrick Mekari. Mekari just received a contract extension as he is one of the most versatile linemen the Ravens have. DeCosta is a wizard at making sound free agency/trading moves but his first draft leaves something to be desired. Hindsight is always 20/20 when looking back at old drafts but this will be a draft the Ravens front office will want to forget.