Is Rick Peterson’s Time Up? 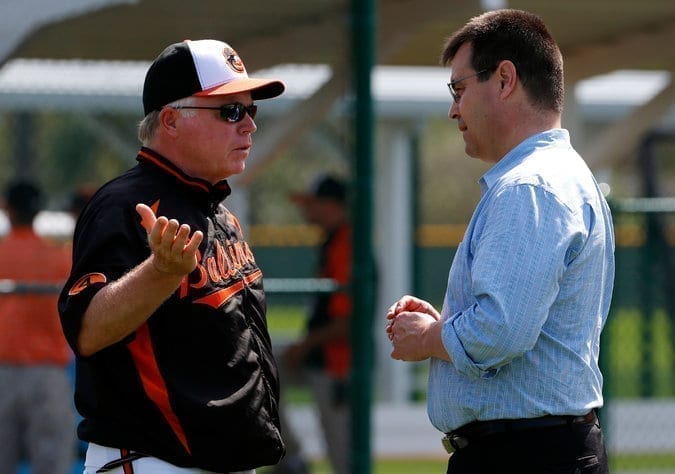 The time has come for the Orioles to make hard choices — but the first choice they make may not be especially hard, nor may it even be much of a choice.

If recent reports from ESPN’s Jerry Crasnick and FOX Sports’ Ken Rosenthal are true, it is time for the Baltimore Orioles to part ways with Director of Pitching Development Rich Peterson.

There are any number of reasons this makes sense outside the context of that specific reporting; the main one being that on Peterson’s watch, the Orioles have not particularly developed any pitching of which to speak. The crowning jewel of Peterson’s tenure so far has been the starting pitching of Miguel Gonzalez from 2012 to 2014, and it’s unclear how much of that is due to Peterson and how much that is due to Gonzalez finally getting healthy for the first time at the age of 28, following a meniscus tear and Tommy John surgery. It’s fair to give Peterson at least some credit (specifically regarding the development of Gonzalez’s change-up). It’s also fair to note that more is expected of a major league pitching development coordinator than one success story, and that Gonzalez fell off a cliff this season.

(Join the discussion of this story on the BSL boards here.)

Gonzalez also fits the mold of many of the O’s starting pitching acquisitions under Dan Duquette: finished or almost finished products with possible, but not substantial, upside. Bud Norris was supposed to be another one of those guys — he lasted a year before turning back into a pumpkin. Wei-Yin Chen came over from Nippon Professional Baseball an entirely finished product and has more or less been what he is — a solid left-handed pitcher who doesn’t go quite as deep as you’d like into games and gives up a tad too many home runs — for as long as he’s been in the league. Ubaldo Jimenez has remained an inscrutable disaster since his signing, and guys like Jair Jurrjens and Freddy Garcia have come and go without registering any real impact. None of these guys are the guys that Rick Peterson was hired to work with primarily (though many spent time in the minors at one point or another, especially in the Jurrjens tier of asset salvaging), and their failure to turn into superstars on his watch is hardly a failure on his part — just as them doing so would be difficult to cast as his success.

No, the true measure of a director of pitching development is how guys like Kevin Gausman end up. Or Jake Arrieta. Or Eduardo Rodriguez. The big-ticket, high-upside young talent guys. And the consistent book on Peterson’s Orioles about handling those players is: constant interference in what makes them comfortable pitching. This is not entirely Peterson’s fault; the regime that ruined Arrieta was in place well before his arrival, though Peterson’s bizarre beliefs about the cut fastball didn’t help in the slightest. But one of the major reasons for Rodriguez’s underperformance in the high minors — and his control problems there — was that he was not permitted to use the change-up he was comfortable with; Boston allowed him to throw the pitch he was used to throwing, made some slight mechanical tweaks, and now appear to have a blossoming middle-rotation starter on their hands.

Meanwhile, Kevin Gausman — a guy who came to the Orioles more of a finished product that either Arrieta or Rodriguez, and who has arguably more raw talent than either — continues to struggle with commanding the two major league quality pitches he does have in his fastball and change, and has made very little progress developing a consistent third offering. He has seen his development marred by constant changes in level and role, often at the whim of whatever the front office seemed to have planned for arguably far less important (but also less movable) veteran starters in the rotation. Outside of Dylan Bundy and Hunter Harvey — both of whom have lost more or less this entire season of development to injury — Gausman is the only high-level arm on which Peterson’s efforts can be judged. The conclusion on that case study alone is that, frankly, a change of direction is needed.

Is that entirely fair? Of course not. We have nowhere near the amount of information necessary to judge Peterson’s specific coaching efforts vis a vis Gausman here in the public sphere. But does it need to be entirely fair? Is any decision made in a business environment based largely on perception entirely fair? No and no, respectively. Two reputable journalists have reported that the same external perception of Peterson’s efforts — the perception of an organization going even further backwards in its attempts to develop starting pitching after over a decade since the franchise’s last unalloyed success story in Erik Bedard — is matched by an internal perception that Peterson is a problem.

At this point, if there is friction between Duquette and Showalter due to the way the club is being managed — and I would suspect that there is that friction, given that the club is underperforming expectations, said friction is being reported and both men’s management styles have always led to that friction — compromises must be made. Both Showalter and Duquette make far too much money and are under contract for too much longer for either man to be fired before the end of next season at the very earliest, and owner Peter Angelos already made his feelings known about either of them trying to jump ship during the Toronto saga this offseason. That means if the Orioles front office is going to keep it together this winter and into next year, peace offerings are probably going to be necessary from either side.

The old baseball guys don’t like Peterson; you know this is true because the old baseball guys have never liked Peterson, even from his days with the Mets. Generally speaking, even back then, they had a point: a lot of his ideas — like much of his prescriptive “biometric analysis” and the cut fastball nonsense — have no underlying baseball logic behind them, and sound a lot like quackery. And regardless of what you think about any specific proposal or tactic of his, it is impossible to ignore that under his tenure as Director of Pitching Development, little to no pitching has actually been developed.

So if sacrifices must be made, Peterson is a worthy candidate for sacrifice. He’s had a few years in Baltimore to pad his resume, can claim at least one feel-good success story to his name in Gonzalez, and can be let go with a glowing recommendation from his former bosses — who then get to turn around to Showalter and point to his departure as a sign of everyone working together. Unless the Orioles run the table and slip into the postseason as the second Wild Card, changes are going to be coming this offseason in the Warehouse; this is the least that the operations people can do to appease the on-field and scouting people.

After all, none of Showalter’s people are under contract for next year. And if some or all of them leave while Peterson stays, things could get very dicey in Baltimore in precisely the way the Red Sox, Yankees, and Blue Jays have been hoping they will ever since two of baseball’s strongest personalities started trying to co-exist here four years ago.