Rising From the Ashes 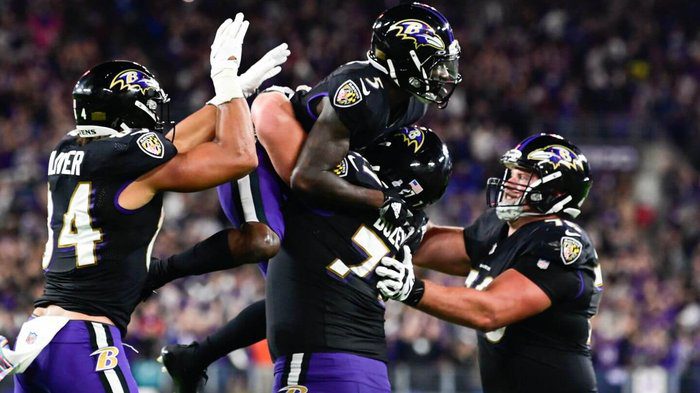 The mascot of the Baltimore football franchise is a Raven but we may have to petition the league to change it to a Phoenix. Like the mythical creature, Baltimore rose from the ashes for the third time in the young season to pull out a most improbable 31-25 overtime victory over Baltimore’s former franchise on Monday night at The Bank. This win is going to go down in Ravens folklore. It will be mentioned in the same breath as the first ever victory over Jacksonville that set tone for the 2000 season, the furious comeback against Seattle in 2003, Flacco to Smith in the waning moments at Heinz Field in 2011 and the Ray Rice 4th and 29 game in San Diego. As memorable and unlikely as the comeback was, in order to have situation like that unfold, you have to be in the position to stage said comeback. That of course means that you must have played poorly for stretches of the game to put yourself in said position. And, indeed, the Ravens did that in spades.

It’s much more palatable to unpack a plethora of mistakes and poor play in the wake of a victory. We know the bottom line is getting the win but there are some recurring issues that must improve or these nail biters are going to start going the other way. The main culprits that got the Ravens into the seemingly insurmountable 2nd half deficit were overall poor play from the inside linebackers (tackling, not getting off blocks, slow to react, not getting proper depth when dropping into coverage, to name a few) and the sudden disappearance of the Ravens’ vaunted rushing attack. I don’t want to gloss over these issues by any means but for the purposes of this discussion, I want to highlight the simply phenomenal elements that contributed to the come from behind win.

Snatching victory from the jaws of defeat doesn’t come to pass without a little bit of luck. It was apropos that Week 5 closed out with an erratic performance from a kicker. There were missed extra points and missed field goals galore this weekend; highlighted (or low lighted, as the case may be) by the wild ending in the Green Bay-Cincinnati game. Granted, Colts kicker Rodrigo Blankenship suffered an injury in pre-game warm ups, which obviously impacted his mechanics. Regardless of how we got there, it was the uneven performance by Blankenship that was a major contributing factor to the victory. On the evening, the Colts placekicker missed an extra point and 2 field goals, which included a potential game winner. Blankenship also had a field goal attempt blocked by Calais Campbell that conjured memories of the 2006 Ravens-Titans contest, which was sealed by a Trevor Pryce blocked field goal. Field goal blocks don’t happen often, the elements have to come together just right and even if they do, the defender has to get their hands up at just the right time. Needless to say, the football gods smiled down on Baltimore last night.

In the wake of the Monday night win, the majority of the buzz has been around the Ravens superhero wearing number 8; and rightfully so. Lamar Jackson authored one of the greatest single game performances in league history. The stat line for Jackson on Monday was video game-esque…..37-43 for 442 yards and 4 TDs, a completion rate of 86%, a QB rating of 140.5 and an eye popping 10.28 yards per attempt. Just for a garnish, he added 62 yards rushing.

Facing a double digit deficit in the 2nd half, everyone knew the Ravens had to throw the football. Despite knowing what was coming, the Colts were seemingly powerless to stop it. The only blemish on Lamar Jackson’s performance was a fumble at the Colts 1 yard line at the back end of 14 play drive. Jackson’s ball security issues continue to creep up at bad times, particularly inside the opponents’ 5 yard line. With that said, Jackson bounced back and led the offense on 4 consecutive touchdown drives (along with 2, 2 point conversions) in the 2nd half and overtime. A simply breathtaking performance for sure but Lamar didn’t do it alone.

If Lamar Jackson was the number 1 reason for a Ravens win on Monday, Mark Andrews and Marquise Brown have to be 1a and 1b. Andrews and Brown were targeted a combined 23 times and hauled in 20 of those targets, good for a collective 272 yards and 4 TDs. Andrews also contributed a pair of absolutely critical 2 point conversions. For Andrews, this was the signature game that many fans were waiting for. No disappearing act, no drops, just great route running, solid fundamentals, toughness and even a touch of elusiveness on a 4th quarter catch and run. And if it wasn’t the Ravens tight end making plays, it was Hollywood Brown.

There was much consternation and hand wringing after Brown’s drops against the Lions but perhaps the ill feelings towards Hollywood were a bit overblown. In the 2 games preceding his case of the yips in Detroit, Brown had 12 receptions for 182 yards and 2 touchdowns. In the 2 games after the tilt against the Lions, Hollywood has 13 grabs for 216 yards and 3 scores. Even prior to the bad drops during the Detroit game, Brown had 3 catches for 53 yards. On the young season, his receptions per game, yards per game, yards per reception and catch percentage are above his career averages to this point. He’s also no longer shying away from contact or falling down at the first sight of a defender. Brown has shown not only shiftiness in picking up extra yards after the catch but also toughness; taking on defenders and fighting for more yardage. Long story short, Hollywood Brown has been the Ravens best offensive player not wearing number 8.

It goes without saying but the 4-1 Ravens could be 5-0, 0-5 or anywhere in between. Fact of the matter is that given the nature of the NFL, with parity through the salary cap, relatively even distribution of talent, etc, many teams are a handful of plays away from having a dramatically different record than what they currently have. The Baltimore Ravens are far from a perfect team. They have plenty of things to work on and improve; whether they’re capable of improving on those deficiencies remains to be seen. With that said, whatever they’ve lacked through the first five games of the 2021 season, they’re making up for in heart and “want to”. I don’t imagine that the heart stopping, late game, back from the dead type wins can continue but for the fan in me, it’s been a hell of a lot of fun so far.